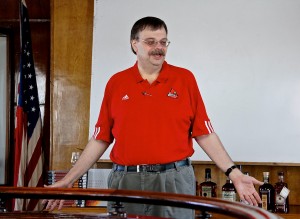 Michael Veach delivers a lecture on bourbon history in Chicago in September 2013.

If you are a fan of whiskey in general and American whiskey in particular, then Michael Veach may have your dream job title: bourbon historian. Veach pursues his expertise on bourbon lore for the Filson Historical Society which — not surprisingly — is located in Louisville, Kentucky. He conducts numerous lectures on the subject and is author of the book Kentucky Bourbon Whiskey: An American Heritage.

The Independent Spirits Expo, a major industry event featuring the products of many craft distilleries, is coming up Tuesday (Sept. 30) in Chicago, and Veach will be in town to lead discussions (see below). So to warm up, we asked Veach for his perspectives on the growth in consumer interest in bourbon and its still-small but expanding craft sector.

Good Food on Every Table: We hear a lot about there being a boom in the popularity of bourbon, with some talk even about the possibility of shortages. How big is the bourbon market, and how much has it grown? 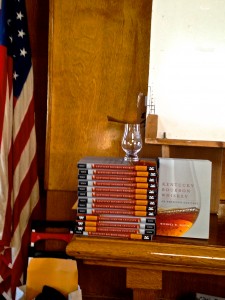 Michael Veach: The bourbon industry has grown in the last 10 years at a rate no one expected and it has led to supply shortages. You have to be a bit of an oracle to sell bourbon, because you need to make the product many years in advance of the sell date. This led to shortages because no one was thinking the consumer demand would grow this quickly. However, the production level is not as high as it was in the 1960s. The industry can produce more and will to keep up with the demand.

Good Food on Every Table: How much of the overall bourbon market is now comprised of craft and regional distilleries?

Michael Veach: About 5 percent of bourbon is coming from sources other than the large distilleries in Kentucky that have been making bourbon all along. The craft distilleries (however you want to define them) are still a very small part of the market. I suspect it will be many years before that will change to even a small degree.

Good Food on Every Table: Is there any way to characterize what impact the newer, smaller producers have had on consumer preferences? For instance, are they driving innovation in a way that affects the actions and product decisions of the larger traditional producers? Are they making bourbon a more accessible concept to drinkers than when almost all of it was produced by the handful of big houses in Kentucky?

Good Food on Every Table: The Good Food movement on which our website is focused is driven by the growing consumer demand for more locally produced food. Is that also a reason for the rising number of craft producers scattered across the nation?

Michael Veach: I am not sure if local-produced is a driving factor as to why, but it has had an effect on what. The craft distillers are using local grown grains when possible to get first tax breaks and secondly to set their product apart from other bourbons.

Good Food on Every Table: There probably was more skepticism about craft bourbon than white spirits, in great part because young distilleries relied on speed-aging processes to get a brown liquor to market. As a growing number of craftsters have now been around longer and thus can produce a longer-aged product, is the quality of craft bourbon literally maturing?

Michael Veach: This depends upon the distiller. Some are happy to put it in small barrels and get it out to the market quickly and keep the investment as a short-ranged investment, whereas others have been thinking long-range all along and placing bourbon in 53-gallon barrels for aging. The quality of good bourbon depends upon the larger barrels and long aging. They had small barrels in the 19th century and if it made good Bourbon, we would have still had them today.

Good Food on Every Table: Are there particular craft bourbons you believe are standouts that bourbon lovers simply should not miss?

Michael Veach:  I really like the bourbons coming from Wyoming Whiskey [based in Kirby, Wyoming]. The Finger Lakes Distillery [in Burdett, New York] also makes great traditional and wheated bourbons. Tom’s Foolery distillery [in Chagrin Falls, Ohio] has some great bourbon aging in full-sized barrels and are planning to release it this fall. They eventually want to release it as a bonded Bourbon.

If you are in the Chicago area and would like to get a taste of Michael Veach’s bourbon expertise, he is scheduled to be presenting at the following venues on Sunday, Sept. 28: