The proverb says that necessity is the mother of invention. Yet for the team who founded ready to BRANDS, it was impending motherhood — and a rare and debilitating condition associated with it — that necessitated their invention of ready to EASE, a nausea relief product that can be taken as an ice pop or liquid shot.

The power of Mark Muller’s creative response to a critical situation — and the simple appeal of his organic, all-natural product — helped ready to BRANDS win a highly competitive Pitch Slam, beating out eight other outstanding business startups at FamilyFarmed’s Good Food Financing & Innovation Conference in June.

The win netted ready to BRANDS a prize package valued at $15,000, with a cash prize plus in-kind consulting and other business services from Pitch Slam sponsors Smoketown Strategy & Innovation, Creative Alignments, NewPoint Marketing, and KemperLesnik. 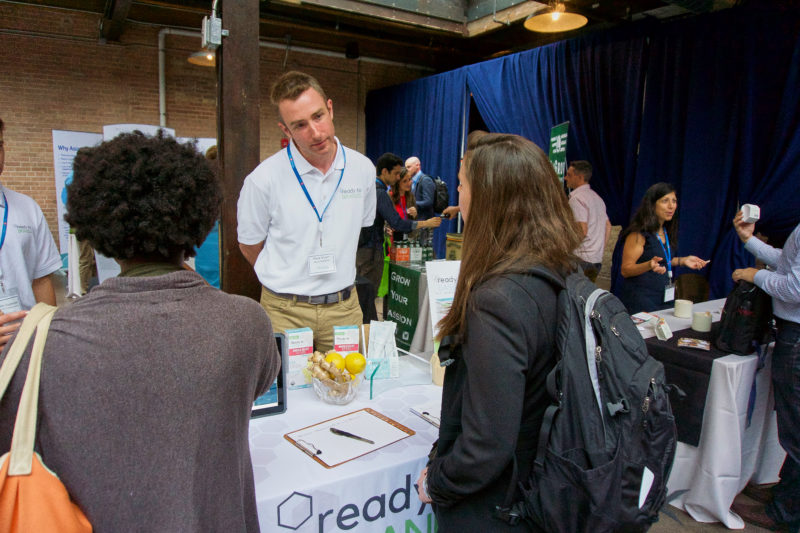 It was another step forward for ready to BRANDS, which in April was one of eight competitively selected businesses that graduated in the fourth cohort of FamilyFarmed’s Good Food Accelerator — which at its founding in 2014 was the first such entrepreneur development program focused on locally and sustainable produced food.

One of the biggest benefits of the Accelerator is its expansive network of industry leaders acting as mentors. And Mark Muller credits mentor Mike Schopin of Zenfinity Capital LLC with steering the startup company in bold new direction, including a full rebranding and a major broadening of the market for its initial anti-nausea product, which originally was targeted narrowly to pregnant women with morning sickness.

The application period for the Accelerator’s fifth cohort launched on Aug. 1 (with a Sept. 13 deadline), and the selected companies will begin the six-month intensive curriculum in November. Muller said there are many reasons why entrepreneurs with promising early-stage businesses should consider the program.

Muller describes the benefits of participating in the Accelerator program in this video shot at the Good Food Financing & Innovation Conference, shortly after he won the Pitch Slam. (Video: Luiz Magaña/FamilyFarmed)

“Connections across the entire supply chain. Connections with distributors like UNFI, we’re in the process of on-boarding for their ‘Next’ program right now. Things like that really do accelerate your growth. The right brokers and attorneys, pretty much anyone and everyone you would need to be in touch with to do this right, the Accelerator has made these connections,” Muller said.

While the team members at ready to BRANDS are enjoying the first flush of success for their company, it evolved from a very scary juncture of the Mullers’ lives.

Mark Muller was working in finance in Melbourne, Australia when his wife Meagan, then pregnant, developed a severe case of Hyperemesis Gravidarum, which Muller describes as “100x morning sickness.” He said extreme nausea, vomiting and dehydration resulted in Meagan losing about 20 percent of her body weight within the first month of this condition setting in.

“Things just kept getting worse,” he said. “So what started out as the search for relief escalated to something that was an absolute necessity.”

The drive to come up with a solution was prompted by a realization that the available commercial anti-nausea products “were either ineffective, or loaded with different chemicals that you certainly wouldn’t want to put in your body when you’re pregnant.” Muller said that after experimenting with “hundreds of iterations,” they “arrived at something that really took the edge off and helped get her through this very difficult time.”

With ready to EASE, the company lets nature do the heavy lifting. In fact, the product is loaded with all-organic ingredients, some of them widely regarded as superfoods: organic coconut water, sea salt, ginger, B6 and B vitamins and wildflower honey. The positive impact on Meagan’s health got the couple thinking about how they could share their new-found knowledge. 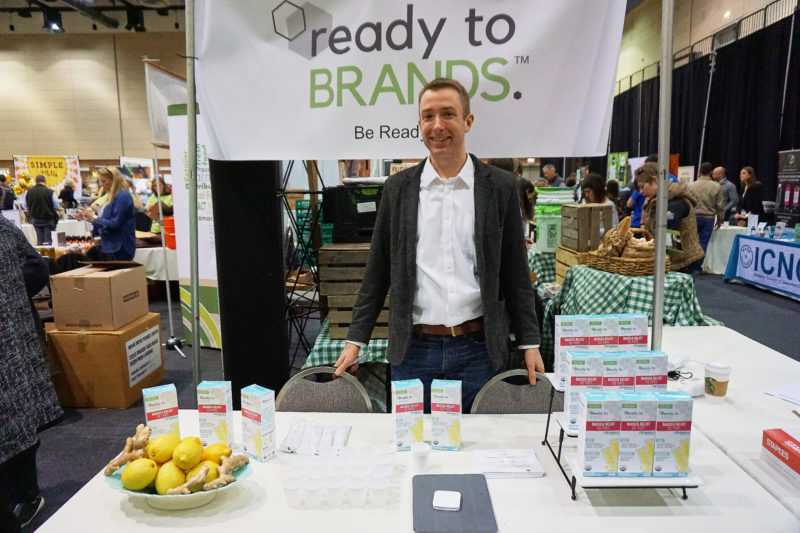 Mark Muller of ready to BRANDS exhibiting at FamilyFarmed’s Good Food EXPO on March 23, 2018 in Chicago. The company’s initial product, ready to EASE, made its major public debut at the event. Photo: Bob Benenson/FamilyFarmed

“We never really said let’s make this a business,” Muller said. “I knew we had something that gave us significant relief. We also came to realize there were so many people out there suffering from many different types of nausea. It became apparent we needed to do something about it.”

Mark ultimately decided to make it a business after returning to the Chicago area (he grew up in Evanston), and things really took off after he and his company were accepted to participate in FamilyFarmed’s Good Food Accelerator, an entrepreneur development program that provides a six-month curriculum, mentorship, networking opportunities and connections to investors.

In this video clip, Muller describes the decision to expand the target market from those suffering from morning sickness to more general nausea relief. (Video: Luiz Magaña/FamilyFarmed)

When their Accelerator term began in November 2017, their company was pre-production. Within a few short months, they re-branded to ready to BRANDS, completely redesigned their packaging, went into production, and unveiled the product at FamilyFarmed’s 14th annual Good Food EXPO, held March 23-24, 2018 at Chicago’s UIC Forum.

“We really knew right away that we were on the right track in the broader positioning, because we had so many people come to us with other use cases for why they see a need for our product,” Muller said. “We sold many to people experiencing migraine nausea. That was something we weren’t as familiar with, but it meets a very acute need. Also, people who had the unfortunate situation of having relatives heading into chemo, or had undergone chemo and of course nausea related to that.”

The company is now starting to partner with hospitals in the Chicagoland area and is in the early stages of building a foundation that will contribute a percentage of all profits to medical research, as part of its larger vision to make a meaningful impact in the world and to further help those who need it most.

Now, thanks to the Pitch Slam victory, Muller knows that his product met the approval of a panel of seasoned judges and was introduced to an elite audience of investors and industry leaders at the Good Food Financing & Innovation Conference. And he will benefit from those in-kind prizes, which include:

What’s next? Muller describes the company’s efforts at new product development while staying focused on building sales and success for ready to EASE. (Video: Luiz Magaña/FamilyFarmed)

ready to BRANDS is one of many Good Food Accelerator graduates who have experienced growth and progress as a result of their participation. If you are an entrepreneur who would benefit from this entrepreneur development intensive, do not miss the opportunity to apply by the Sept. 13 deadline.