Paul Kahan is executive chef and partner in Chicago’s One Off Hospitality Group, which manages the empire of acclaimed restaurants — Blackbird, Avec, The Publican, Big Star, Nico Osteria and others — that he has launched over the past 15 years.  Yet he is not too busy to pursue a favorite cause: teaching food literacy and healthier eating habits to Chicago schoolchildren.

Kahan is one of the chefs who founded a non-profit organization called Pilot Light. The program — which this year expanded from one Chicago public school to six —works with teachers of children from kindergarten through 8th grade to develop curriculums that advance their knowledge about healthy eating and how food relates to other subjects about which they are learning.

And that is why Kahan was at Chicago’s Green City Market Saturday morning (Nov. 15), assisting 12-year-old Tess Boghossian as she prepared her “Lincoln’s Soup.” 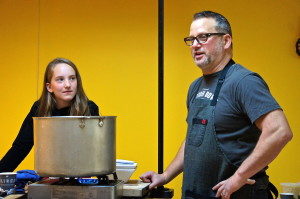 The recipe made her the Illinois winner of the nationally staged Healthy Lunchtime Challenge for children, and sent her to Washington, D.C., in July for a luncheon at the White House. There she met first lady Michelle Obama, who created and sponsors the annual contest and, Tess said, got a high-five from President Barack Obama.

Kahan said Pilot Light, “is the reason I chomped at the chance to do this demo with Tess.”

Tess, who attends school in the northwest Chicago suburb of Palatine, explained that she chose the recipe because she is a “history buff,” and because Lincoln — the first of Obama’s White House predecessors from Illinois — is her favorite president. She said she adapted the historic recipe for the chicken and vegetable soup to make it healthier, replacing “a bunch of butter” with olive oil, adding the now-popular ancient grain quinoa… and tossing in diced parsnip with the carrots, onions, green beans and asparagus because it is her favorite vegetable.

The result, shared with attendees, was a tasty, light soup that could easily be a staple in any household. Kahan supplemented the soup with samples of a grilled open-faced “tartine” made of rustic bread baked in one of his restaurant kitchens and topped with a butternut squash spread, quick-marinated kale, pickled fennel and a soft cheese. All in all, a pretty sophisticated mini-meal for a farmers market demonstration headed by a tween.

(Tess’ recipe, as well as those of the other state contest winners, is included in the 2014 Healthy Lunchtime Challenge Cookbook, which was published by the food website Epicurious and can be downloaded for free by clicking here.) 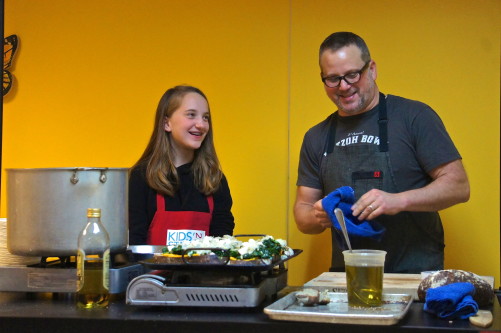 There is a connection between the contest in which Tess was a winner and the origins of Pilot Light, the food education program in which Kahan is a leader. Both emerged from the high priority Michelle Obama has given to child nutrition and health since she became first lady almost six years ago.

Kahan explained that he and other local chefs went to Washington for the rollout of Mrs. Obama’s “Let’s Move” program that promotes physical fitness, especially among children. (Sam Kass, the native Chicago chef who is executive director of Let’s Move and the White House senior advisor on nutrition policy, once worked for Kahan at his restaurant Avec.) Kahan said he and his peers came away inspired, but puzzling over what they could do that would have a lasting positive impact on local children and their understanding of food and health.

They ultimately developed Pilot Light, launched five years ago, that integrates food into the students’ overall curriculum — discussing inner-city “food deserts” in the context of lessons about the civil rights movement, for instance. It also provides hands-on tasting programs that seek to educate and elevate the children’s interest in the variety of flavors, textures and other qualities of fresh, healthy food, and a cafeteria luncheon for the kids prepared by some of the city’s culinary superstars.

Kahan explained at the Green City Market event how this concept works in practice. “If you go in front of some 2nd graders and you put a salad bar in the school, not a single kid is going to eat anything off the salad bar,” Kahan said. “But if you go into the classroom and say, ‘Here are 20 different kinds of heirloom tomato, green, red, candy-striped, all these different colors,’ and you put a little olive oil and salt on them, and you march the kids down the line and they each get to taste a different color tomato and see what the differences are, some are very rich, some are acidic, some are non-acidic, just an incredible array of flavors.”

He continued, “They get really excited about what they’re seeing and tasting and touching. And you turn those kids loose on a salad bar in a cafeteria after an experience like that, and it works.”

Kahan also related about a classroom of 60 3rd graders in which most lined up for seconds of a preparation of freshly cured salmon and broccoli stem slaw. “We talked about the migration of the salmon, about the life of salmon, we talked about the salmon fisheries and the state of those fisheries. Kids learn and it stimulates their brain and they get excited and they want to try this stuff. It’s not bad anymore. It’s good,” Kahan said.

When asked about the degree of food literacy among the students when they first encounter the Pilot Light lessons, Kahan said, “We have inner-city kids and we have rich kids, we have kids from the neighborhood. So their understanding of food going in was vastly different.”

He added, “Now, we have kids saying, believe it or not, ‘We don’t want to go to McDonald’s.’ It’s not our intention to take kids away from McDonald’s. We’re just trying to educate them.”

Kahan noted in conversation that Pilot Light is holding a 2nd annual “Feed Your Mind” fundraising gala on the evening of Friday, Dec. 5 at the Chicago Cultural Center. More information about the event can be found here.

Bob Benenson is communications specialist for FamilyFarmed, a non-profit organization that works to advance the Good Food movement. Before moving to Chicago in 2011 and transitioning to Good Food advocacy, Benenson was a political analyst for Congressional Quarterly in Washington, D.C., for 30 years.