I pack iron. Say hello to my little friends. 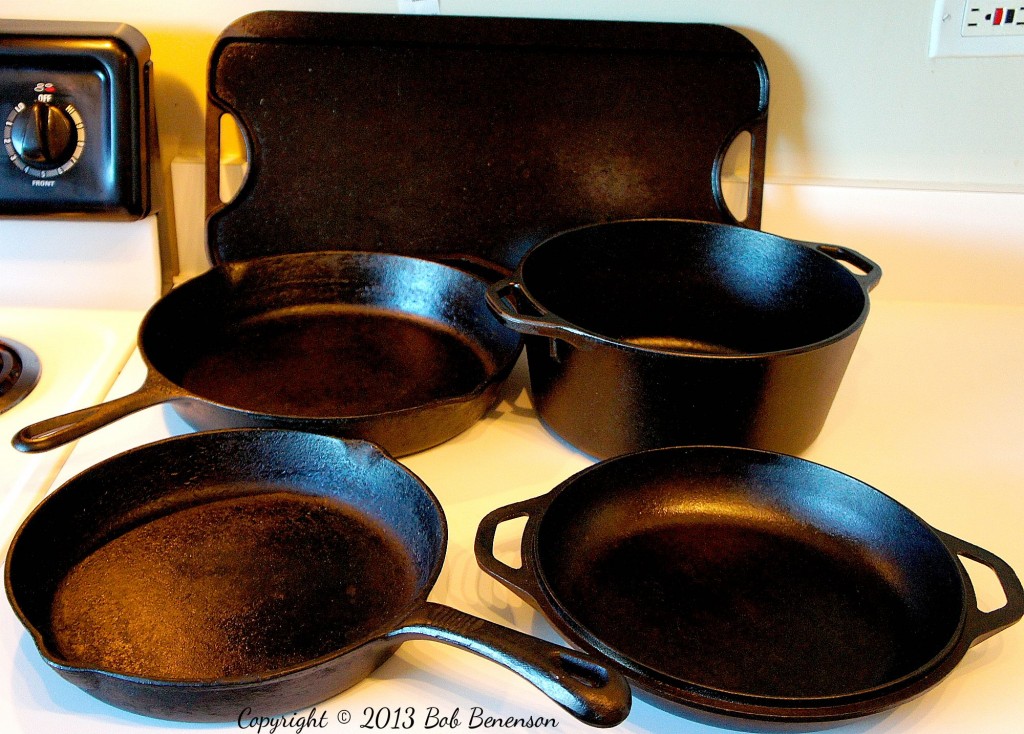 And these days, I do almost all of my cooking with a mighty arsenal of cast-iron cookware. Since one of the major messages of Good Food on Every Table is how easy it is to make delicious meals at home using sustainably produced ingredients, it is likely that my alter ego — Cast Iron Man — will be popping up on the site with a fair amount of frequency.

Like many people who become obsessed with meal preparation as adults, I initially picked up my food jones at a very tender age. My stay-at-home mother was a good and prolific cook. And — you can confess things like this when you’re well into middle age — I was a bit of a mama’s boy, who tagged along to the grocery store and watched my mom produce vast quantities of food in a windowless apartment kitchen that was about the size of a small walk-in closet.

Because that kitchen had barely enough counter space for one, I didn’t start cooking for myself until my one year living off-campus at Michigan State University, and only got serious about it when I moved to Washington, D.C., and my own place in 1981. By the time I got married, and over the 28+ years since, my wife Barb has been happy to allow me to pursue this most practical of hobbies.

But my affinity for cast iron cookware only developed over the past few years. The pieces were big and heavy, which made storage an issue in the tiny apartment kitchens to which I was long consigned. It needed to be kept “seasoned” with frequent coatings of vegetable oil to keep food from sticking to it and prevent rust. And because soap and detergent can ruin that seasoning — NEVER put cast-iron cookware in a dishwasher! — clean-up requires a little extra elbow grease.

But I also came to admire the qualities that make many people swear by these sturdy black pots and pans. Cast iron is an amazing heat conductor, which makes it perfect for the “keep it simple” cooking I prefer: well-seasoned meat and vegetables, seared or roasted or sautéed to brown and seal in juices, then finished at a lower temperature.

There’s a good reason why cast iron is most associated with the term “indoor grilling.” Nothing produces cookout results on the stovetop or in the oven like this material.

But the tipping point for my complete conversion to cast iron kitchen curator was our move a couple of years ago to Chicago. Our apartment has a kitchen that both is well-ventilated enough that high temperature stovetop cooking won’t automatically set off the smoke alarm, and is considerably larger than what I previously had to work with. Not a humongous chef’s kitchen with a center island and Viking stove, mind you, but it is designed with a unusually sufficient storage space, and you can turn clear around without smacking your nose into the opposite wall.

I’d already amassed a small a cast-iron collection made up of a 10-inch skillet, a grill pan of the same size, and a 5-inch skillet. So when Barb asked me what I wanted for the holidays in 2011, I decided to take the opportunity to expand my stockpile.

I put two items on my wish list: a two-burner griddle that is a grill on one side and flat on the other, and a deep 12-inch skillet. Realistically, I hoped for one of these pieces. But Barb went to The Chopping Block, a local kitchen store that also conducts cooking classes and bought both. She then lugged this 30-pound load of old-school heavy metal several blocks to the car.

I have taken that as affirmation both that she loves me, and also enjoys my cooking.

Hardly a day goes by now when I do not use one and often more of these pieces, though I have to admit that I’ve called the two-sided griddle my Best Christmas Gift Ever. The grill side has turned out mass quantities of burgers (beef and turkey), sausages, chicken breasts, steaks and pork chops. The flat side can do everything the other side can, sans the grill stripes, and also is great for eggs and pancakes. And perhaps best of all, if you’re a carnivore, bacon cooks at its full length instead of getting crammed into a pan in which the ends can curl up.

Now, to be honest, I’m in minorities here on a couple of counts.

It’s true that the cult of cast iron has been growing pretty rapidly in recent years. Statistics posted on the Cookware Manufacturers Association website show that $114 million was spent nationally on cast-iron cookware and its cousin, enamel-coated steel, in 2012. That was more than triple the $35 million total in 2003 (which was just 4 percent of all cookware sales). Yet even with all the ensuing growth, cast-iron and enameled cookware still amount to barely more than 10 percent of the total market.

It also is true that guys who own the home kitchen are still greatly outnumbered by those who don’t. Okay, traditional gender roles have weakened, there are numerous male celebrity chefs, and the idea of cooking as a competitive sport, popularized by reality shows such as Top Chef and Iron Chef, may be raising guys’ interest in the culinary arts. But husbands who do almost all of the cooking at home are still mainly an exception to the rule.

I have a theory, however, that cast-iron cookware can change that. While it is possible that the heirloom pan you have sitting in your cupboard might have been passed down from your great-grandmama, you’ve got to admit that, as far as cookware goes, cast iron is pretty macho.

It’s the only kind of cookware that is so heavy that you could include it in your power-lifting routine. There’s even a hint of danger: Almost all cast-iron equipment has uninsulated handles that command use of industrial-strength hot pads to keep from accidentally branding yourself for life.

It is also cowboy cookware, the stuff that came along for the ride in saddle bags and clanged from hooks in the chuck wagon as covered caravans of pioneers worked their way west. It is at home on the Range as it is, well, on the range.

So, men, will taking up cooking with cast iron impress the womenfolk in your home? You bet it will, pilgrims.