July is Protein Month at SPINS marketing studio.And whether we’re sampling cricket snacks and buffalo bars, visiting humane ranches in the Southwest, eating reindeer dogs in Alaska (sorry, Santa), or figuring out nut cheese, we quietly negotiate our relationship with the building blocks of life every time we eat.

Protein is the only macronutrient in our diets that has dodged public scorn, unlike fat and carbs. It reigns in the American consciousness as the nutrient that will sculpt muscles, satiate hunger, and evolve minds. 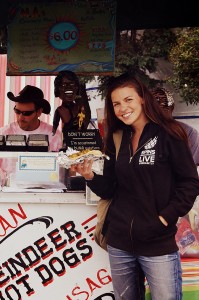 Kora Lazarski is a business developer for SPINS, a Chicago-based firm that does consulting and analysis in the natural, organic, and specialty products industry.

This is plainly obvious, as hardly a category of food product remains in the glowing aisles of retail that hasn’t touted its protein content. But with recent unprecedented global acquisitions of conventional meat processors to feed increased protein demand, it’s led me to re-examine my own feelings about protein.

Mahatma Gandhi said, “The greatness of a nation and its moral progress can be judged by the way its animals are treated.” What he suggests is that peace and morality are achieved when the weakest members of any community are treated with magnanimity.

Books by vegan ultra-marathoner Scott Jurek, author of Eat and Run, and Christopher McDougall, author of Born to Run, were the first to crack the foundation of my heavy Polish diet of hams, sausage, schmaltz and cheese. To underscore how heavy: My dad convinced our neighbor to dig up his whole yard and build a cold smoker for all the meat curing in our basement, and we paid said neighbors’ “rent” in pounds of flesh.

Yet athletic performance evidence poured in that said excessive protein was at the least unnecessary, and at the worst counteractive to strength and stamina. If ancient Aztec runners were able to run impossible distances on primarily chia and corn, as both authors posit, why were we, in our mostly sedentary lives, overindulging industrial feeding operations (IFOPs) by billions of pounds of flesh?

I tested the authors’ hypotheses and went vegan for a year despite my family’s and Paleo boyfriend’s pouting. Midway into the diet, I began training for a marathon and concern over my diet rose. To silence my loving critics, I scheduled comprehensive blood work at Northwestern.

The results? Through the roof levels of every good nutrient and trace LDL numbers. My physician explained that many vegans and vegetarians have higher protein-associated nutrients because they generally compensate by eating more balanced and diverse diets.

But most surprising to me, she stated almost as an aside that many females report higher cravings for meat during pregnancy and menstruation, presumably from increased iron need. It implied to me that meat is not necessarily just a learned taste. If we hang at the top of the food chain with the other natural predators, the human inflection point must lie in our ability to choose what kind of predator we want to be.

Being a vegan lasted an entire two weeks in South America, where I grew bored of fruit and rice for lack of other options. I caved and bought a plain grilled chicken, sans seasoning, and truly tasted real chicken for the first time in my 26 years. It had long legs, a small torso, and lived a happy chicken life in a big backyard.

Therefore, it didn’t surprise me to learn that McDonald’s was pulling out of Bolivia because their sales revenue was consistently in the red, and KFC thrived only because they sourced from small local farmers. Native friends told me McDonald’s processed meat tasted wretched and they just passed. They had peacefully dismantled the world’s largest fast food chain and my mind was so appreciatively blown.

The definition of progress is “forward or onward movement toward a destination.” But what if that destination was back home all along, where love trumped industry, as in Bolivia’s case? Or the Aztecs’ case? Or in Poland’s case, which the New York Times exalted as the most progressive EU country by measures of animal sustainability?

I’ll never forgot how hard my family laughed at the article’s examples, lauding how back-country folks let their animals freely range in and out of their own living rooms. “Viva Polska!” we joked, we were so backwards we were forward again!

So if America’s destination is to return home to better days, SPINS can now measure that progress with extensive Protein & Dairy attributes like Free-Range and Grass-Fed. And one look at the sales figures of items bearing these claims reveals that consumers are embracing better taste and better treatment of our “lower-order” protein friends.

We want the bricks of our bodies and society’s walls built with strength and stamina. And though conventional meat processors are putting up quite a fight, I’m reassured by another Gandhi quote. “First they ignore you, then they laugh at you, then they fight you, then you win.”