Millions of Americans want to be able to obtain more locally and sustainably produced food. So the Good Food movement needs more thriving farm and food businesses. But many farmers and entrepreneurs require help to develop the business skills and access to resources that allow them to successfully launch or expand profitable businesses.

That is the thinking behind the Good Food Business Accelerator (GFBA), the biggest initiative to date by the non-profit organization FamilyFarmed.org, which works to promote the expansion of the Good Food movement (and publishes the Good Food on Every Table website).

The GFBA is modeled after other business accelerators that aim to help start-ups and other small businesses scale up by providing instruction, mentoring and assistance in building networks of financiers, investors and potential future customers. It is the next step in FamilyFarmed’s efforts to abet the growth of Good Food businesses, which also includes its 10-year-old Good Food Festival and Conference held every March in Chicago. 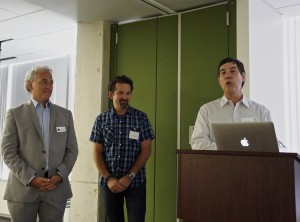 The site was hardly a coincidence. FamilyFarmed has a long working relationship with Whole Foods Market, the nation’s leading supermarket chain selling organic and natural products. So it seemed a natural progression when FamilyFarmed succeeded in lining up Whole Foods as a lead partner for the Accelerator.

Michael Bashaw,  the Midwest regional president for Whole Foods Market, said helping smaller producers sell their products “is deep within our DNA.” He said, “Whole Foods from the very beginning has been a sponsor and promoter of responsibly farmed food.”

Bobby Turner, Whole Foods Midwest vice president for purchasing, extended upon Bashaw’s remarks. He pointed to a couple of vendors whose products are on the shelves of Whole Foods supermarkets and who participated in the event by providing samples of their products to attendees: FarmedHere, which grows salad greens, herbs and other organic produce at an innovative indoor vertical farm in the Chicago suburb of Bedford Park, and Iowa’s Tiny but Mighty Popcorn.

“That story has been repeated so many times,” Turner said. “Small businesses that maybe started in a single store and grew and grew and grew. The Accelerator will take this power and expand it significantly.”

Other vendors who participated included Manna Organics, which makes vegan, organic food products in Lisle, Ill. (and whose founder/CEO, Markus Schramm, serves on the FamilyFarmed.org board of directors); Chris’ Awesome Guacamole of Chicago; Beanfields chips; CH Distillery, a craft spirits producers that recently opened in Chicago; and Forbidden Root, a new craft brewery in Chicago that is using botanicals and other unusual ingredients in its recipes. A photo gallery from the event is below.

Referring to the Accelerator event, Turner added, “We’re hoping that tonight is another step in that continuing story. We’re looking for those individuals who are interested, who have the passion, we want to support them, plant that seed, let it grow. The best things about American business is what this program is all about.”

Slama noted during his remarks that the Good Food Business Accelerator has benefited from the support of The Searle Funds at the Chicago Community Trust, which in partnership with Kinship Foundation recently launched a project called Food:Land:Opportunity — Localizing the Chicago Foodshed. The GFBA was the first project funded under the initiative.

The organizers for the Accelerator program are actively seeking potential investors, mentors and advisers, and others interested in participating in the project. If you are or want to learn more about the GFBA, please contact Conor@familyfarmed.org.

Slama said that while there are around 2,000 accelerators functioning in the United States across the business spectrum, only 10 of them are focused on food. The Good Food Business Accelerator will be the first to focus its efforts on building bigger and better local and regional supply chains in the local and sustainable food sectors, so the rapidly rising consumer demands for Good Food can be met.

“We will support the development of farms, food hubs, restaurants, food artisans, and other packaged food companies,” he said. “It will serve a full array of food entrepreneurs.”

To underscore this aspect of the Accelerator’s goals, Slama noted that UNFI (United Natural Foods Inc.), the leading independent national distributor of natural, organic and specialty foods and related products, is also a lead funder on the project, along with Whole Foods Market.

One of the key benefits that Accelerator Fellows will enjoy is enhanced access to the burgeoning network of funders in the Chicago area alone who are supporting businesses in the Good Food sector. This group includes The Searle Funds at the Chicago Community Trust, SLoFIG (Sustainable Local Food Investment Group), Angel Food Network, 2X Consumer Products Growth Partners, Whole Foods Market’s Local Producer Loan Program, Fresh Taste, 1st Farm Credit Services, Acción, and Chicago Community Loan Fund, among others, as well as government agencies such as the U.S. Department of Agriculture and Small Business Administration.

The first Accelerator classes will be made up of eight Fellows and be headquartered at 1871, Chicago’s center for entrepreneurial innovation.

Applications for the initial class will be released in Mid September. An intensive six-month training program will begin in November. The Fellows in the Chicago program will pitch their business plans at FamilyFarmed’s Good Food Financing and Innovation Conference in March.

The program’s ultimate goal is to produce new clusters of Good Food farms and businesses that will build stronger local and regional supply chains, share their knowledge with other rising entrepreneurs, and function as role models for the possibilities of this movement to change how America eats for the better.

As Turner of Whole Foods said, “I really feel this Accelerator is the right thing for Chicago and the Midwest, to help these companies get out there and do what they’re proud about and they’re passionate about. These people need just a little help and support and investment of time. This addition is really going to help grow the local food movement.”