Rob Levitt of The Butcher & Larder did not begin his culinary career with the aim to become a renowned meat cutter. He and his wife Allie met while students at the Culinary Institute of America and initially worked preparing delicious food in restaurants, first in Manhattan and then in Chicago. But Rob developed an expertise in charcuterie that ultimately piqued his interest in the art of butchery. Four years ago, he and Allie opened the Butcher & Larder at 1026 N. Milwaukee Ave. in the slightly off-the-beaten-path Noble Square neighborhood, and quickly developed it into one of the city’s favored spots among meat lovers.

Now the Levitts are preparing for their next big step, moving The Butcher & Larder into a much larger space in a retail store that Local Foods — a distributor specializing in local and sustainably produced food — is constructing in the Bucktown neighborhood a bit farther uptown. In this piece, originally published on The Butcher & Larder’s blog, Rob Levitt describes his vision for the new location.

[Levitt will present on workshop on charcuterie-making at FamilyFarmed‘s Good Food Festival on Saturday, March 21, and Local Foods is a presenter of the Localicious tasting event on the evening of Friday, March 20. For more information about the three-day Good Food Festival & Conference, or to buy tickets, please visit the event website.]

Four years ago, I had no idea what it meant to be a butcher. It was never my intention to cut meat for a living, but I found myself holding the keys to a storefront on Milwaukee Avenue, about to open “Chicago’s first sustainable, whole-animal butcher shop.” 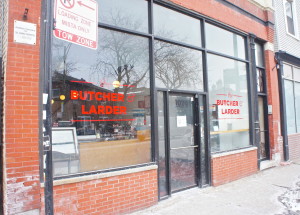 What I did know was that there were people my age all over the country opening shops like this. I knew that the work was important — not only for the sake of reviving a dwindling trade, but for the purpose of giving people a better option than what was available at the supermarket.

I knew that I wanted to offer my community some transparency along with a great story, a recipe or two, and the satisfaction of knowing where their hard-earned dollar was going. Along with our customers, we learned that every part is delicious if it comes from a good animal — an animal that was raised well, fed well and carefully cut.

We became part of our neighbors’ celebrations and holidays. We saw babies come into the world and sent new parents home with quarts of soup and chili for a quick, delicious, nourishing meal. We saw couples get married and sent newlyweds home with a tub of rillettes and a chicken to roast. I’ve had cooks into the shop to stage and then go on to open important, like-minded shops and restaurants in other parts of the country. I’ve been humbled by requests from some of this city’s best chefs to produce a custom sausage or to teach their staff how to break down an animal.

I have seen staff come and go, but go with a different understanding of why we do what we do for a living, and with a new appreciation for the raw materials we as cooks are responsible for. I have seen my current staff grow beyond what my little storefront can produce.

The seams of 1026 Milwaukee are bursting with talent, with possibilities. So when Dave Rand strolled in to tell me about his new company, Local Foods, the wheels started turning.

Local Foods is important. It will prove how strong Chicago’s food community is. There is so much talent at every level of this operation — so much pride, so much confidence.

To all the people who have made The Butcher & Larder great, Local Foods gives us a new opportunity to be more than my little store will allow. It gives talented, hard working, skilled craftsmen — individuals who bring sentiment and thoughtfulness to everything they do — the ability to extend their reach and make not just a living, but a career.

If I have learned anything over the years it is that evolution is crucial to a successful business. Teaming up with Dave, Ryan, Andrew and their Local Foods team is an unbelievable opportunity for The Butcher & Larder to evolve, to move forward in an exciting direction that will elevate and expand everything we’ve worked so hard to bring to our community.

It was easy to imagine the rows of country hams hanging in the window at the new space in Bucktown. Looking around at what will be my curing room, I could almost smell the mustiness, mold and funk of the cured meats I’ve been waiting my whole career to produce. Standing in the doorway where my meat cooler — a room almost the size of my entire butcher shop now — passes into my cold cutting room, I could practically see the sides of beef sliding in on the rail. 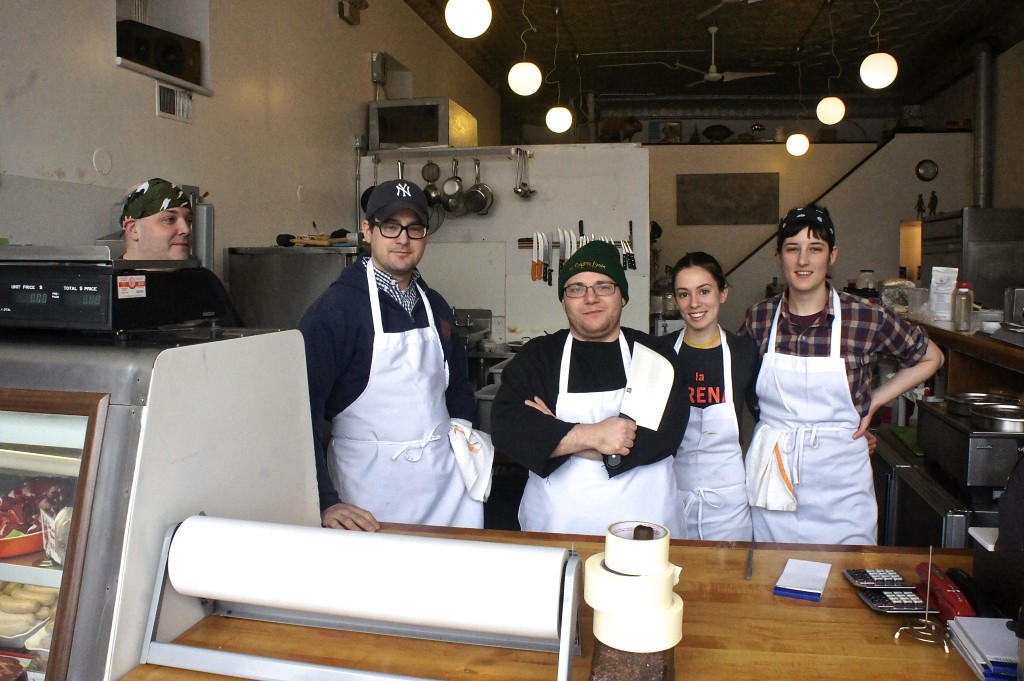 From that rail, I looked through a window into my retail butcher shop and I could envision racks and racks of that most precious commodity, B&L Bacon, swaying on hangers while countless lugs of pork bellies bathe in cure waiting for their turn in the smoker. I could hear the cryovac sealing a chunk of pastrami while the band saw chined a beef rib, and Jimmy stepped away from his spot at the cutting table to make sure the new guy was doing it right.

Walking through what will soon be my new butcher shop — part of an amazing market full of vegetables, cheeses and preserves — I could see the display of ham, pâté and cured sausages stacked and hung within reach of the beautiful, red manual slicer where platters of charcuterie will be arranged and served.

In the kitchen, I could smell soups and stews bubbling away while sandwiches were being assembled, and I saw a day when the staff would know that at precisely 11 a.m. they’d make my usual lunch: country ham and a ridiculous amount of butter on a baguette with a cup of hot, black coffee.

Walking through Local Foods, though barely half-built, I could see all this because it is happening. It is real.