Many people who serve as aides to farm state congressmen tend to be sympathetic toward the big agribusiness and food marketing companies that wield clout to influence federal agriculture policy. Bob Martin, now a senior policy adviser at Johns Hopkins University’s Center for a Livable Future in Baltimore, Md., went in the opposite direction. 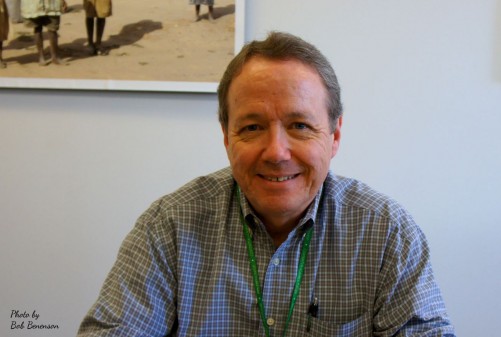 Martin had been working  as communications director for the Kansas Farmers Union when he went to work in a similar capacity with Democratic Rep. Dan Glickman, who represented Wichita and its environs in the House from 1977 to 1995 then segued to six years as secretary of Agriculture under President Bill Clinton. He then served as a top aide to Democratic senators Tom Daschle and then Tim Johnson of South Dakota.

Working in these roles, Martin became greatly concerned as he learned more about the “conventional agriculture” that had come to dominate the U.S. food production system — including the raising of livestock in unhealthy, crowded conditions that required the routine application of antibiotics to keep the animals healthy.

That was a primary reason that Martin left government in 2005 for the position of executive director of the Pew Commission on Industrial Farm Animal Production in Washington, D.C. The Pew Commission in 2008 released a report, Putting Meat on the Table: Industrial Farm Animal Production in America, that helped raise the profile of issues related to the use of concentrated animal feeding operations and their impact on human health — including the rising incidence of antibiotic-resistant bacteria — as well as animal welfare and the environment.

The report was done in concert with the Johns Hopkins University Bloomberg School of Public Health, which houses the Center for a Livable Future. Martin shifted over in May 2012 to his role at the center, which works to promote sustainability in food systems in the United States and around the world.

The following are excerpts from an interview with Martin conducted by Good Food on Every Table at his office in Baltimore. In his first answer, Martin cites the efforts on promoting Good Food in Chicago Public Schools by Jim Slama, president of FamilyFarmed.org and co-founder of this website.

Q: As the Good Food movement gains momentum, there seems to be a greater emphasis on building regional food systems. This is certainly going on in Chicago, where I live.

Martin: The Great Lakes region is going to be one of the leaders in regional food systems. You’ve got people like Jim, who’s been providing fresh apples to the Chicago city school system from Michigan, Wisconsin for years. The school system there is interested in more locally sourced foods. When I was at Pew, Kerri McClimen [a leader in the national effort to limit the use of antibiotics in raising livestock] and I started the dialogue between Whole Foods and the Chicago city school system to provide antibiotic-free chicken one meal a month. There’s a lot of interest in the Northeast in these areas too…

The real driving forces, it seems to me, given the dysfunction on Capitol Hill, on improving food and food system work really are mayors and governors.

Q: You have been very involved with agriculture for a number of years. How did this transition to “conventional agriculture” happen without most Americans recognizing it? As the Pew report stated, most people still have this romantic image of farming, yeoman small farmers growing their food, and cowboys out on the prairie rounding up the grass-fed cattle. But it hasn’t been that way for a long time.

Martin: And the big companies perpetuate that image in the media and in advertising… Most people don’t know where their food comes from and their food animals and how they’re produced. It really kind of started to change in the late ‘40s and early 1950s… It started really with the poultry industry. It’s interesting that Perdue and Tyson were processors, and they did kind of a vertical integration downward so they can control material, like any factory wants to control their input costs. To control what they were getting, get uniform size, uniform quantity, they started integrating downward. So what’s happened in the poultry industry today is it’s about 99 percent contract production. Very little independent production on the open cash market…

Then it started to bleed into the swine industry, a little bit later. It wasn’t until the 80s that this started happening in the swine industry. In 1995, ‘96, was kind of the turning point, when some of the large swine companies, like Smithfield, drove a lot of the small independent producers out of the business. They drove the price so low that it bankrupted hundreds of family farmers…

A lot of swine producers have been able to develop niche marketing. Niman Ranch. There’s one on the east coast, Applegate Farms. Steve McDonnell’s a very interesting guy, the president/CEO of Applegate. He’ll say he’s the only head of a meat company that will tell you to eat less meat. But eat better meal, eat higher quality meat, just eat less of it. Bill Niman is another, he’s a leading in cattle and sustainable pork production. You look at restaurants like Chipotle, Steve Ells wants to have one aspect that’s sustainable in poultry production and swine production, meat raised without antibiotics, and he can’t get enough…

Q: The big agribusiness and food companies are digging in their heels pretty good. Part of the problem I perceive is that there really are millions of people who are participating in the Good Food movement in many ways. I shop at Whole Foods, or I go to farmers markets, or I grow my own food in my backyard, I participate in a community garden, I only buy antibiotic-free meat, or whatever it is. But unless you’re doing a lot of those different things, you’re doing something that’s good for you and your family, but you’re not recognizing it as something that has major positive societal consequences.

Martin: I think there’s some hope in that regard too. Fred Kirschenmann, who is a member of the Pew Commission, they’ve had me up to speak at their beginning farmers meetings [at New York’s Stone Barns Center for Food and Agriculture, where Kirschenmann is president]. It’s incredible what is happening. I think Stone Barns can do three or four of those a year. They had two or three hundred people attend each year. There’s this great interest by younger people in changing the food system. He’s actually pretty optimistic about things.

I got interested in agricultural issues while working for political people from the Midwest. I didn’t like what was happening to rural America, the dying small towns, driving farmers off the land. It seemed that the only thing that could counterbalance the large companies’ power was the power of the government. But I think this growing base in the food movement will usher in more lasting change than anything from the top.

Q: Fred is hopeful that there’s enough momentum growing in the movement that we’ll be able to grab the attention of policy makers. They love the campaign contributions but they also love votes. It won’t be until there’s enough critical mass of people saying, this is important enough for us to vote on, that you’ll start to get their attention.

Martin: I kind of, depending on the day, vacillate between being kind of optimistic and alternately very worried. Fred talks about the food revolution and we need food citizens… The thing that worries me is we’re kind of in a race… and I’m just not sure we’re going to win the race…

We had some really good public health and infectious disease people on the commission. The more I learned about it, the more worried I became that we’re quickly sliding to an era of post-antibiotic medicine… We’re coming to a time when there might not be any antibiotics that are effective. There’s this kind of science-denying going on by the industry that is really reminiscent of the tobacco industry…

Q: Is this the issue, more than anything else, that’s most likely to grab the average consumer and gain their attention?

Martin: The Pew Commission developed 24 consensus recommendations. About half of them were in public health and five or six of those dealt with antibiotic use. Obviously, I think all 24 recommendations are critical, but if you could do three of them, I would say that banning the non-therapeutic use of antibiotics, phasing out the restrictive confinement situations, and aggressively enforcing the antitrust laws would make the most impact on how feed animals are produced. I’m at a bit of a loss as to why the antibiotic issue hasn’t affected more change by now. Self-interest is the primary thing, right?