The farm-to-table restaurant movement is predicated on the belief that if you provide diners with tasty, locally produced food, they will come. While this growing niche includes many upscale eateries, it also applies to Justin Vrany’s Sandwich Me In. So busy is the little two-year-old shop in Chicago’s Lakeview neighborhood that Vrany is in the process of hiring a sous chef to help him with the load.

Vrany’s adherence to principles of sustainability and environmental consciousness have drawn him positive media attention. He obtains his meats from sustainable producers in the region, such as Indiana’s Gunthorp Farms. Much of his produce comes from Urban Canopy, an farming project on Chicago’s South Side. He uses alternative energy sources. 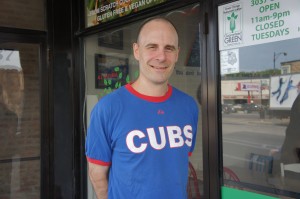 Justin Vrany stands outside Sandwich Me In, his Chicago restaurant that features local and sustainably produced food and a zero-waste ethos. The shop is located on Clark St., about a mile south of Wrigley Field.

Vrany is perhaps best known, though, for his goal of running a “zero waste” restaurant. Any refuse Sandwich Me In produces is recycled or composted. And for the past three months, he has been handing out empty five-gallon plastic containers to customers who use them for food scraps, which Vrany collects and then turns over to composting facilities.

Vrany says that in the 27 months the restaurant has been open, it has produced a minuscule amount of unrecyclable trash — and even that did not go to waste thanks to some very creative re-use. “That’s where our artists come in,” Vrany said. “We have four artists. One of them had taken the original eight gallons of garbage that we collected over two years, and they created a sculpture out of that.”

But Vrany is quick to note that a restaurant built on Good Food principles still needs to serve its customers food that tastes good, and is unlikely to survive on good green intentions alone.

He says he caught the cooking bug when he was five years old and brought serious culinary chops to Sandwich Me In’s kitchen. He was trained in culinary arts and business at Chicago’s Kendall College, and previously worked at the well-regarded Mindy’s Hot Chocolate, located in the city’s Bucktown community. Vrany says everything he serves is made from scratch.

“We could be doing all of this other stuff,” Vrany said, referring to his sustainability efforts, “but if we didn’t have great food, nobody would come back. We’re selling probably some of the highest quality sandwiches in Chicago, and we’re trying to do it at a reasonable price so people can understand that this food tastes better, so we can come back here and get it.”

The chalkboard that dominates one wall of the small storefront on Clark Street shows that a meal won’t set you back much. Sandwiches such as brisket and pulled pork are $9. A chicken breast sandwich or vegan options such as a black bean burger are $8. Salads, soups, and gluten-free options are available.

Vrany said “it’s 30 to 40 percent of the people” who come in because they are attracted by his sustainability principles, while “the rest of the people are coming in just because it’s great food.” But the restaurant provides plenty of information in hopes of converting the uninitiated. “The idea is they come in and they’re standing around waiting for their food, they notice something, it clicks a little bit. And the more times they notice more things, they get it more and more.”

The possibility of expanding the Sandwich Me In concept is not lost on Vrany, but for now he is focused on building up his one location and maintaining a work-life balance.

“I’m always leaving my options open,” Vrany said. “I also have a family too. The option right now is to bring in help so I can actually go out, network, and make this place really start hopping. And have a life.”

Sandwich Me In is located at 3037 N. Clark St., just south of its intersection with Halsted St.