Let’s be honest, for most people who attend craft beer festivals, it’s all about the beer.

But in the context of Good Food on Every Table, craft beer fits comfortably within the big tent of the Good Food movement. It is fundamentally about food artisanship and entrepreneurship. And increasingly, the craft beer sector is engaging in the kind of sustainability efforts that propel the movement.

Few beer events express that sustainability ethos more clearly than the annual Micro Brew and Food Review, which takes place Saturday (Aug. 16) in the Chicago suburb of Oak Park (which also is the hometown of FamilyFarmed.org).

The Review is co-produced by the Illinois Craft Brewers Guild (ICBG) and Seven Generations Ahead, an Oak Park-based non-profit that plans and develops sustainable communities. 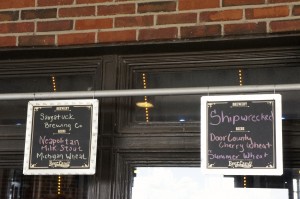 “We have the unique opportunity to partner with Seven Generations Ahead and really drive the sustainable concept at our event…,” said Justin Maynard, ICBG executive director. “They have a staff that actually strategizes concepts and formulates solutions in real-world situations. They educate and inform, and more importantly, they push the micro-waste concept at our events.”

Included in that micro-waste concept is that the event organizers do not distribute plastic bottles of water, as many do. Instead, water stations are provided throughout the site and participants are urged to either use the sampling glasses they have been provided or fill up their own reusable containers.

Maynard noted that reducing water waste is a big environmental — and financial — issue in the craft beer industry. “I am proud of our brewers who work with local organizations like the NRDC [Natural Resources Defense Council]. Clean water is very important in our world, and the Guild is working hard to educate and promote green initiatives through all of our events,” Maynard said.

Some craft brewers have gone all in on sustainability. One is Greenstar, the new microbrewery launched by Michael and Helen Cameron, the owners of the two Uncommon Ground restaurants: It is the first all-organic brewery in Illinois and one of a small handful in the United States. Uncommon Ground has been a leader in local food sourcing in Chicago for more than two decades, and has the first federally certified rooftop organic farm at one of its locations. 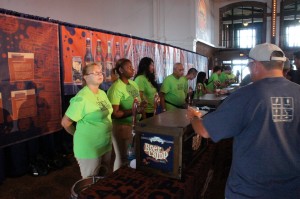 Many breweries connect with the Good Food movement on the entrepreneurial side. For example, MobCraft (of Madison, Wisconsin) — which participated in the massive Beer Camp event staged July 27 by Sierra Nevada brewery and ICBG at Chicago’s Navy Pier — is crowd-sourcing financial capital. To make things a little more fun, the producers are allowing fans to vote on the varieties of beer they brew.

More and more breweries are also seeking out locally produced ingredients for at least some of their beers. Side by side at Beer Camp were Saugatuck Brewing, which featured its Michigan Wheat beer made entirely from home-state ingredients, and Door County Cherry Wheat, made with juice from locally grown fruit, by Shipwrecked in Egg Harbor, Wisconsin.

Arcadia Ales of Battle Creek, Michigan, presented Rapunzel, a seasonal beer made with hops from nearby Hop Head Farms, a fast-growing two-year-old producer and processor that is one of the engines for the revival of the state’s long-dormant hops-growing industry. Hop Head Farms also participated in the Beer Camp event. 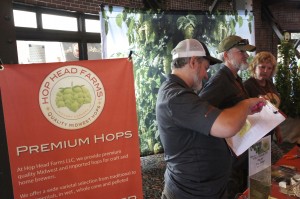 Nunzino Pizza (left) is CEO and Jeff and Bonnie Steinman are lead growers at Michigan’s Hop Head Farms, which participated in the Chicago Beer Camp event. Photo by Bob Benenson.

“We had been hoping for an opportunity to work with Hop Head Farms, and they were very receptive to our goal of using Michigan hops exclusively for this new annual product of ours,” said Tim Suprise, Arcadia’s founder and owner.

He added that some local ingredients are more available than others: “Hops are making a comeback in Michigan for sure, but local barley for malting is not a real viable option at this time. Adjuncts like honey and botanicals are typically able to be sourced locally.”

It is a trend that gets a thumbs-up from ICBG’s Maynard. “Local farmers producing fresh ingredients and making their products available to our brewers is something really special,” he said. “It’s nice to sit back and think about these things, but to actually have the chance to meet these people at local farmers markets is an absolute joy.”

The 7th annual Oak Park Micro Brew and Food Review will take place Saturday, Aug. 16 in the downtown area. The VIP session, which begins at 1 p.m., is sold out, but tickets for the general admission session that runs from 3 p.m. to 7 p.m. are available.