Millions of people get their most up-close-and-personal experiences with aquatic ecosystems by visiting aquariums. It is natural, therefore, that aquariums also serve as platforms for informing consumers about sustainable seafood practices.

While Monterey Bay Aquarium in Monterey, California, has set the pace with its Seafood Watch program, others are actively engaged in guiding people toward responsible choices that help conserve fish populations and maintain ecological balance in oceans and freshwater bodies.

One of these is Chicago’s Shedd Aquarium — located directly on the shore of Lake Michigan — which developed its Right Bite program, which works with consumers and the Chicago culinary industry to increase the availability of sustainable seafood in the region. As a part of this program, Right Bite issues consumer recommendations utilizing the seafood sustainability science of Seafood Watch.  These are tailored to the Chicago region and rank individual species in the categories “Best Choices” (color-coded green), “Good Alternatives” (yellow), and “Avoid” (red).

Representatives from Shedd will be on hand at FamilyFarmed’s Good Food Festival on Saturday, March 21, to discuss the program and ways each of us can support healthy lakes and oceans through our seafood choices. They also will hand out Right Bite wallet cards that shoppers can take with them when they go to buy seafood. A copy of the current guide, issued in January 2015, is below.

“Sustainable seafood is really crucial to what we are as a conservation organization,” said Aislinn Gauchay, Shedd’s manager for the Great Lakes and sustainability, who describes Right Bite as the aquarium’s “culinary conservation program.“ 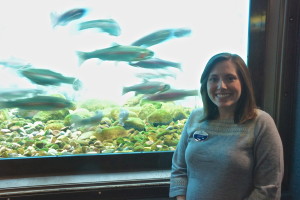 Aislinn Gauchay stands in front of a display of Great Lakes region trout at Shedd Aquarium, where she is manager for Great Lakes and sustainability programs.

She continued, “It’s critical to part of how we define ourselves as an organization. It’s a direct action that each individual who visits Shedd and cares about our programs can take to make a difference.”

Because Shedd draws from a microcosm of the general public, visitors come in with widely varying degrees of knowledge and understanding about seafood sustainability. But Gauchay said she is encouraged that society is getting past the long-held misunderstanding “that the oceans were boundless and infinite.” She added, “The fact that people can understand that sustainability and maintaining the healthy numbers of these wild fish is important is a huge win.”

The Right Bite program is, in fact, designed to be useful for those who are new to the concept as well as those who have long subscribed to sustainable seafood practices. “You can’t hit someone who doesn’t have the knowledge of how the world’s oceans work with infinite sustainability information. What we try to do is make it really accessible, to make it easy, to make it reassuring, and to make it hopeful,” Gauchay said.

While working to steer consumers toward ocean fish that are in ample supply and away from those that are facing sustainability challenges, Shedd has a particular mission: encouraging consumers to consider eating fish harvested from the Great Lakes.

One of the big challenges in meeting that goal is an outdated perception that fish taken from those waters might not be safe to eat— dating to the era, prior to the Clean Water Act and other environmental laws, in which parts of the lakes were heavily polluted with industrial wastes.

“The lakes really have undergone a significant transformation and the fish are carefully monitored as they come out of the lakes by state Department of Natural Resources offices,” Gauchay said. “One of the great joys we get to have is to encourage people that it’s a local, sustainable, healthy fish, so enjoy it. It’s going to taste delicious. One of the great things about walleye or lake whitefish and yellow perch, some of those great species, they are as tasty a fish as you’re going to try, just give it a shot.”

Some retailers were ahead of the curve in emphasizing sustainability seafood, including Whole Foods Market (which is a premier sponsor of the Good Food Festival & Conference). But the higher profile that sustainable seafood has gained, in part through programs such as Right Bite and Seafood Watch, has stimulated consumer demand, to which more mass-marketing retailers are responding.

“When Walmart made an incredible sustainable seafood commitment, it brought it to the everyday level,” Gauchay said. “No matter what level of income you are with your family, no matter what your interests are, sustainability is not something accessible only for refined palates or lots of disposable income. It’s for everybody.” 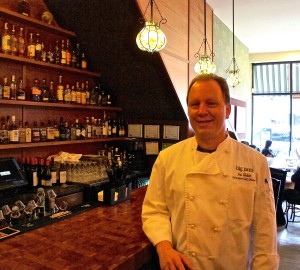 Many top chefs are also now stars of the sustainable seafood movement. One of these is Paul Fehribach, chef-owner of Big Jones restaurant, which serves traditional Southern cuisine in Chicago’s Andersonville neighborhood. Fehribach is on the board of the nonprofit Chefs Collaborative, which promotes the values of the Good Food movement among the culinary community.

He is a regular participant in Chefs Collaborative’s annual “trash fish” dinners, which, despite its derogatory-sounding name, is about lesser-known species of fish that are good to eat and have ample population stocks.

Fehribach notes that some of the most popular food fish today once were much less highly regarded. “Lobster is an erstwhile trash fish, if you go and look back in the colonial times, the indentured servants had to petition to please, only feed us lobster once a week,” he said. He noted that Gulf of Mexico redfish was a trash fish until celebrated Cajun chef Paul Prudhomme popularized spicy blackened redfish.

Sometimes it’s all in the name. “Chilean sea bass at one time was very undesirable,” Fehribach said. “It had its name changed from Patagonian toothfish. Then they marketed it as Chilean sea bass and all of a sudden it’s exotic and wonderful.” 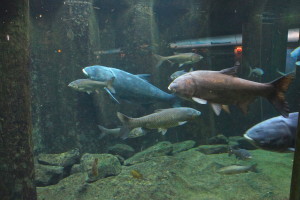 Asian carp, on display at Chicago’s Shedd Aquarium, is an invasive species that is causing problems in some Midwestern waterways. But some sustainable seafood advocates say it has potential as a food fish.

He added, “By promoting trash fish, I think what we’re doing is sending a message that’s very much like the message of eating seasonally. But it really doesn’t necessarily have to do with season, but market-driven cooking, what’s coming off of the boat today.” Naming varieties such as red drum, triple tail, amberjack, scup, and sanddab, Fehribach said, “It can be fun and interesting, you get to learn about a whole bunch of different species of fish.”

Fehribach will receive of FamilyFarmed’s Good Food Chef of the Year award at the Good Food Festival, and also will be dishing up fare from Big Jones at the Localicious tasting event on Friday night, March 20.