Bread, especially bread made with wheat flour, has come under scrutiny in recent years. Some nutritional experts and consumers have turned against it, viewing it as the root of a variety of health issues, from gluten sensitivity to weight gain. These sentiments spawned a rapid rise in interest in gluten-free bread products.

But there is a counter-movement that says people need not give up bread, a diet staple in most cultures around the world since the dawn of civilization. Instead, their advice is: Eat better bread. Bread made from wholesome whole grains that contribute to health, rather than the commodity wheat used for most bread that is grown more for its high yields than its nutritional (or flavor) value.

The bonus is that bread made the better way — which also is the traditional way — tends to be delicious. These are hearty, crusty loaves that eaters can savor, rather than wolf down to fill their bellies. And along with the increasing availability of these types of Good Bread in the marketplace, they also are surprisingly easy and inexpensive to make at home.

These are things that attendees at FamilyFarmed’s Good Food Festival can learn by attending a special master class conducted by Greg Wade, the head baker for One Off Hospitality, one of Chicago’s leading restaurant and retail food groups. Wade will discuss his advocacy of better bread, while teaching class participants how to make it, at the master class on Saturday, March 21 at Chicago’s UIC Forum.

“I think we’ve gotten a pretty good method of how to make this approachable and how to make it not intimidating,” Wade said in an interview at his Publican Quality Bread bakery near “Restaurant Row” in Chicago’s West Loop neighborhood.

The theme will be reinforced at the Good Food Festival by a workshop led by Dave and Megan Miller, whose Baker Miller bakery, restaurant, and millhouse has made a big impact on the city’s food scene since it opened last fall. They will demonstrate how to mill flour, oatmeal, and polenta at home using local and heritage grains and why this will change the way you bake. 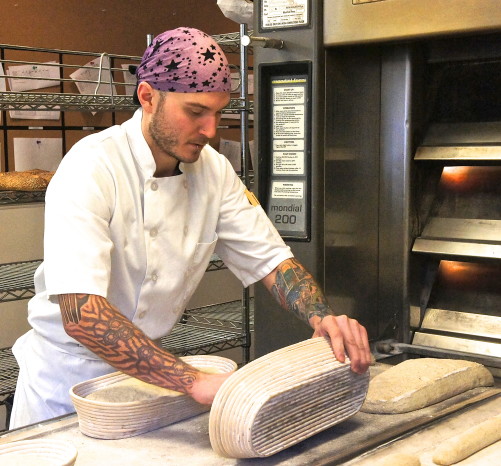 For Wade, too, it all starts with high-quality grain. “We’re really trying to find good, locally sourced flours,” said Wade. He noted he gets most of his flour from Spence Farm, a pillar of the regional Good Food movement located in Fairbury, Illinois, about a two-hour drive southwest of Chicago. According to Wade, Spence Farm produces 13 different kinds of grains specifically for his bakery. 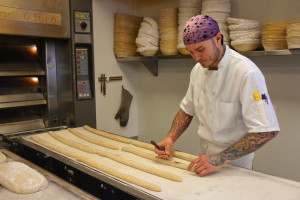 His breads are served at One Off Hospitality restaurants created by top chef Paul Kahan, such as Blackbird, Nico Osteria, and The Publican, and a growing number of other clients.

His loaves are sold retail at Publican Quality Meats, an adjunct to the restaurant that is well known for its house-processed, locally produced meat cuts, sausages, and charcuterie. Publican Quality Breads also will be available soon at Treasure Island, a local supermarket chain. 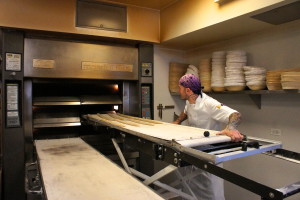 Wade is a thoroughly modern baker, with copious amounts of body art. Like many people in the food trade, the Wisconsin native started off in another direction, entering college in Milwaukee with the intention of becoming a German teacher. He determined pretty quickly that was not going to be his career path, and he switched to the culinary arts program at the Illinois Institute of Art in Chicago.

Baking was a family thing in Wade’s household when he was growing up, and his knack for it — and for integrating adventurous ingredients to flavor his breads — soon became obvious to his instructor. “If it was a Latin food class, he’d give me a plantain and a jalapeno pepper, and say, ‘Make a bread around it,’ Wade said. “I got good at putting interesting garnishes in bread and baking some interesting things.”

It did not take long after his graduation for his work in restaurants to attract high-level attention. He was hired first by chef Stephanie Izard when she was launching her Girl and the Goat on Restaurant Row that has earned her acclaim well beyond Chicago. There Wade had to conquer one of the great challenges in the bread world: baking in a wood-burning oven, a technique notorious for its challenging temperature control.

“It was a little rough at the beginning because I went through so many thermometers, trying to figure out just what the temperature was,” Wade said. “I found the best way to do it was just stick my arm in and count. If I could count to 10 and my arm didn’t want to fall off, I could bake in there.” 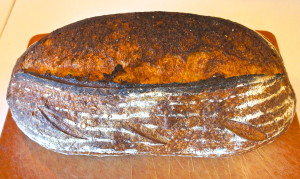 He got to work with a more conventional oven after Izard developed her Little Goat Diner across the street in 2012, which has a small retail operation attached. He baked there until Kahan recruited him last year to open the wholesale bakery that became Publican Quality Bread.

When asked the biggest challenge he had to overcome that also would have to be mastered by home bakers, Wade said it’s all about the dough.

“It takes a long time to be able to touch the dough the right way,” he said. “Some people will come in here and it’s obvious they’ve never worked with dough before and I’ll see them and they’re just grabbing at it, it’s sticking to them, it’s just a mess, it’s just not doing what they want it to do. Learning the feel is one of the most challenging things.”

Attendees at Wade’s master class at the Good Food Festival will certainly come away with a better sense of how to learn that feel. For more information about FamilyFarmed’s Good Food or to buy tickets, please visit the event website. 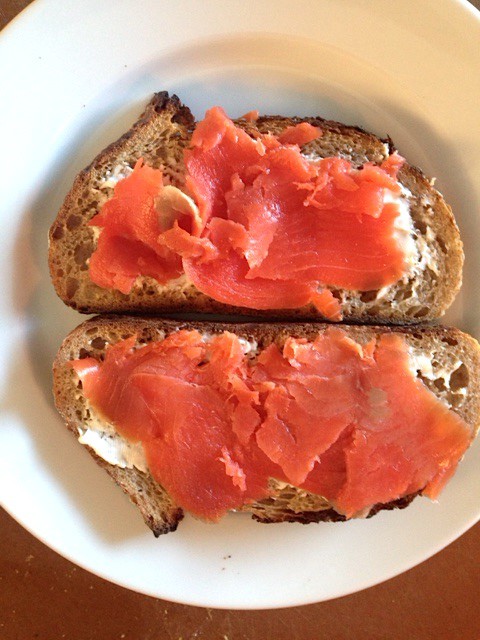