Almost every major city has a convention center. And in recent years, concern has risen — among the managers of these show places and the organizations with which they partner — about reducing the costs and the environmental and social impacts of waste resulting from the big events they stage.

This issue spawned the creation in 2003 of the Green Meeting Industry Council, which is based in Atlanta, Georgia. And Chicago’s McCormick Place — the nation’s largest convention facility at 2.6 million square feet — is among those taking the lead in the “sustainable meetings” field.

SAVOR… Chicago at McCormick Place this month became the first foodservice company in Chicago to receive a prestigious Level One certification for Food and Beverage for Environmentally Sustainable Meetings, Events, Trade Shows, and Conferences. This certification — based on standards development by the first ASTM International — was created under the leadership of the Green Meeting Industry Council. 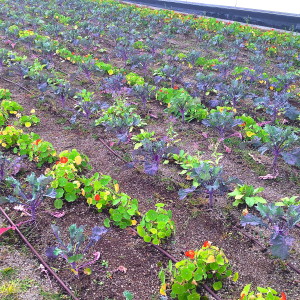 Connie Bergeron, president of the Green Meeting and Industry Council, said in a SAVOR… Chicago press release, “Responsible environmental and social practices in the meeting industry are a global concern. We are delighted to see SAVOR…Chicago take the lead in the Food and Beverage sector in Chicago and hope that this will encourage other foodservice providers to pursue certification.”

Kevin Jezewski plays a central role in these efforts as is Director of Sustainability and Special Projects for SAVOR… Chicago, the food and beverage provider that runs the foodservice and some other operations for the massive meeting facility.

Jezewski has worked closely with FamilyFarmed, a Chicago-based nonprofit that works to expand markets for local and sustainable food, in part by connecting farmers and other producers with big institutional purchasers such as McCormick Place.

This relationship extends to SAVOR’s participation in Family Farmed’s annual Good Food Festival & Conference, which begin Thursday and runs through Saturday (March 19-21) at UIC Forum on the University of Illinois at Chicago campus.

Jezewski will represent SAVOR and McCormick Place today (March 20) on a panel titled “Local Foods Pricing: Making It Win-Win.” The panel, moderated by Eloise Karlatiras of the Green Chicago Restaurant Coalition, will also include Andrew Lutsey of Local Foods, a distributor that is building an innovative retail market in Chicago; Stefanie Garcia of Whole Foods Market, a premier sponsor of the Good Food Festival & Conference; Lior Lavy of artizone, which does home delivery of artisan foods; and Irv Cernauskas of Irv and Shelly’s Fresh Picks in the Chicago suburb of Niles, a food hub that does home delivery of local and sustainably produces meats, produce, and dairy.

[For more information about the Good Food Festival & Conference, please see the end note and visit the event website, where you can also purchase discounted advance tickets.]

Jezewski said in an interview that SAVOR took charge of building McCormick Place’s sustainability efforts without being required to do so by the Metropolitan Pier and Exposition Authority (MPEA), which oversees both the convention center and Navy Pier, a Chicago tourist magnet.

“As a company, SAVOR is committed across all of our divisions to sustainable practices. This isn’t something we were told to do. We did it because creating green initiatives is the right thing,” Jezewski said. “Of course, MPEA has a high interest in it and their own initiatives, which we augment. We developed both short-term and long-term plans designed to establish and maintain best practice levels. We can’t just say, ‘We want to recycle.’ There have to be goals and a plan to be successful.”

He noted that McCormick Place has been very responsive to the growing demands for sustainable practices among convention planners. He related how one organization whose business McCormick Place was seeking sought a condition that the facility be powered by wind-produced energy. “We collectively took on that challenge, and before their show started, this whole facility was powered by wind,” Jezewski said. 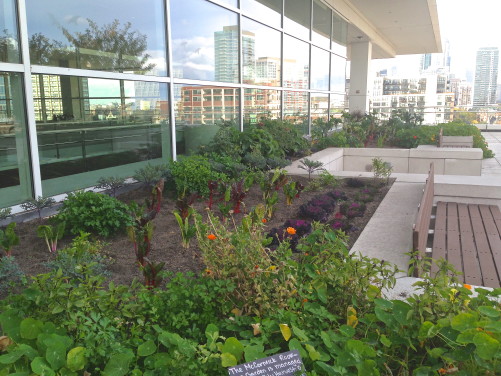 Convention centers who fail to address these demands risk falling behind in the race for convention bookings, which are expected to generate significant economic energy and revenues for their communities. “At every convention that I’ve walked the floor, there are areas devoted to sustainability, from foodservice to technology to packaging. Those sections range from huge to small, but it is represented. And for us, we do realize that our commitment to green initiatives is definitely a competitive advantage,” Jezewski said, adding, “There are big expectations for sustainability in this industry.”

The sustainability efforts extend to the broad rooftop of the expansive West Building on Chicago’s South Side, which is now home to a well-tended garden and beehives that produce vegetables, fruit, and honey for SAVOR…Chicago’s McCormick Place foodservice.

“The rooftop garden amazes even our staff. As we grow it, it is served in our operations. Last year we harvested nearly 8,000 pounds of fresh vegetables and herbs that were served to McCormick Place visitors,” Jezewski said. “The honey from our beehives is amazing and the bees serve a purpose for our garden. It is a great example of great stewardship delivering great results that also taste great.”

Kevin Jezewski is Director of Sustainability and Special Projects for SAVOR… Chicago, the food and beverage provider at the McCormick Place convention center. Here he explains the system, set up for McCormick Place by EcoLogic Solutions, that creates non-toxic cleaning solutions

Jezewski also expressed praise for FamilyFarmed’s Good Food Festival & Conference, which he credits for enabling SAVOR to connect with “alliance partners” that have benefited their sustainability efforts.

“As an event, it has been tremendously helpful to our efforts. It’s where we found the company that helped us to eliminate our use of toxic cleaning chemicals, and our tofu company. It helps us to easily see what’s new in the industry, find partners and collaborate,” Jezewski said. “We need more of these fests to help grow the industry and get the farmers in contact with the buyers.”

FamilyFarmed’s Good Food Festival & Conference began Thursday and runs through Saturday at UIC Forum on the University of Illinois at Chicago campus. Members of the public can purchase tickets for all segments.

The first two major portions are aimed largely at those with a professional, financial, or activist interest in the Good Food movement: the Good Food Financing & Innovation Conference on Thursday, and Trade Day during the day hours on Friday. The main events designed for the general public at the Localicious food and drink tasting party on Friday evening, and the Saturday Good Food Festival, the big celebration of the fast-growing Good Food movement.

For more information about the three-day event and to buy tickets, please visit the event website.