There are plenty of business success stories that emerge in the food world. To be a Good Food success story — like the four featured at FamilyFarmed‘s Good Food Financing & Innovation Conference in Chicago Thursday — has a special requirement: a commitment to the values of local, sustainable, natural, and healthy food that is the foundation of the fast-growing Good Food movement.

The featured businesses were Argo Tea, which sells premium tea drinks in its stores and in bottles; Lifeway, which dominates an expanding market for kefir, a probiotic drink of Eastern European origins; Koval, which in 2008 became the first distillery within Chicago’s city limits since Prohibition; and FarmedHere, which grows herbs and greens in a vertical indoor farm.

“Our passion is to blend tea with all kinds of tasty, all-natural ingredients,” said Arsen Avakian, the immigrant from Armenia who founded Argo Tea 12 years ago. “Real ingredients are going to taste naturally amazing.” 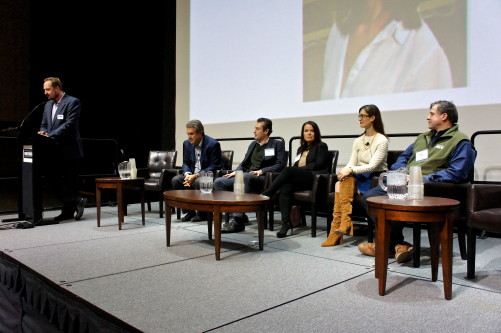 “The cat is out of the bag that what we eat affects our health,” said Julie Smolyansky of Lifeway Kefir, whose parents came to Chicago from the former Soviet Union in 1976 when she was a baby and whose late father started the company. There is plenty of cheap food, she added, “But we end up paying for it in the end in health care dollars. Healthy foods should be available to everyone, and demand for healthier foods is coming from consumers.”

“Our grains are organic, sourced locally,” said Sonat Birnecker-Hart, who with husband Robert Birnecker launched the city of Chicago’s now-growing craft spirits sector when they opened Koval seven years ago. She continued, “We’re not using any flavorings at all.”

Mark Thomann, interim CEO of FarmedHere, said the company — which is in the vanguard of the vertical farm movement — is influenced by the question of how to feed a world of billions of people with both social and environmental responsibility. “The technologies are getting better, and they enhance yields and save energy dollars,” said Thomann, who said he likes the tag line of “Feeding Tomorrow Today” for the company.

The panel was moderated by Marc Schulman, who knows a little something about entrepreneurial food success stories. He is the president of Eli’s Cheesecake, a popular Chicago dessert maker that also follows a Good Food ethos, seeking ingredients such as honey from local producers and providing support for institutions such as the Chicago High School for Agricultural Sciences and the Greater Chicago Food Depository.