Guest contributor Karen E. Watson is a consultant, focused on creating greater demand for health through the combined power of data, marketing, popular culture and policy. Her collaboration with the White House and the Partnership for a Healthier America to encourage Americans to drink more water was hailed by first lady Michelle Obama as “groundbreaking.” 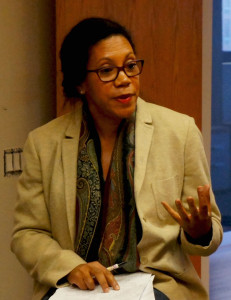 Early this year, the United States Department of Agriculture (USDA) issued new guidance to Americans on how much sugar we should be consuming daily as part of a healthy diet.

As a reflection of those new guidelines, the U.S. Food and Drug Administration (FDA) will mandate that, within two years, the nutrition facts label on packaged goods carry a percentage daily value (%DV) for total added sugar enclosed in the package. The guidance is that added sugar should not “exceed 10 percent” of total calories. The FDA-mandated labeling will reflect that recommendation and try to make the guidelines easier for Americans to understand.

The truth is, as almost any doctor or health professional will tell you, we don’t need any added sugar because our bodies make all we need from the foods we eat. The USDA’s own dietary guidelines 10 years ago pointed out that consuming added sugar, while it provides calories, provides “little, if any, of the essential nutrients.”

The new dietary guidelines and label recommendations are both still being heavily contested by lobbyists in Washington.

Even so, the word is getting out around the world that sugar — especially the sugar we are drinking, in sodas, sweetened teas, coffees and even in fruit juice — is a major cause of the obesity epidemic and the chronic diseases with which that epidemic is often associated, according to a study last year by Harvard University’s T.H. Chan School of Public Health.

In April of this year, the McKinsey Global Institute reported that one third of the world’s population is either overweight or obese. According to the report, the total economic impact of obesity is about $2 trillion a year, or 2.8 percent of the world’s gross domestic product.

Even as policy makers, Wall Street analysts, ‘big food’ marketing analysts and health care economists are trying to assess the impact of the proposed label changes on public demand for sugar, agricultural and trade economists are anticipating the changes with some angst and handwringing.

We should be paying attention. Shelly Goldberg of the Wall Street Journal reported last spring that sugar prices have been dropping since 2011. There are multiple reasons, including a drop in demand by health-conscious Westerners, even while consumers in developing countries are increasing their consumption.

According to the Food and Agricultural Organization of the United Nations, sugar cane is the number-one agricultural commodity in the world by volume; by value, it is number nine. Nations with the fastest growing economies in the world — Brazil, India and China — are the world’s top producers of sugar cane.

In October, Jonathan Brooks, a senior economist at Organization for Economic Cooperation and Development (OECD) working in the Trade and Agricultural Directorate, told an assembled group that the detrimental economic impact of global trade agreements pales in comparison to impact of decreased demand for sugar that will result when consumers begin to understand and adopt the new U.S. and global dietary guidelines.

So, how do we balance the burden that sugar is putting on global health with the positive role that it plays in propping up the global economy? That question points to the growing realization that the world’s agricultural policies do not focus on ameliorating the health of its people. That was the subject matter of a group of health and agricultural experts in a meeting to which I presented at the OECD last month. Increasingly, policy makers are realizing that we must take action to craft such health-conscious policies.

With one third of the world overweight or obese, we absolutely need to address the sugar in our diets. Really, shouldn’t we all remember that health is wealth? But let’s not lose sight of our interconnectedness and the true complexity of change as economies adjust and, bit by bit, we learn how to improve our nutrition.