But this year’s program, thanks to an alliance between FamilyFarmed and the James Beard Foundation, will also spotlight the culinary community’s contribution to accelerating the Good Food movement. Read about the lineup of top chefs participating in the “Recipe for Change” panel in the article below.

To read about all elements of the Good Food Festival & Conference and to buy tickets, please click here.

FamilyFarmed is presenting its 12th annual Good Food Festival & Conference March 24-26 at Chicago’s UIC Forum. Its roots are in a one-day trade show in 2004, the first in the Midwest focused on locally and sustainably produced food. That trade show remains the centerpiece of the middle day of the three-day event, and this year will feature nearly 100 exhibitors seeking new customers and trade buyers; many will have products available for individual purchase. 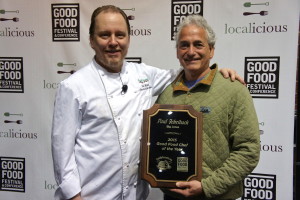 Paul Fehribach of Chicago’s Big Jones restaurant (left) received the Good Food Chef of the Year award from FamilyFarmed President Jim Slama at the 2015 Good Food Festival. This year he is participating on the James Beard Foundation’s culinary panel at the Trade Show and Industry Conference on March 25.

But that Friday programming, now known as the Good Food Trade Show and Industry Conference, has expanded greatly to include panels and discussions of a wide range of Good Food business and policy issues — and this year takes it to a new level with a panel of all-star chefs presented by the James Beard Foundation (JBF).

The session, titled “Recipe for Change: How the Culinary Community is Creating a Good Food System,” will take place at 4 p.m. on Friday, March 25. Moderated by Kris Moon, vice president of the James Beard Foundation, the panel includes:

• Rick Bayless, a master of regional Mexican cuisine at Chicago’s Frontera group of restaurants and a multiple James Beard Foundation Award winner. He pioneered efforts to help develop a market in Chicago for regional producers through his restaurants’ purchasing policies, and his Frontera Farmer Foundation provides financial assistance to help small farmers succeed.

• Paul Fehribach, whose deep historical research is reflected in the authenticity of the traditional Southern cuisine at his Big Jones restaurant in Chicago’s Andersonville neighborhood. Fehribach’s deep commitment to purchasing sustainable, heirloom and heritage ingredients for his recipe prompted FamilyFarmed to honor him as its 2015 Good Food Chef of the Year.

• Bruce Sherman, who since 1999 has presented exquisite, broad-based cuisine made with locally and sustainable ingredients at North Pond, located in one of Chicago’s most beautiful parks. The winner of the James Beard Foundation’s 2012 Best Chef Great Lakes Award, he obtains many ingredients from Green City, Chicago’s premier farmers market.

• Abra Berens, a rising star on the Chicago’s Good Food scene, is executive chef for Stock Café at the retail market run by Local Foods, a Chicago distributor of local and sustainably produced food. Her menu changes frequently and it prioritizes the seasonal products available on the shelves of the Local Foods market. 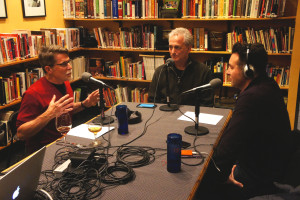 The James Beard Foundation, for the second consecutive year, is holding its annual awards ceremony — the “Oscars” of the nation’s culinary arts — in Chicago. The event will be held May 2 at the Lyric Opera House.

The Culinary panel will segue into another new feature of this year’s Trade Show: the Good Food Industry Networking Reception from 5 p.m. to 7 p.m. As its name suggests this event is aimed at facilitating new connections between food buyers, sellers and others engaged in growing the market for Good Food. Delicious treats will be provided by local food producers and craft beverage makers.

Another highlight of the Friday programming is a nearly day-long Food Policy Conference, featuring nine panels covering a broad spectrum of issues that include reducing food waste while assisting the needy, seed saving, urban agriculture, Good Food and health, assistance for military veterans who farm, and fair labor practices in the food industry. The Chicago Food Policy Action Council will discuss its efforts to persuade the city of Chicago to implement a Good Food Procurement Policy for its programs, based on a similar plan instituted in Los Angeles. 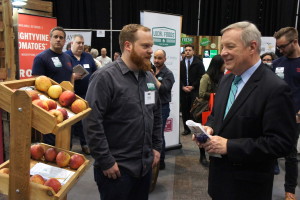 The fast-growing consumer interest in healthier, more sustainably produced food — and the powerful economic benefits of an expanding Good Food market — has drawn increasing attention from policy makers, who turned out in record numbers for the 2015 Good Food Festival & Conference. This year, FamilyFarmed will welcome its first U.S. Cabinet member, U.S. Agriculture Secretary Tom Vilsack, who is scheduled to address the Financing & Innovation Conference at 9:15 a.m. on Thursday, March 24, the opening day of the three-day Good Food Festival & Conference.

Meet the Food to Market Challenge 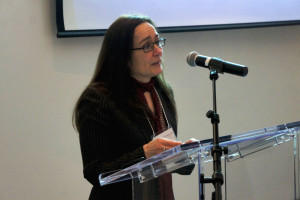 Renee Michaels is vice president with the Kinship Foundation, which partners with The Chicago Community Trust on the Food:Land:Opportunity program that is sponsoring the Food to Market Challenge.

Another new feature in the Friday agenda is a lunchtime work session to enlighten attendees about the Food to Market Challenge, a competition that will award $500,000 to the team that is judged to have presented the best proposal for improving the Good Food supply chain in the Chicago region.

The Food to Market Challenge is being staged by Food:Land:Opportunity, a joint project of The Chicago Community Trust and The Kinship Foundation, whose vice president, Renee Michaels, will also speak at the Friday Opening Symposium; the competition is supported by the Searle Funds at The Chicago Community Trust. To read details about the competition, for which applications will be accepted through April 26, please click here.

The information-packed Friday program will get under way at that Opening Symposium at 9 a.m. The scheduled participants represent the breadth of interests covered in the day’s programming. Along with Renee Michaels of the Kinship Foundation and Kris Moon of the James Beard Foundation, they include (alphabetical by last name):

• Charlotte Flinn of Flinn Consultants, the chairman of the FamilyFarmed board of directors.

• Wes King of the National Sustainable Agriculture Coalition, a Washington, D.C., nonprofit that is the leading federal food policy advocate for the sustainable food sector.

• Leland Strom of FARMIllinois, a project that draws upon the expertise of 150 stakeholders from across the state’s food and farm industries to produce a strategic plan for the Chicago region and the state to become “a leading global hub for food and agriculture system innovation.

The Beginning Farmer of the Year Award will be presented immediately after the Opening Symposium by the Angelic Organics Learning Center of Caledonia, Illinois.