There are many words that are commonly associated with “Good Food.” Until recently, the dried meat product known as jerky was not one of them. But one sign of the growing influence of the Good Food movement is that many products not normally seen as part of a well-balanced diet are being adapted into healthier and more sustainably produced versions.

One of these is Think Jerky, which is made with grass-fed meat, lower sugar and salt content than most commercial versions of the product, and recipes created by well-known chefs. Think Jerky participated as an exhibitor at FamilyFarmed‘s Good Food Festival March 26, and we invited company founder Ricky Hirsch to write the following article about what makes his product different.

What do you think of when you are thinking about Good Food? Maybe it’s grass-fed beef. High flavor but low sugar. Perhaps a delicious blend of ingredients and spices, designed by world-class chefs. 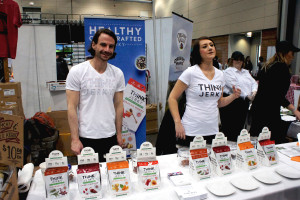 You probably aren’t thinking about beef jerky. But as the founder of Think Jerky, the product that is described in the paragraph above, I am hoping to persuade you that you should.

I started Think Jerky because I wanted to make beef jerky cool. Jerky was one of the only foods I would eat as kid, but I gave it up when I was old enough to understand an ingredient list. This is not the kind of commercial beef jerky you would buy by the sack at a convenience store or a truck stop. This is a snack food with a gourmet flavor that aims to be good to both your taste buds and the rest of your body.

The idea of Think Jerky is to Think Before You Eat:

• Think about what you’re putting in your body: All of our proteins are pasture-raised and have no added hormones or antibiotics.

• Think about who’s making your food: All of our recipes are crafted by chefs in kitchens, not scientists in laboratories.

• Think about your community: We partner with the David Lynch Foundation and donate 10 percent of our profits to teach veterans with PTSD how to meditate to heal themselves naturally.

Think Jerky is a combination of many different ideas I had that came together to become what I believe is a real special product, and which has received a very positive response from consumers who have tried it.

I have always believed in portion control, high quality ingredients, and partnering with the best people.

My vision from the beginning was having a female celebrity walk out of a gym eating a bag of Think Jerky instead of a protein bar. (In case you didn’t know, a lot of those protein bars are as high in sugar as candy.) In order for that to happen, it has to be healthy, delicious and aesthetically pleasing — and those are three things jerky never was.

For us, we are selling “health.” We consciously minimized the salt and sugar, as most jerkies are pumped full of it to reduce cost. We use about half the salt and sugar as some of our competitors, and are proud to be 50 cents more per bag. We only use sustainably raised proteins that have no added hormones or antibiotics, and everything is non-GMO, gluten-free and paleo-friendly.

I designed the packaging and brand myself and focused on the nutritional information and ingredients as opposed to images of cattle. We all know what jerky is, but what we don’t know is how healthy it can be, if made correctly, and that’s what we did with Think Jerky. 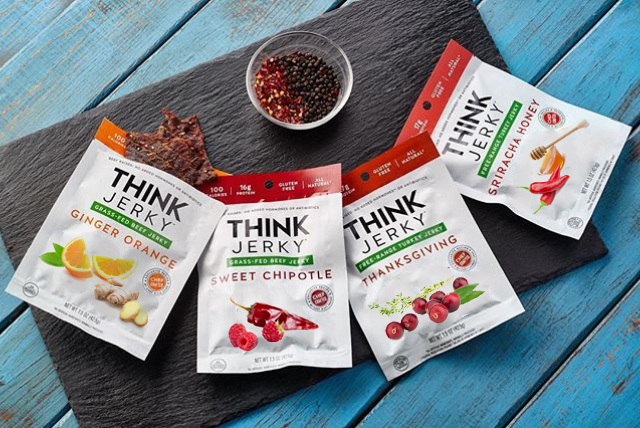 Think Jerky currently comes in four flavors, none of which likely was before associated with jerky.

But let’s not forget the most obvious point. Think Jerky will be successful in the consumer market only if enough people conclude that it is a really tasty snack. So beyond being healthy and subscribing to the ideals of the Good Food movement, we are creating the future in consumer packaged goods by having chefs who are all partners in the overall brand.

We currently have three chef-partners who are all responsible for their own flavors. “Think” is the brand and the chefs are a part of our brand, which is unique. This way no single chef is the brand, and we can introduce new chef-partners and flavors as our product line grows.

Our current product lineup is made up of  Sriracha Honey Free-Range Turkey Jerky and Ginger Orange Grass-Fed Beef Jerky, created by Chef Gale Gand; Sweet Chipotle Grass-Fed Beef Jerky by Chef Matt Troost; and Thanksgiving Free-Range Turkey Jerky by Chef Laurent Gras. We have a new chef and flavor lined up for this summer that we are really excited about.

And Think Jerky is just the beginning. We hope to evolve into Think Foods, a multi-product company in which everything we make is healthy, delicious, and crafted by some of the best chefs in the country.