This week (Jan. 29-Feb. 5) is national Meat Week. We at FamilyFarmed advocate for foods, including meat, that are produced as locally as possible using sustainable, humane and fair practices.

So who better to help us inform readers about why this is important than Rob Levitt, the restaurant chef turned butcher, whose store The Butcher & Larder — located in the Local Foods grocery store in Chicago — embeds those principles in how it sources and sells beef, pork, lamb and poultry.

Levitt, who was trained at the Culinary Institute of America in New York, recently received a Good Food Award, presented in San Francisco by Seedling Projects, for The Butcher & Larder’s charcuterie. Levitt said it was great to win the award, but added that the best part of the experience was “a community-oriented discussion about supporting people who need support and getting Good Food into more homes, and how do we take all of this wonderful stuff we do and use it to feed more people, to support more people, to reach into neighborhoods where Good Food isn’t available, to teach people skills that they don’t otherwise have… That was a really hopeful, inspiring thing to participate in.”

Given that FamilyFarmed’s motto is Good Food on Every Table, we couldn’t agree more.

Levitt is a friend of FamilyFarmed, and he will be making a return appearance by conducting a chef demo at our Good Food Festival on Saturday, March 18 at Chicago’s UIC Forum. The Festival, our big public celebration of the rising Good Food movement, caps our three-day Good Food Festival & Conference. To learn more about the event, please click here. 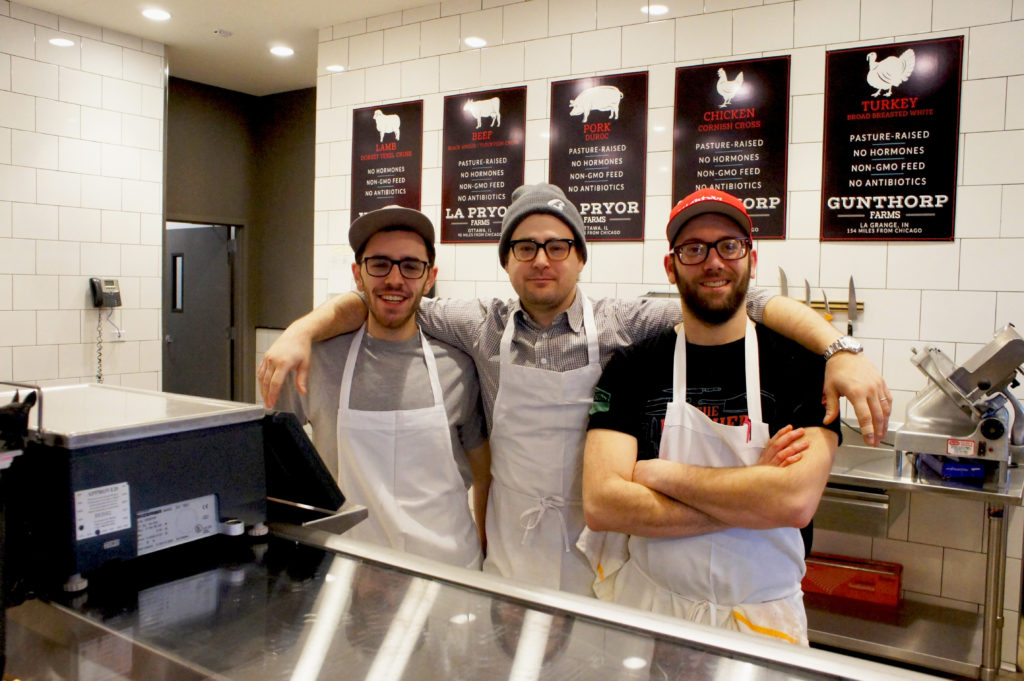 Rob Levitt (center) is owner and head butcher at one of Chicago’s leading meat shops — The Butcher & Larder, located inside the Local Foods grocery store in the Bucktown neighborhood. He is flanked in the photo by staff butchers Anthony Capozzoli (left) and Ilya Bonel. The placards on the wall show the Chicago-region farms from which they source most of their meat. Photo: Bob Benenson/FamilyFarmed

Every food product seems to have a day, but meat gets a whole week. So, as we mark Meat Week (Jan. 29-Feb. 5), we need to explain what leading Chicago butcher Rob Levitt means when he says we should eat less meat… but better meat.

The first part of the equation is portion control, said Levitt, who started his store, The Butcher & Larder, independently in 2011 and then moved it inside the Local Foods grocery store in Chicago’s Bucktown neighborhood when it opened in 2015.

“It’s a pretty commonly discussed thing these days that people are just accustomed to portions that are larger than necessary. There’s a lot of reasons why that happened, but the industrialization of food led to cheaper meat, which meant people could eat more… So if you get a steak at the supermarket that’s 27 ounces and it’s $8, then that over time became a portion size, and that’s crazy,” said Levitt. 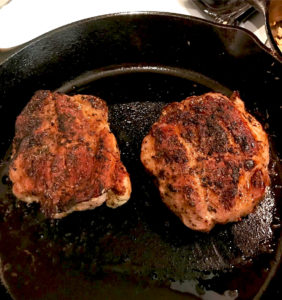 Portion control is a clincher for stretching your meat budget. As Chicago butcher Rob Levitt says, the industrialization of agriculture lowered the price of meat and encouraged people to eat portions much larger than they need. Each of these coppa steaks from The Butcher & Larder, from a delicious, relatively inexpensive but hard-to-find cut, could have made a dinner portion for one. But the meat is so rich and flavorful that it was easy to make two meals for two out of these steaks. Photo: Bob Benenson/FamilyFarmed

The problem, Levitt said, is that factory-farmed meat is less satisfying than the sustainably produced, largely pasture-raised meat — from Midwestern producers such as Gunthorp, La Pryor, Kilgus and Ferndale — that is featured at The Butcher & Larder.

“It’s not very satisfying, and that’s why you feel the need to eat so much of it. And then you don’t feel very well, and it has effects on your system that are not great,” Levitt said. “But if you get something that’s really high quality and you eat less of it, you are eating an appropriate portion size and you also feel sated, you feel better. You’re satisfied by the savory quality of the meat and the sort of richness, the beefy flavor. Everything that you needed 27 ounces to get, you can get in a 4 to 6 ounce portion.”

That gets us to one of the most delicate issues concerning sustainable meat: the price point. Meat produced from an animal raised with tender, loving care on a small farm, and then cut by expert butchers dedicated to reducing food waste by using the whole animal, is not going to be cheap. “The thing that people have to understand is that there is never going to be a Costco full of sustainable food,” Levitt said. “It’s impossible, and it’s not the best way.”

That’s why the philosophy of “eat less but better” can help make Good Meat accessible for most people, even those on a budget. Walk into Local Foods and your first glance at the prices in The Butcher & Larder’s meat case might make you blink a little, especially if you are used to shopping in a big-box grocery store. But look closer and you will see that many of the cuts are at least half the price, and often much less, than restaurant cuts such as ribeye and New York strip. When you divide again for smaller portion size, then Good Meat becomes more in (and on) your range. 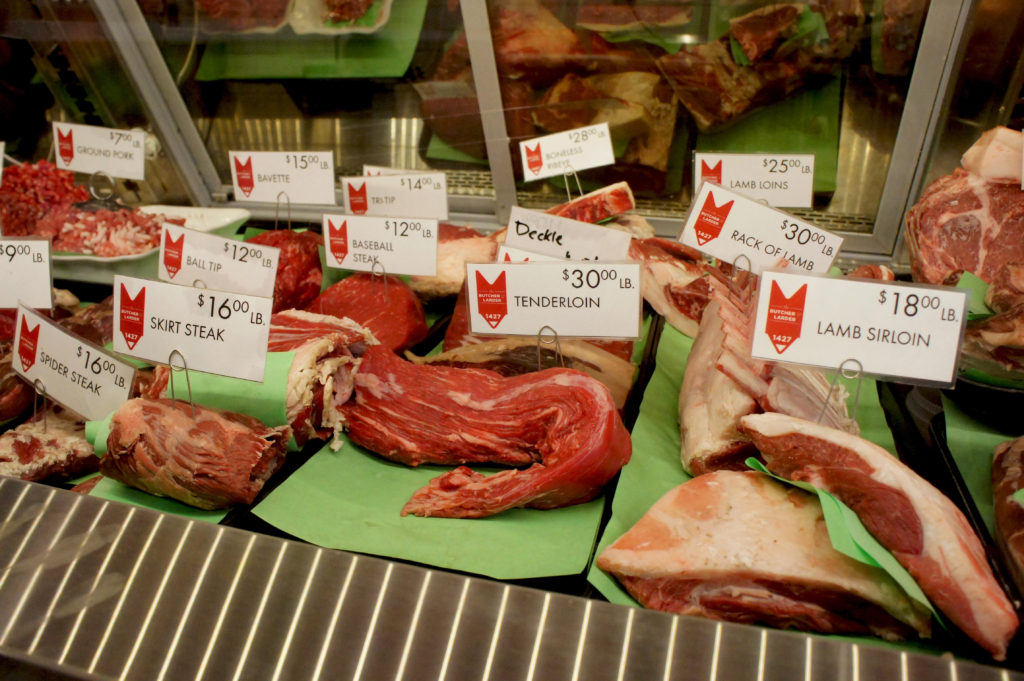 Top-grade, sustainably produced meat is not cheap, but you can eat very well on a budget, especially if you exercise portion control and use recipes, such as soups, stews and chilis to extend the meat. Butcher shops such as Chicago’s The Butcher & Larder at Local Foods — whose meat case here covers a wide range of prices for different cuts — has a well-informed and friendly staff that will explain what you do with some of the lesser-known pieces. Photo: Bob Benenson/FamilyFarmed

The Butcher & Larder is customer-oriented to the max, and Levitt and his team take the time to explain what some of the less familiar cuts (such as chuck flap, bavette and baseball steak) are, why they are great values, and how to prepare them. (The latter is helped when your shop is in the middle of a grocery store than also features locally and sustainably produced vegetables, fruits, sauces and condiments). 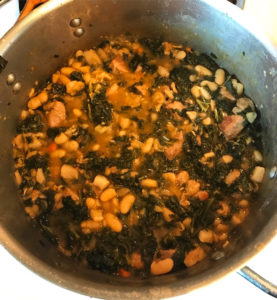 Stews and soups can help you make meat go a long way. This stew, from a recipe by cookbook author Mark Bittman, contains a pound and a half of boneless pork shoulder from The Butcher & Larder, sustainably produced cannelini beans from a Michigan farm (12 ounces dry), and a bunch of kale. The meat makes up well under half the volume of the finished dish. Photo: Bob Benenson/FamilyFarmed

Levitt explained, “The ideal situation for us is to get a new customer in the building, have them look at the meat case and say, ‘What is this? I don’t recognize that.’ And then encourage them not to jump right into a coppa steak or a chuck flap or a pork eye round, but to tell them to get the things they’re comfortable with. If they are worried about price, I’ll say, ‘Get a pound of ground beef and make burgers. Roast a chicken.’”

Once customers have tried his products and reached a comfort level, Levitt said, “We’ll start talking to them about all of the different options. We’ll say you could take this bavette or you can take this chuck flap or whatever it’s going to be and we talk them through how to cook it. I’ve regularly told guests, you take this home, I’m here all day tomorrow, from 9 to 5 or 6. If anything comes up, just call.”

There are also so many delicious ways of stretching your food budget by using meat as an ingredient in soups, stews, chilis, stir fries, casseroles and other preparations — which also have the benefit, for people with busy lives, of being one-pot dishes that can feed you and your family for days. Levitt is an advocate of using a slow cooker (often referred to by the Rival brand name Crock-Pot) as an easy way to make delicious dishes that go a long way. 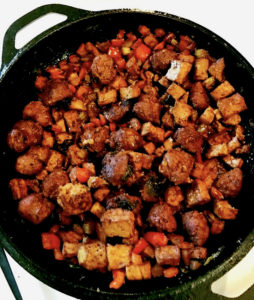 Stir fries are great ways to extend your meat budget and exercise portion control. This dish is made with 3/4-pound of a Korean-style sausage from Chicago’s The Butcher & Larder at Local Foods, a pound of fried firm tofu from Chicago’s Phoenix Bean (a graduate of the first cohort in FamilyFarmed’s Good Food Business Accelerator), red bell pepper, celery, and bottled stir fry sauce created by Chicago chef Bill Kim. Photo: Bob Benenson/FamilyFarmed

“You can roast a whole chicken, generously turn that into two meals, and then you can take the bones and the leftovers and make that into stock for soup or whatever,” Levitt said. “One of my favorite things that my wife does when we have company over is I’ll bring home some stewing meat or some pot roast, and I’ll make this nice rich saucy pot roast with lots of vegetables, and we’ll have a great meal and maybe we’ll have leftovers the next day. But if there are still leftovers, she’ll take the stew and she’ll shred up the pot roast and she’ll have me bring home a quart of stock and she’ll thin it out, she’ll add some wild rice, barley or something, and then that stew that we’ve eaten twice now has become beef and barley soup. We’ll have four, five quarts of it that we’ll pack up and put in our freezer, and that one meal, with just a tiny bit of extra work becomes like six dinners. It’s delicious.”

The rising interest among consumers in Good Meat has been abetted by the fact that many in the science and medical community have backed off on a decades-long campaign that said eating meat (especially red meat) and animal fats is dangerous.

He continued, “But it always comes back to what Julia Child said, ‘Everything in moderation.’ You can eat all the meat you want, just eat small portions of it and don’t do it every day.” 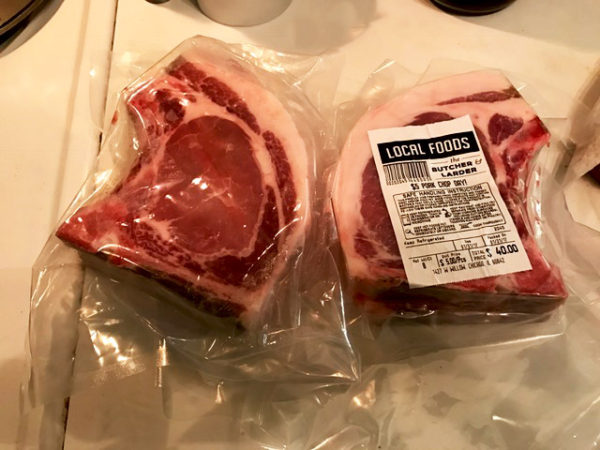