Any list of hot commodities in Chicago would have to include the Chicago Cubs, who last year won baseball’s World Series for the first time in 108 years; a world-renowned restaurant community, driven largely by chefs who believe in Good Food movement principles and community engagement; and a craft beer scene that has boomed just within the past few years.

So it wasn’t a coincidence that the first major event held at The Park at Wrigley — the new event space built by the team owners right next to historic 103-year-old Wrigley Field — was called Craft and Cuisine, featuring chef demos, food stands representing some of the city’s top restaurants, and several leading Chicago breweries. The event held Saturday (May 13) drew hundreds of attendees who enjoyed delicious food, beer and wine, and one of the first truly beautiful spring days this year. 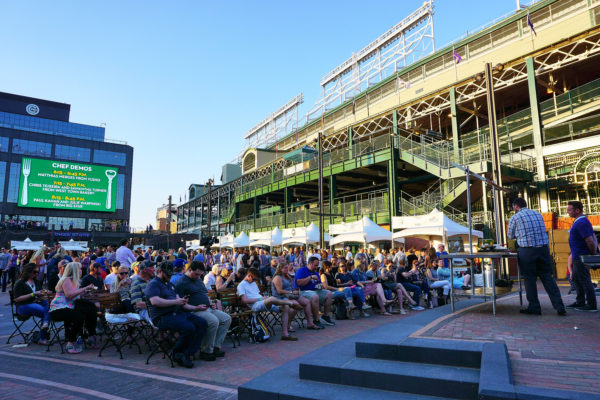 The new Park at Wrigley, a public event space, is located at the northwest corner of Wrigley Field and adjacent to the Chicago Cubs’ new office building. Photo: Bob Benenson/FamilyFarmed

It might have been an indulgence for FamilyFarmed to attend this event were it not for the Good Food cred of many of its participants. Three of the chefs doing demos also were featured at the Frontera 30th Anniversary Celebration on April 30, which raised more than $100,000 for Chef Rick Bayless‘ Frontera Farmer Foundation and FamilyFarmed: Stephanie Izard (Girl & The Goat, Little Goat Diner, Duck Duck Goat), Paul Kahan of the extensive One Off Hospitality Group (Blackbird, avec, The Publican, Nico Osteria and more), and Matthias Merges of Folkart Restaurant Management (Yusho, Billy Sunday, A10 and Old Irving Brewing).

Paul and Matthias, along with their dedication to sourcing from local farmers, are co-founders of Pilot Light, a nonprofit program that works with Chicago Public Schools to integrate food education into students’ curriculum. 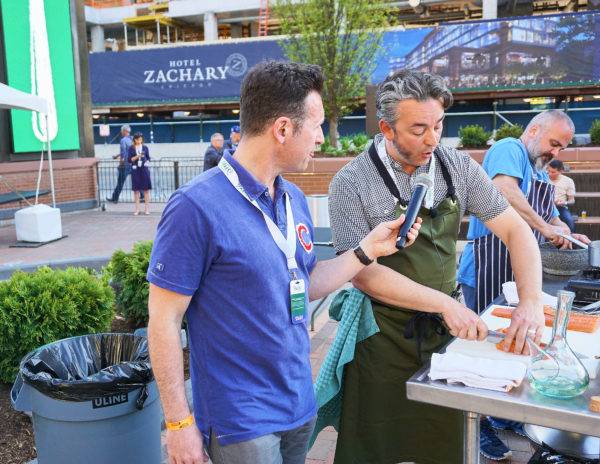 Chef Matthias Merges prepares salmon for poke, a raw fish dish from Hawaii that is rapidly gaining in popularity in Chicago, at the Craft and Cuisine event. Steve Dolinsky (left), who emceed the event, is a food journalist for Chicago’s ABC-TV affiliate and co-hosts The Feed podcast with Chef Rick Bayless.Photo: Bob Benenson/FamilyFarmed

Many of the beermeisters engaged in the Craft and Cuisine event also are connected to the Good Food movement. Begyle Brewing, located about a mile from the park, has sampled its product at several FamilyFarmed events since its founding five years ago, and co-founder Kevin Cary is the current president of the Illinois Craft Brewers Guild. Jared Rouben, the founder and head brewer at Moody Tongue in Pilsen on Chicago’s South Side, is well-known for the culinary sensibility he applies to beer and has close ties to Green City Market, the city’s premier farmers market.

Green City, in fact, is a catalyst in The Park at Wrigley’s ongoing engagement with Good Food. The market, whose main location is in Chicago’s Lincoln Park, will have a satellite operation between June 15 and the end of October on Thursday evenings (4-8 p.m.) when the Cubs are not playing at home. (The full schedule can be found by clicking here.) 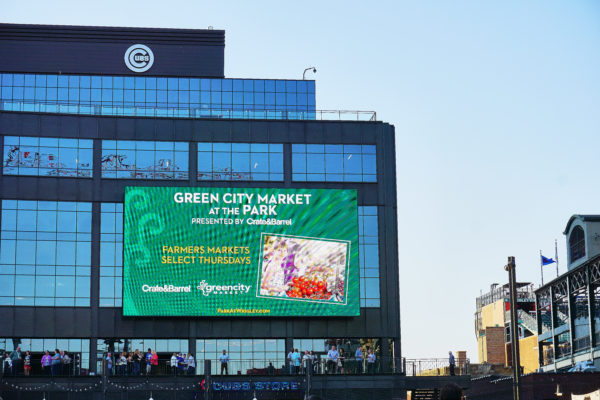 The big screen on the side of the Chicago Cubs new office building promoting the Green City Market’s upcoming Thursday farmers market nights at The Park at Wrigley. The first market night is scheduled for June 15. Photo: Bob Benenson/FamilyFarmed

“We developed the Park at Wrigley with the vision to enrich and expand the neighborhood experience. The idea was to create a place where families, fans and visitors could come to enjoy Wrigleyville year-round,” said Eric Nordness, vice president and CFO of Hickory Street Capital, the real estate development company owned by the Ricketts family (also owners of the Cubs and Wrigley Field) that designed and built the Park at Wrigley.

He added, “Starting with today’s Craft and Cuisine, which has brought together some of Chicago’s top chefs and breweries, the Park at Wrigley will be instrumental in hosting farmers markets, movie nights and an ice rink. Wrigleyville, which was primarily a destination for game days, is now a dynamic location that offers entertainment, unique food options, and daily attractions. We are excited with this new opportunity to build on the legacy of Wrigleyville.” 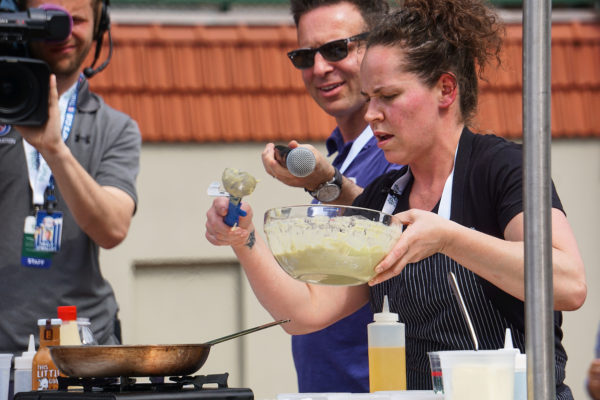 At the Craft and Cuisine event at The Park on Wrigley, Stephanie Izard — a James Beard Award-winning Chicago chef — prepares okonomiyaki, a savory Japanese pancake that is a menu fixture at her Little Goat Diner. Photo: Bob Benenson/FamilyFarmed

The Park at Wrigley is part of a major transformation of the Lakeview community, known as Wrigleyville, that surrounds the historic ballpark, and food is playing a major role. The Zachary, a hotel rising across Clark Street, will include a new outlet for Matthias Merges’ Billy Sunday, located in Chicago’s Logan Square neighborhood, and a new location of Paul Kahan’s Big Star taco restaurant, located in the Wicker Park neighborhood (Big Star chef de cuisine Julie Warpinski participated with Paul in the Craft and Cuisine chef demo). Two other chefs who participated in Saturday’s event will have restaurants in the hotel: Derek Rettell of Smoke Daddy barbecue and Chris Teixeira of West Town Bakery.

Not waiting til next year, Matthias Merges this summer will open Lucky Dorr, a craft beer-centric restaurant, in the Cubs’ new office building located at the north end of The Park at Wrigley. 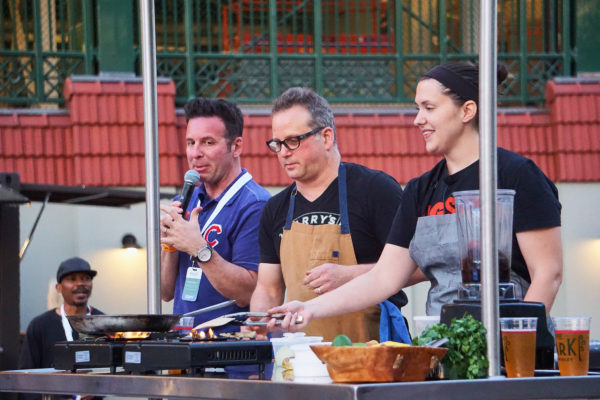 Paul Kahan (center) of Chicago’s One Off Hospitality and Julie Warpinski of the group’s Big Star restaurant prepare mole poblano tacos at the Craft and Cuisine event May 13 at The Park at Wrigley. Photo: Bob Benenson/FamilyFarmed

There is no such thing as too much Good Food, and The Park at Wrigley has wasted no time in establishing itself as part of our fast-growing community. 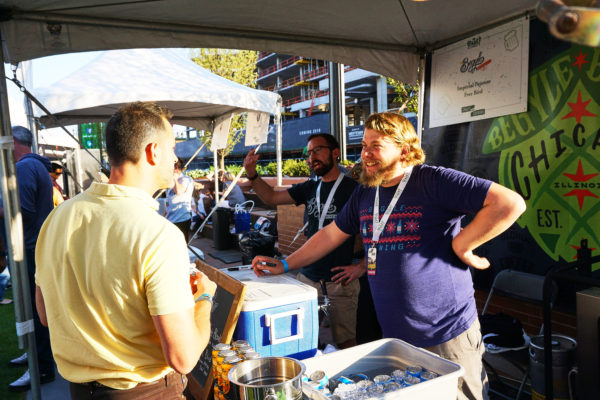 Begyle Brewing, a member of Chicago’s burgeoning craft beer sector, participated in the Craft and Cuisine event at The Park at Wrigley. Co-owner Kevin Cary (right) is the current president of the Illinois Craft Brewers Guild. Photo: Bob Benenson/FamilyFarmed 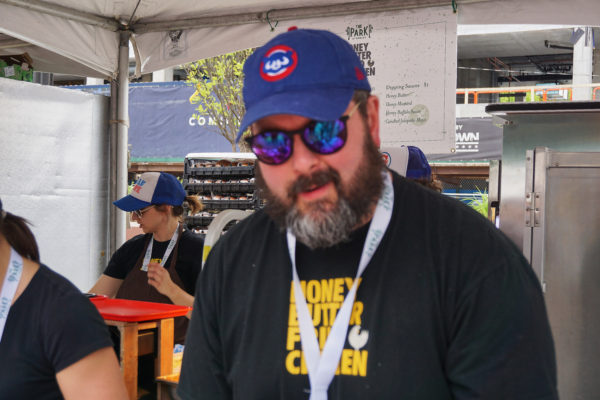 Honey Butter Fried Chicken was one of the food providers for the Craft and Cuisine event at The Park at Wrigley. Co-owners Josh Kulp (foreground) and Christine Cikowski (background) receive the Good Food Chef of the Year Award at FamilyFarmed’s Good Food Festival in March for their delicious food and social mission. Photo: Bob Benenson/FamilyFarmed 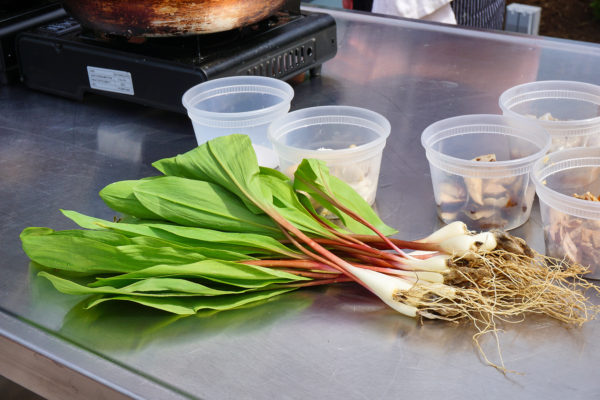 Chef Stephanie Izard’s okonomiyaki preparation at Craft and Cuisine included ramps, a wild-growing onion whose brief season heralds the arrival of spring in the Chicago region. Chicago derives its name from the American Indian word for ramps, which is sometimes translated as “stinky onion.” Photo: Bob Benenson/FamilyFarmed