The New York Times’ Mark Bittman — one of the leading journalists in the Good Food space — made an important point in his column marking National Farmers Market Week. While prices at the thousands of farmers markets across the nation may be generally higher than at national discount supermarket chains, a savvy shopper can find producers selling superior products at bargain prices. 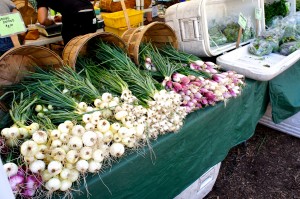 The number of farmers markets in the U.S. has topped 8,000 — more than double the number 10 years earlier and better than a four-fold increase over 20 years. Photo credit: Bob Benenson

“At the 37-year-old market on 175th Street in Washington Heights [in Manhattan], I found purslane — a salad green I’ve been foraging for 40 years, and that I adore — and bought a bunch as big as my head for $2,” Bittman wrote in his column Farmers Market Values published by the Times on Aug. 5.  “I found papalo (also called Bolivian coriander), a delicious, strong-tasting green I’ve bought every time I’ve seen it since I first tasted it in Mexico a few years ago.”

He continued, “And at the tiny farmers’ market in Truro, on Cape Cod, now in its second year, I bought lobsters for 40 percent less than they cost in local stores, pork jowls for $2 a pound, and gorgeous half-yellow, half-green summer squash for a dollar each; they were worth it.”

Are you seeing great prices or great values at farmers market (or farm stands) wherever you are? Please share them with us by commenting below. I am going to do another round of bargain hunting this weekend, and plan to post another story (with lovely photos) on Monday. We would love to include your tips in the piece.

1 thought on “Farmers Market Benefits Include Bargains — Tell Us Yours”