The rising interest in heirloom (or heritage) varieties of food — and the important role that popcorn producers such as Iowa’s Tiny But Mighty have played in that trend — has caught the eye of The New York Times. 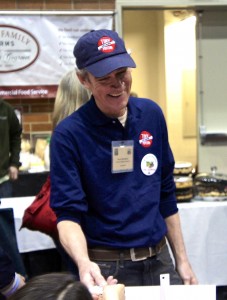 A story by Times reporter Kim Severson, titled “Heirloom Popcorn Helps a Snack Reinvent Itself,” is datelined Shellsburg, Iowa. This town, near Cedar Rapids, is home to the farm where Gene and Lynn Mealhow grow the tiny ears of corn that go into their product. Noting that the seed stock goes back to before the 1850s, Severson wrote, “The small, pearly flint corn has never been genetically modified or hybridized. Its only purpose is to pop into small, crisp puffs that taste of pure toasted corn.”

Severson noted that Gene Mealhow spent years driving around the Midwest seeking buyers for his popcorn, then added, “Now, his Tiny but Mighty brand is on the shelves of Whole Foods. For a family like his, that’s akin to winning the lottery.” After establishing the market for its raw kernels for stovetop popping and bags of already popped corn, Tiny But Mighty is rolling out a microwave version soon.

Tiny But Mighty has a long and close relationship with FamilyFarmed, the non-profit Good Food movement advocacy organization that publishes Good Food on Every Table. The company has been a regular participant in FamilyFarmed’s Good Food Trade Show and Festival, held each March in Chicago. FamilyFarmed President Jim Slama helped the Mealhows develop their business plan and get financed.

Gene Mealhow is one of the featured speakers at an event tonight (Oct. 1) highlighting FamilyFarmed’s new Good Food Business Accelerator, which will provide mentoring, technical and networking support to selected Fellows who have promising entrepreneurial concepts. Tiny But Mighty also will be among the vendors providing samples of their products at this Accelerating Good Food event, which will take place in Chicago’s Merchandise Mart at 1871, the business incubator that hosts the Good Food Business Accelerator.

FamilyFarmed also introduced the owners to Kevin Sabo, then a student at the University of Chicago Booth School of Business and a FamilyFarmed volunteer. Sabo who now holds the position of Tiny but Mighty’s Chief Poperating Officer and has been a key factor in their success.