One of Wilhelms’ inspirations for the company was Frank Morgan, who was a pioneer in raising open-range, grass-fed beef for the populous Chicago market nearby. Wilhelms produced a well-regarded short film titled A Chicago Ranch, which won the “Made in Chicago Award” at the 2014 Chicago Food Film Festival and continues in circulation.

Morgan died suddenly shortly before its release in early 2012. In the column below, Wilhelms recalls his relationship with the taciturn but likable rancher and leader of the Chicago region’s local sustainable ranching community.

[Wilhelms’ Red Meat Market has become a regular participant in FamilyFarmed‘s annual Good Food Festival & Conference, and is a sponsor of this year’s event scheduled for March 19-21 at the UIC Forum on the University of Illinois at Chicago campus. Look for Red Meat Market’s display in the Exhibit Hall. For more information about the Good Food Festival & Conference and to buy tickets, please visit the event website.]

Frank Morgan was a man’s man, but also a big kid in a short body. He looked and acted like John Wayne, but was a bit funnier, and also two feet shorter. Always neatly shaved, wearing a expensive cowboy hat, he walked and talked like a cowboy. He ate biscuits and bacon with coffee every morning and, as commodity trader, traded corn futures during breakfast, then turned his attentions to his ranching.

You would not be blamed if you thought I was describing a cattleman from Wyoming or Texas. But Frank was actually a pioneer in raising local, grass-fed beef for the mass market in Chicago, not far from his Q7 Ranch in the north-central Illinois town of Marengo. 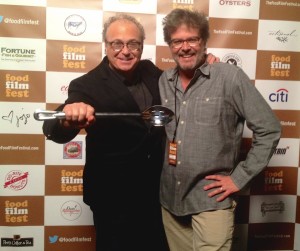 Mark Wilhelms (left) celebrates his 2014 “Made in Chicago” trophy for his short film A Chicago Ranch with George Motz, co-founder and director of the Chicago Food Film Festival.

I got to know Frank well, especially as I produced a short film titled A Chicago Ranch about his operation. Sadly, Frank — an American original if ever there was one — died suddenly at age 59 in January 2012, just weeks before the movie was completed. But his work inspired me to start Red Meat Market, our online sustainably produced meat retailer, and I pay tribute to him by showing the movie at food film festivals.

First time I saw Frank, he was sitting on a palamino horse, smoking a cigarette and impatiently waiting for us city slickers to show up. He had invited us to gather cattle one Saturday morning.

When we showed up late with our horses, he didn’t say a word. He just waited for us, politely, to saddle up. When we did, he explained what we were going to do that day: He split us off into three groups to sort cattle out of the thickets and lowland. My team was led by another cowboy, Gene Green, an expert farrier and roper who Frank knew well. Frank gave the orders to meet at a spot beyond the woods at the bottom of the far pasture with whatever cattle we could push out. That was it and we all rode off.

I didn’t talk with Frank that entire day until the end, when the steers were sorted out for market and the rest of the herd sent back to graze. He came over to my group, extended his hand to each of us, and said, “Thank you, you are welcome back anytime. ” That was it.

We reconnected a few weeks later when he asked me to give him some professional advice about digital marketing his products. So I went out to the Q7. He had said, “Wear your jeans and bring a hat. We’ll go for a ride,” so I did. I put on an old cowboy hat and went out there.

Now the first time Frank met you, he took all but three seconds to size you up with his steel-blue eyes. He’d shake your hand, introduce himself politely, and welcome you to the ranch. Then he would turn away and start walking. That would be the most he would say to you unless you asked him questions.

That’s how it went during my first visit. But after he studied my outfit on my return visit, he was blunt. He said, “You need a new hat.” I said, “I do, why?” I guess it had too much “Native American Bling” on it.

He went in the house and gave me one of his old ones to wear. This was great but it was too big and I had to keep holding on to it while we rode. Very city slicker and embarrassing.

Frank expected nothing from you except to be polite and ask questions. This is the cowboy way, I guess. It’s gentleman-like. I’ve been on cattle drives in Wyoming and such places with real cowboys and they are mostly like that. They don’t speak much when they are working unless you are about to screw up. If you did screw up, you wouldn’t hear a word. They rely on honestly and integrity.

Like other cowboys, Frank would give his opinion on any subject when asked, but not force it upon anyone. After you saddled up the horses at the ranch, he would just ride off and you were expected to do the same. Watch, follow, and learn. 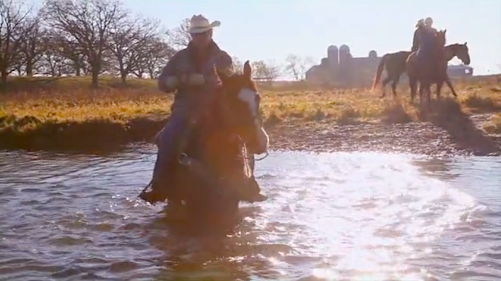 Screen shot from the short film A Chicago Ranch, produced by Mark Wilhelms, the author of this article.

On occasion, the ride would be just riding, not pushing cattle and just checking fence lines. These were some of the best times I had with Frank.

When we were working cattle, he would test your “grit” and send you off to gather steers out at the far end of a pasture, by yourself, to see what you were made of. This happened my first day and times after. There was no discussion. You just had to cowboy-up and do it. Cross a river, cut through some bramble, and ease up on the herd to start working the cattle. You had to criss-cross and “punch” stray steers back into the herd, but after a while the cattle knew what to do.

Though I had that limited experience on drives out west, the horse Frank gave me knew more about it than I did, so it went well. I loved it, even though Frank never said a word of compliment. He did tell me that I didn’t have to move the animals that fast — he didn’t want to run the weight off them!As with most cowboys, there was no gray area for Frank like we see in downtown business. Frank would say that there was no room for bullcrap [okay, he used the more colorful version of that word], only bourbon. There was either a right way or a wrong way when ranching. Doing things the wrong way will get you hurt or worse the cattle hurt OR, even worse, his horses hurt.

Frank was such a great leader in sustainable farming, apart from being a great guy to hang out with. It was important for me to share that part of him in the film that was one of his lasting legacies.