Julia McDonald and her husband Todd McDonald own Peasants’ Plot, a Community Supported Agriculture (CSA) farm in Manteno, Illinois that grows produce sustainably and sells it to subscribing consumers. In her contributed column, McDonald describes the rise of the CSA concept and its still yet-to-be-tapped potential; the emergence of the CSA coalition known as Band of Farmers; and the group’s upcoming talent show in Chicago on March 28.

First thing’s first: For anyone who does not yet know what CSA means, let’s catch you up. CSA is a model of agriculture in which local farmers provide their produce (or protein!) to subscribers whose support pays for seed and labor prior to growing season. 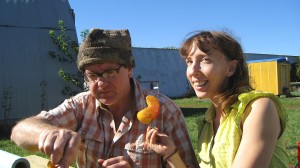 Farmers who run CSA programs are of a whole different breed. I can say this because I am a CSA farmer. My husband is. Many of the best people I know are CSA farmers. So let me tell you a little bit about them:  They are geniuses.

CSA farmers all toil in the typical ways farmers toil (sun, early hours, long hours, dirt under our nails). We also toil in atypical ways. When the average person thinks “farmer,” most would not conjure the image of someone at a computer running a Kickstarter campaign, or a farmer silhouetted against his field typing into a smartphone. How many people associate farmers with Facebook posts or spreadsheets or yoga events or talent shows?

Today, growing vegetables is not the only work of a farmer. It is just one job among the many other jobs associated with a small business, including but not limited to marketing, education, awareness, community-building. Events. Blogs. T-shirts. Guitars.

The truth of it is that much of my job feels like grass-roots activism instead of a small for-profit enterprise. Some may say that’s bad business. I say it’s exciting. After all, why we did we get into this in the first place? Why CSA?

The rise of this new model of agriculture came partially as a response to a rise in industrial farming and the opening of global trade that pressures companies to source from all over the world. Documentaries such as Food Inc. and others have spiked a concern over GMOs and the conditions under which food is produced: pesticides, labor conditions, animal conditions, etc.

These are legitimate concerns, so that’s why people have started to care. They ask the important question: Where is my food coming from? The CSA experience/relationship is an effort to put people back into the picture of food production by building community.

When my farm in Manteno, Illinois began in 2007, my husband Todd and I were meeting a demand — and joining a movement for more control over our country’s food choices. People were clamoring for more CSA farms.

In the eight years since, CSA farms have increased in number, but the consumer base plateaued.  To get an idea of the growth potential that fuels us:

The Madison, Wisconsin, metropolitan area ranks as a virtual hotbed of CSA activity. It has a population of approximately 600,000, and CSA farmers there serve 9,500 households, according to FairShare CSA Coalition’s  2013 Annual Report.

The Chicago metropolitan area, by comparison, has a population of approximately 9,000,000 and serves roughly the same number of households (based on an average of 100 households per CSA multiplied by 80-90 CSA farms serving Chicagoland).

So there is a lot of room to grow, Chicago!  Your farmers are up and running, and there’s a lot of local food to eat.

The Creation of Band of Farmers

The history of the Band of Farmers group illustrates the collaborative spirit of CSA. It is our formal coalition, in partnership with the Illinois Stewardship Alliance, with aims to promote the CSA model through consumer education and other opportunities.

The Band of Farmers website, newly live, is a place where consumers can now go for quick answers about Community Supported Agriculture. Together we see a bright future that includes a searchable directory of farms (expanding every day!), collaborative events, educational outreach, cooperation with health insurance companies, and much more.

We see future CSA farming as so tightly integrated into this country’s culture that the question “Who’s your CSA?” is heard all over, by people for all walks of life who care deeply about what they are eating and where it came from.

So what’s all this about a Talent Show?

Please join us in celebration at The Third Annual CSA Farmer Talent Show on Saturday, March 28 at The Hideout in Chicago.

See us as farmers and as people, dancers, singers, poets, jugglers. But mostly farmers.

For those attending FamilyFarmed‘s Good Food Festival & Conference, we have a special discount for you!  Bring your Good Food Fest ticket stub to the CSA Farmer Talent Show and get in for just $5 (tickets are normally $15.) More details can be found on our Facebook page or at www.bandoffarmers.org.

And if you are going to Good Food Festival & Conference, please stop by and visit the CSA Pavilion in the Exhibit Hall. Jody Osmund of Cedar Valley Sustainable Farm in Ottawa, Illinois, also will be representing Band of Farmers at the Opening Symposium for the Good Food Festival & Conference’s Trade Day on Friday, March 20. (To learn more about the overall program for Trade Day, please click here.) 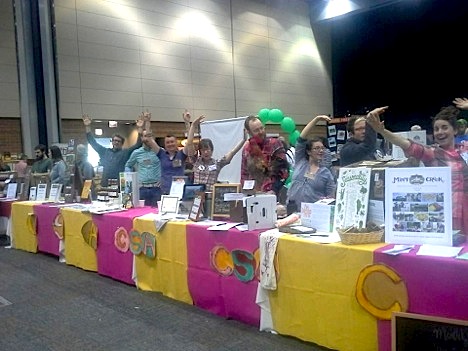