The term “farm-to-table” came into vogue as the rising Good Food movement prompted restaurateurs and chefs to seek out locally and regionally produced ingredients to serve to their diners. It might seem the term would naturally apply to Farmhouse Tavern, which, after all, has the word “farm” right in its name. 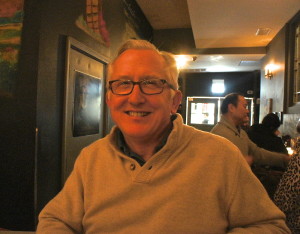 But T.J. Callahan, the founder and co-owner of the Farmhouse Tavern restaurants in downtown Chicago and suburban Evanston, is a bit wary of the “farm to table” label, which some critics say has been overused to the point of becoming a cliche. “Farm to table, it’s such a nebulous kind of concept,” Callahan said in an interview with Good Food on Every Table. “So we’ve called ourself, from day one, a ‘Midwestern craft tavern.'”

Yet Farmhouse Tavern’s Good Food roots are deep, and that makes it no surprise that the outfit has struck up a strong relationship with FamilyFarmed, a Chicago-based nonprofit that promotes the Good Food movement. Farmhouse will be a presence at this week’s Good Food Festival & Conference staged by FamilyFarmed, which runs Thursday through Saturday at UIC Forum on the University of Illinois at Chicago campus.

Callahan will pitch his business expansion plans to investors, financiers, and lenders during the Good Food Financing & Innovation Conference that kicks off the event on Thursday. Farmhouse Tavern also will present the craft beverage reception that will close that day’s program.

Farmhouse Tavern also will have a high profile at the two biggest segments that are designed for the general public. Chef Eric Mansavage will be on hand on Friday evening at Localicious — one of Chicago’s premier annual food and drink tasting events — to serve up some of Farmhouse’s popular Wisconsin beer-battered cheese curds. Then Farmhouse will run the first-ever Craft Drink Corner that will sell beer and cider at the Good Food Festival, the big public celebration of the Good Food movement that closes the three-day Good Food Festival & Conference.

[To learn more and to buy tickets, please visit the event website.]

The approach that Farmhouse takes is very much at home at the Good Food Festival. “To the greatest extent possible, everything we put on our menu is sustainably raised, humanely treated, antibiotic and hormone free, organic when we can, from farmers we can identify, we know who they are, we know where the product came from, we visit the farm,” Callahan said.

Farmhouse is very specific about what it means by local sourcing, seeking as many of its ingredients as practicable from the states that surround Lake Michigan. “What we do at Farmhouse is about having a sense of place. Farmhouse is all about the Midwest. We define ourselves as Illinois, Indiana, Wisconsin and Michigan,” Callahan said. 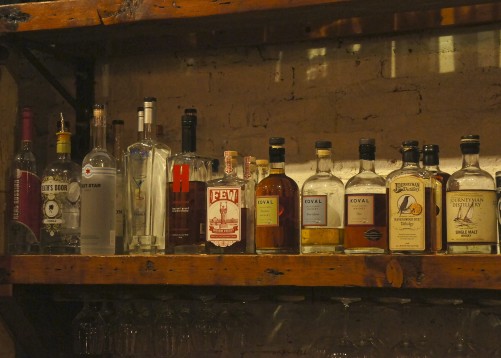 The reference to cider in Callahan’s statement was deliberate. Farmhouse Tavern was quick to catch on to a recent fast rise in interest about hard cider — which long reigned as early America’s native and most popular alcoholic beverage — a phenomenon underscored by events such as the Cider Summit, which drew big crowds to the massive ballroom at the end of Chicago’s Navy Pier on Feb. 7. 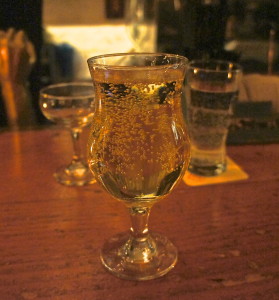 Tell William, released in early February 2015, was the first house cider released by Farmhouse Tavern in Chicago and Evanston

And after installing a variety of ciders as fixtures on its beverage menu, Farmhouse went the next step recently and starting producing its own line of ciders that are more dry than sweet, modeled after those long produced in traditional cider regions of Europe (such as England, the Normandy region of France and the Asturia region of Spain) .

In fact, Callahan and his wife — city dwellers — bought farmland in Mineral Point, a community located in southwest Wisconsin about a three-hour drive from Chicago, and have planted dozens of trees to grow cider apples as well as other varieties. In the meantime, he is purchasing apples for Farmhouse’s cider from a nearby orchard named, appropriately, The Cider Farm.

Callahan compared learning the basics of farming in a short period of time to “drinking from a firehose,” and says his networking efforts include a membership in the Midwest Organic Fruit Growers Association.

He also has been working to refine a concept for a new cider-themed establishment in downtown Chicago. After shelving an original concept for a restaurant that would have paired top ciders from U.S. and international cider centers with food from those regions, Callahan is now focusing on a project to build a cidery where the beverage would be produced right in the city.

“I’ll be pitching at the Good Food Festival on this,” he said. “We’re really excited about doing something with cider.”

Callahan said Farmhouse likely will have some of its cider on hand at the Good Food Festival’s Craft Drink Corner, along with beers from the area’s burgeoning craft brewery sector.