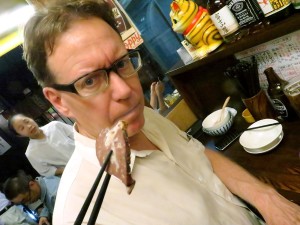 Nicholas Vroman, the author of this article, sampling the local fare in Japan, where he currently resides when not volunteering for the Good Food Festival in Chicago

Nicholas Vroman is a freelance writer. His article focuses on SLoFIG, a Chicago investment group that focuses on startup businesses in the Good Food sector. SLoFIG is now a veteran participant in FamilyFarmed’s Good Food Financing & Innovation Conference, which this year takes place on Thursday, March 19, and takes up the first day of the 11th annual Good Food Festival & Conference that runs March 19-21 at Chicago’s UIC Forum.

See the end note for details about SLoFIG’s participation in the Conference. For more information about the Good Food Festival & Conference and to buy tickets, please visit the event website.

Let’s say you have a small startup business in the Good Food sector. You’ve already mortgaged the house, not taken real salary for a long time, and have asked about as much as you can ask from family and friends. But you have a pretty good idea what you have to do next to make your sustainable food business sustainable as a business.

Where do you go for the cash you’ll need, the investment that may well determine if your business will flourish or fail? You can try banks and other conventional lenders, but even in an economy that has rebounded from the Great Recession, there is still plenty of risk aversion about lending serious capital to unproven entrepreneurial businesses.

This has been one of the major dilemmas that many startups (and even some better-established players) face in the fast-growing Good Food movement. New companies with new models of business and products, seeking their footing in a rapidly developing business landscape, need new models of investment and finance.

Fortunately, the money gap is starting to be filled by venture capital groups that see the business potential in the Good Food movement and are focusing their investment efforts in this sector. Chicago’s SLoFIG, an acronym for Sustainable LOcal Food Investment Group, was one of the first to see — and seize — the opportunity. 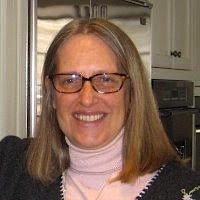 Teri Lowinger, one of SLoFIG’s founding members, explained how it took shape just five years ago. “Karen Lehman’s funding collaborative Fresh Taste brought people together to talk about how to get funding into the Good Food system,” Lowinger said. “And several of us met over the course of a year in several different venues, several different meetings to talk about what could be done. At one point, she brought in Woody Tasch, who wrote the book Slow Money, and he talked to us. He’s very inspiring, got everyone into it, what we could do.”

She continued, “At the same time, I happened to be invited to a meeting of Hyde Park Angels, a local angel investment group. It’s mostly focused on tech, business services, financial services, different kinds of businesses… But I thought that model would be perfect for forming a group of angel investors to invest in food. So we used the same structure basically.”

Lowinger said Lehman brought together several members of the group she had created to start SLoFIG. The group — which has become a regular participant in FamilyFarmed’s Good Food Financing & Innovation Conference, which takes place on Thursday, March 19 this year — got its first public exposure in 2011 at FamilyFarmed’s Good Food Festival & Conference. “We ran a business plan competition,” Lowinger said. “Seventeen businesses applied, and that was really the beginning of SLoFIG.”

SLoFIG has since funded several businesses, a couple of restaurants (including the highly regarded Nellcôte on Restaurant Row in Chicago’s West Loop neighborhood), and more.

One relationship that has stemmed directly from SLoFIG’s work with FamilyFarmed is with the Sugar Beet Co-op, which made a business pitch at the Good Food Financing & Innovation Conference’s Financing Fair in 2013 and exhibited at the event in 2014. 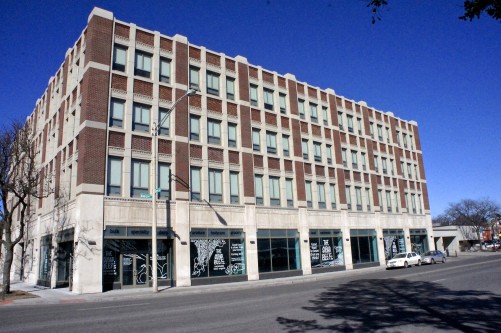 Sugar Beet Co-op, which received investment capital from the SLoFIG group, is building its retail market on the ground level of this architecturally significant 1920s building in the Chicago suburb of Oak Park

Sugar Beet, which has received investment capital through SLoFIG, is building a retail market in the Chicago suburb of Oak Park that is scheduled to open this spring. SLoFIG has also provided financing for Chicago Market, another food co-op planned for Chicago’s North Side that currently is in its development stage. 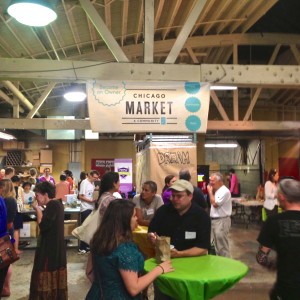 Chicago Market, a food co-op in which the SLoFIG group has invested, launched its ownership drive at an event in Chicago’s Andersonville neighborhood in June 2014

[Sugar Beet and Chicago Market are founding members of the Chicagoland Food Co-op Coalition, which will be a major participant in the Community section of the Good Food Commons at FamilyFarmed’s Good Food Festival on Saturday, March 21. Cheryl Muñoz of the Sugar Beet also will participate in a panel discussion on The Future of Food at the Festival. To read more about the Co-0p Coalition, click here.]

Though influenced by Tasch’s seminal work on investing in Good Food, SLoFIG looks at investment a bit differently. While Tasch suggests that investors who put their money into Good Food businesses should expect a slower return than they would anticipate from other investments, Lowinger said, “We are not a Slow Money group. Our view is if the business is economically sustainable, it’s a good choice. So we don’t want to invest in businesses with unsustainable financial models. We want our investments to succeed so we want businesses that are sustainable. We all benefit.”

There are now 25 members of SLoFIG, investors with different interests and skill sets. The unifying factor, said Lowinger: “We care about food.” And because its members care about food, they work to level a playing field that for many years has been tilted in favor of the industrialized commercial food sector and against the local and sustainable food sector.

“The incentives are stacked against businesses in this sector,” Lowinger said. “They go mostly to businesses that produce things we don’t want to eat. The ones producing Good Food don’t get the support they need. I mean, it’s hard for a lot of these businesses.”

SLoFIG has a committee process for screening its now-numerous applicants, but the key to making deals is having one of the group’s members become an advocate of one of these entrepreneurial businesses. “We still need someone to step up and say I’ll be the deal-maker,” she said. “Not only are they going to gather up our members to make something happen, but they’ll be the main communicators.”

SLoFIG members are attracted to particular businesses for a variety of reasons. Lowinger said: “Some of of us think food justice is more important. Some people think the sustainable organic aspect is most important. We all have a different vision of what’s important. So, it’s up to each of us to decide which ones we want to invest in.”

While SLoFIG has been around only a few years, its diligent processes, smart investment planning, and growing knowledge base is producing investment models and helping Good Food businesses become stronger and enduring.

Lowinger concluded, “We’re really proud of all the knowledge of our investors. At this point, we’ve looked at 99 businesses all along the food chain, businesses in farming and urban ag, processing, aggregation, and distribution to package goods, caterers, restaurants. We’re gaining a pretty strong base of knowledge, not only of the industry itself, but of local foodstuffs… I think we have more knowledge at this point than most people. And we have a wide variety of members that provide, really, resources for companies that need us.”

SLoFIG will have a major presence, as it has for the past few years, at FamilyFarmed’s Good Food Financing & Innovation Conference, which takes place Thursday, March 19 at the UIC Forum on the University of Illinois at Chicago campus.

Lowinger will represent SLoFIG as a member of the the panel “Good Food is a Good Investment,” which takes place from 4-5 p.m. at the Conference. The panel, moderated by Greg Christoff of Abbey/APCI Investments, will also include introductions by Lauren Rosenthal, another SLoFIG member and a member of the FamilyFarmed board of directors, and the other participants: Dave Miller of Iroquois Valley Farms; Bram Bluestein of Bluestein & Associates; Robert Dow of Graystone Consulting, a division of Morgan Stanley; Andy Whitman of 2X Consumer Growth Partners, and Brian Smith of the Freeborn & Peters law firm and The Angel Food Network.

The Good Food Financing & Innovation Conference is the kickoff event for the three-day 11th annual Good Food Festival & Conference, which runs from March 19-21 at the UIC Forum. For more information and to buy tickets, please visit the event website.