Chicago chef Paul Kahan has long been known for the culinary excellence of the successful and high-profile restaurants in the One Off Hospitality Group, currently at eight locations and growing.

His kitchen mastery earned him the James Beard Foundation (JBF) Outstanding Chef Award in 2013. He was inducted into JBF’s Who’s Who of Food and Beverage in America the next year. And Donnie Madia, a business partner at One Off, won the JBF Restaurateur of the Year Award in 2015, when the awards ceremony was staged in their hometown of Chicago for the first time. Kahan served as co-chairman of those James Beard Foundation Awards with Rick Bayless of the Frontera group and Grant Achatz of Alinea.

Underpinning the quality of Kahan’s cuisine is his longtime dedication to sourcing sustainably produced ingredients, as locally as possible, for his restaurants’ kitchens. This made Kahan a natural ally of FamilyFarmed in its efforts to advance the Good Food movement. He made the keynote speech at the organization’s first trade show in 2004, which evolved into the annual three-day Good Food Festival & Conference in Chicago.

So FamilyFarmed is honored to welcome Kahan back to the Good Food Festival on Saturday, March 26 to receive its Good Food Chef of the Year Award. As a bonus, Kahan will participate in a family-friendly cooking demonstration — along with chefs Christine Cikowski and Josh Kulp of Honey Butter Fried Chicken and Sunday Dinner Club — in support of Pilot Light, a nonprofit organization Kahan co-founded, in which chefs work with Chicago Public Schools to integrate food education into students’ curriculum. 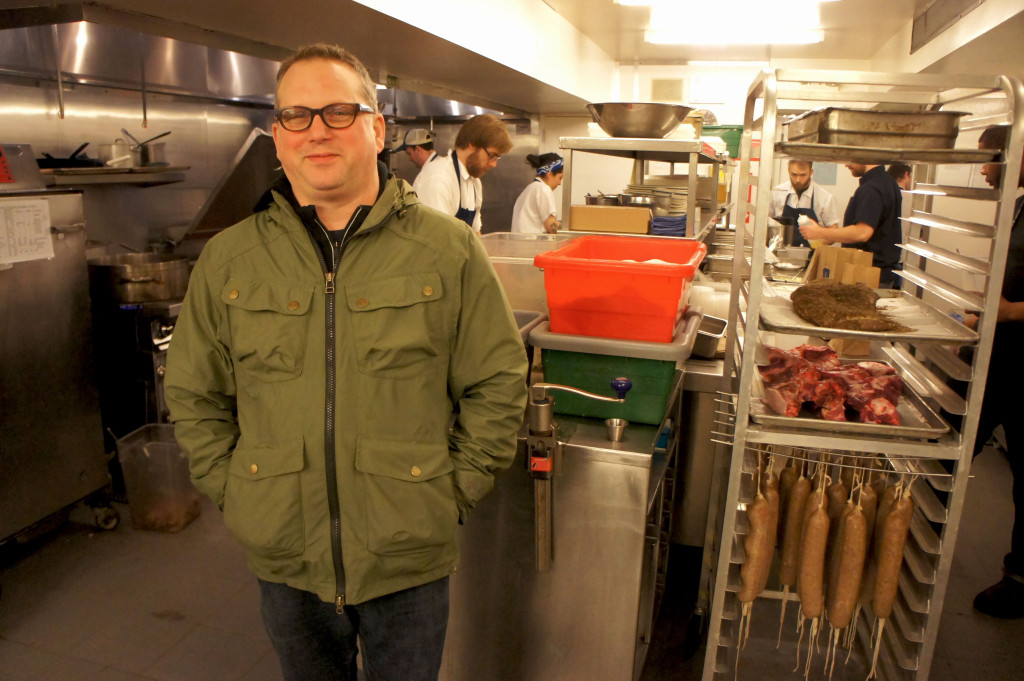 Award-winning Chicago chef Paul Kahan in the busy kitchen and butcher shop of Publican Quality Meats, one of eight establishments currently run by his One Off Hospitality Group. Kahan will receive FamilyFarmed’s Good Food Chef of the Year Award for his dedication to local sourcing and sustainability at the Good Food Festival on March 26. Photo: Bob Benenson/FamilyFarmed

Kahan’s restaurant group currently consists of Blackbird (the first restaurant he opened, in 1998), Avec, The Publican, Publican Quality Meats and Publican Quality Breads in the West Loop neighborhood, Nico Osteria in the downtown Gold Coast, and three locations in the Wicker Park neighborhood: the Big Star taco restaurant, neighboring Dove’s Luncheonette, and The Violet Hour, a speakeasy-style bar/restaurant that helped inspire the mixology trend in Chicago.

Kahan says more places are in the works: another restaurant to be named in Wicker Park and Publican Tavern at O’Hare International Airport. Plans for expanding Avec, a highly regarded small-plates restaurant, also are under way.

Underscoring the economic potency of Good Food, Kahan says his businesses have a combined total of more than 800 employees, which will rise to more than 1,000 when the new locations open this year.

Kahan shared his time with Good Food on Every Table on March 5 for a lengthy interview. The following excerpts focus on his cuisine, his dedication to sustainability, and how he was influenced by growing up with a father who was in the food business. A second piece, focused on Kahan’s work with Pilot Light, will follow.

On Publican Quality Bread, one of One Off Hospitality’s newer ventures, which uses high-quality, higher-priced flour, most of it sustainably produced by the Travis family at Spence Farm in Fairbury, Illinois: 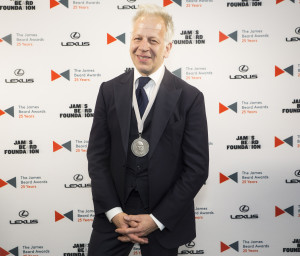 When we opened this bakery, the first six months we were bleeding money. It’s not an easy business. We’re restaurateurs, not bakery people. Thankfully [business partner Donnie Madia] reached out to a couple of bakery people he knows, they came, they made some suggestions. We had a consultant from France come in, and [head baker Greg Wade] just responded incredibly well to what we needed to do. We tried to do too much. Bakeries are really about a small set of products that are done really well…. If you want to make great bread and you want to use local ingredients, you have to pay for it.

About the cooking demonstration he and other chefs will conduct at FamilyFarmed’s Good Food Festival in support of Pilot Light, a nonprofit group co-founded by Kahan and other top chefs to integrate food education into the curriculum at Chicago Public Schools.

About the book he is writing about his work, the first of his long career, which focuses on The Publican restaurant and its emphasis on locally and sustainably produced ingredients.

We’re following the idea of The Publican from its inception, which was just a soundbite, “oysters, pork and beer,” to opening the butcher shop, opening the bakery, opening the Publican Tavern at O’Hare Airport. The Publican is all about our producers. We buy fish from sources that not one single restaurant in the entire city buys from. We buy oily fish, West Coast sardines…. We buy according to the Monterey Bay Aquarium [Seafood Watch] list. We serve “garbage fish,” sand dabs, I guarantee there’s not another restaurant in the entire city that serves those, and that’s one of the most delicious fish… What comes in the back door dictates what goes on that menu every day and it does change every day… We make a clean sausage across the street, we have a USDA co-packer. That business is really going to grow… 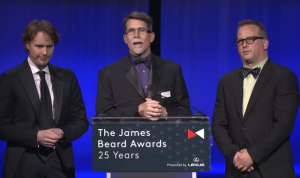 The idea of The Publican as this purely sustainable standpoint has really grown. So it’s going to be the recipes and the growth of the brand and a lot of attention to the people and the producers that enable us to do what we do… We opened the butcher shop so that we could do whole animal butchery and use everything. It’s easier said than done. Other people say, we buy the whole animal. They buy half a cow a year. It’s really hard to do for a traditional restaurateur. You have to have that flexibility in your menu. There’s probably a handful of restaurants that really can use the whole animal.

We don’t advertise that, it’s not our game. It’s important and we probably could learn from some other restaurant groups in the city and do a little more boasting about what we do and why it’s so special and the whole sustainability aspect of our company, but it’s really not who we are. We don’t know any other way to operate.

About the supply chain and seasonal challenges of obtaining local sustainably produced ingredients for a big restaurant group in a region with a relatively short growing season.

It’s obviously seasonal. In the summer, 60 percent. In the winter, I’d say it’s 35 percent, 40 percent. The Publican in the summer is probably 80 percent and above…. Is our bakery 95 percent local and sustainable? Yeah. When Marty [Travis at Spence Farm] doesn’t have flour and there’s no other local flour, we get a Red Rose flour, a transitional organic flour from California. It’s a great product, we get a great price on it. We make the decision equally from a business and a sustainability point of view.

About the emergence of the Good Food movement out of an era in which convenience foods and fast food predominated.

I really think that in the 30 years that I’ve been doing this, American cuisine has kind of emerged. We were not a food culture 30 years ago. Things went wrong after the wars, people ate out of cans and fast food. The tables are turning…. We’ve seen a lot of change in the last 10 years. It feels really good, it feels like we’re moving in the right direction.

Kahan related about how he encouraged LouisJohn Slagel of Fairbury, Illinois, now a leading producer of local and sustainably produced meat for the Chicago market, when he was seeking to build his business.

I remember the first day he came to Chicago… He showed up at Blackbird with some meat samples. I said, “Here’s the deal, dude. You’re going to have to bite the bullet for a while, but you’re going to get there. You’re going to be making deliveries and you’re going to be losing money on gas and product, but just believe in what you do and that your products are really good.”… [Today] we get hundreds of chickens from him a week. We get at least a cow and three or four pigs, and we buy goats and lambs from him and all of his neighbors. That kind of stuff makes me feel really good, I’m really proud of being part of the group that supported him and allow him to be successful.

On why people looking to improve the way people eat need not allow the perfect be the enemy of the good.

People have got to eat. That’s why Pilot Light is not about saying, “It’s gotta be organic, it’s gotta be this.” It’s not. It’s about a healthy relationship with food and understanding food and kids learning how to read labels, and having a strong idea what’s good for you and what’s not. It really ties in with education for children, big time.

Kahan’s father owned delicatessens and a smoked fish factory when Kahan was growing up, and Kahan says he worked for years filleting salmon and whitefish. He discussed what influence that had on his subsequent career in food.

My dad and I were male. “How’s it going, dad?” “Good. How about you?” “Good.” That was our conversation. So we’d really connect through food. When my dad and I would hook up, we’d go out to eat… That’s kind of how I first got interested in food. Before my parents were divorced I’d just always experiment with food. It’s in my makeup. I went to my parents one day and I said, “Do you mind if I take that corner of the yard and plant a garden.” My dad taught me how to plant flowers when I was a little kid, but never vegetables or anything, and I’m a trial and error guy. I tore up the sod and turned over the soil and I’ve had a garden ever since. I’ve had a garden for 40+ years.

“When my Aunt Ruth died, she had a lot of birth certificates from family members that came over from Europe and are now deceased. Great-grandfathers, great-great-grandfathers and grandmothers, and most of them were in the food business, from my dad’s side of the family. Some of them were jobbers down in the market here, they would push carts around and get food and deliver it to different businesses… When I was in college, this hippie chick did a reading for me, I was studying math and computer science, she did an astrological reading based on my time of birth, birthdate, all those things, and she said, it’s food! I was working in an organic food co-op back then, and baking bread and cooking for my roommates and stuff. So there was a little indication. But here we are.