Guest contributor Patty Cantrell is principal of Regional Food Solutions, a Missouri-based consulting firm that provides organizations and businesses with expert project development, writing, research, and facilitation — with a focus on the community economic development power that comes from supporting family-scale, place-based farms in their work to produce food that is healthy for people and the planet.

She writes here about how Louisville, Kentucky, is placing a heavy emphasis on local food in its economic development initiatives. Her article discusses how the potential for this urban-rural connection to promote jobs and development, and brings to light the West Louisville FoodPort, a 24-acre, $65 million project to help local and regional food businesses grow, in which FarmedHere — an innovative indoor vertical farming operation — will open its first facility beyond the original in metropolitan Chicago.

This piece also makes clear the meaning of the term “value chain coordinator,” which will be heard a lot as supply chains develop to increase the amounts of local and regional food available in markets around the nation.

Cantrell previously wrote an article, which drew much reader attention, about how businesses that emphasize locally made products are reviving the long-lagging economy in Corbin, Kentucky.

Mike Higgins had just become president of a national food manufacturing company based in Louisville, Kentucky, when he met Sarah Fritschner from the city’s economic development department. 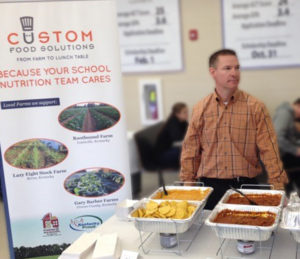 “Sarah asked if I would be willing to try local food in our products if she found the farmers and took care of getting it to me the way I would need it,” he said.

Fritschner is tasked with pulling this puzzle together as part of metropolitan Louisville’s job creation strategy. Another big piece the city and nonprofit developer Seed Capital Kentucky have secured is a $56 million food business park that will break ground this fall in West Louisville.

The picture of how local food can spur both urban and rural revitalization is getting clearer in the Bluegrass State. Louisville has led the way with a strategic focus on finding and connecting entrepreneurs along the regional supply chain from farm to table.

Fritschner herself joked: “It’s a lot of ‘Let’s get you and you together to talk’ and ‘What if we tried this?’ … Everything I do takes two years,” she said. “We’re building systems where there was nothing.”

Jim Barham is an economist with the U.S. Department of Agriculture. He calls this business-to-business relationship building the “soft infrastructure” that makes other “hard infrastructure” like trucks and packing lines work. USDA just launched a new program to support and partner with regional food relationship brokers such as Fritschner, known as “value chain coordinators,” in 10 metropolitan regions. Louisville is one of the partners and the only municipality in the group.

Value chains are mutual-aid affairs. They are supply chains built by businesses that need each other to satisfy demand. In the case of local and regional food, they’re trying to deliver on higher-purpose values that consumers and communities are bringing to market.

One example is schools trying to reconnect kids with the people and places behind food. Louisville’s Farm to Table program works with universities, schools and other institutions to source locally. Data from those buyers shows it’s resulting so far in at least $1.5 million annually to Kentucky farmers, Louisville Forward’s Theresa Zawacki said.

The overall big carrot for food value chain development in Kentucky is Louisville’s estimated $258 million per year in consumer demand for local food along with $353 million in commercial demand.

Jose Cubero, head of Louisville-area operations for Indianapolis-based Piazza Produce, is part of the value chain Fritschner is pulling together. He explained there is an internal motivation as well.

“I live in Kentucky. I’m proud of my state and my city. I want to do something to make a difference here,” he said.

Piazza reached the $1 million mark last year in local food; half produce and half meats and value-added products such as cheeses.

It’s helpful to have Piazza and other larger buyers on board, Fritschner said. It helps in conversations with rural entrepreneurs and leaders about the potential for growing their food and farm business connections with the city.

“Piazza’s trucks run up and down Interstate 65 every day,” she said.

Also encouraging is the news that Piazza Produce and several other companies with commitments to local food will soon co-locate and collaborate at the up-and-coming West Louisville FoodPort.

She and fellow philanthropist Stephen Reily started Seed Capital Kentucky in 2011. The catalyst was Mayor Fischer’s campaign promise to build the local food economy, followed by his big step to place it squarely under economic development as a job creation strategy.

“The political environment that our mayor established has been key across the board,” Heine said.

The FoodPort is anchored by a $23 million expansion of the Chicago-based company FarmedHere. Its new 60,000 square foot growing space in Louisville will be the first outpost for FarmedHere in a plan to replicate its indoor vertical farming operation.

Other initial FoodPort tenants include ingredient dehydrator Just One Organics and The Weekly Juicery, a busy fresh-pressed juice delivery business with five retail locations in the region. All are part of a growing local- and organic-leaning wing of Louisville’s important food and beverage business cluster.

FoodPort innovators could very well work in the future, for example, with others in the food and beverage cluster, such as equipment makers, Zawacki said. Louisville leaders there include Winston Industries of KFC fryer fame and First Build, a crowd-source designer connected to G.E. Appliances.

“The mayor sees opportunity here well beyond food,” she said.

“The site is large enough that we have the opportunity to develop community-oriented spaces as well as buildings to house the businesses,” Seed Capital’s Heine said.

It is close to the interstate and in a light-industrial part of town, which serves the needs of commercial-scale facilities. “But more interesting, it sits smack dab at the nexus of three West Louisville neighborhoods,” she said.

A 100+-member community council was part of planning from the start of the FoodPort, also known as a food innovation district.

Training and recruitment of neighborhood residents to work in FoodPort construction and at tenant businesses is underway. So are commitments from tenants and construction contractors to hire them. A two-acre teaching farm is part of the FoodPort design as well as open spaces for everyday neighborhood life and special events.

John Edwards is co-owner of the new Trackside Butcher Shoppe meat processing facility in Henry County, northeast of Louisville. Fritschner hooked him up with mentors and others who have been key in getting Trackside off to a successful start.

State senator and farmer Paul Hornback (R-Shelbyville) is happy about it, too. “Getting a processor for meats here locally is very important for our farm economy. Before, we had to travel quite a distance to get those services,” he said.

“It’s all about relationships,” added Kentucky’s newly elected Commissioner of Agriculture Ryan Quarles. “Often times markets can be created when a restaurant or a distributor develops a relationship with a farming family and grows to have trust and confidence in them to meet quantity and quality needs.”

“Sarah’s trying to have a large-scale impact on farmers in the state of Kentucky. She helped me understand my role in that.”