Guest contributor Patty Cantrell is principal of Regional Food Solutions, a Missouri-based consulting firm that provides organizations and businesses with expert project development, writing, research, and facilitation — with a focus on the community economic development power that comes from supporting family-scale, place-based farms in their work to produce food that is healthy for people and the planet.

She writes here about food businesses that emphasize locally made products are reviving the long-lagging economy in Corbin, Kentucky. The piece emphasizes two of the most important aspects of the fast-growing Good Food movement: that it can be an engine for community economic development, and that it is something that people respond to in rural as well as urban and suburban areas.

Today, though, it’s hard to find a parking space on the mile and a half of Corbin’s Main Street. That’s okay with city leaders and residents who prefer the commerce and community that a busy downtown builds. 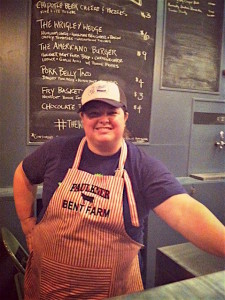 Kristin Smith is a farmer and co-owner of Wrigley Taproom and Brewery, one of the businesses featuring local food that are boosting the economy in rural Corbin, Kentucky. Photo credit: Community Farm Alliance

“People are walking around, hopping from place to place,” he said. “It’s a totally different vibe. … “Every storefront has someone working on it.”

The answer is important to rural and urban places across the country. Many are trying to build stronger futures with new local and regional commerce. A recent national inventory, for example, shows that Main Street environments build not only commerce and wealth but also underlying physical and mental health.

Bringing people back downtown to live, work, and play is key, said Corbin Mayor Willard McBurney. “To do that you need places to eat, places to shop.”

Corbin is among a growing number of towns discovering and capitalizing on the power of local food to provide that new economy stimulus.

A turning point was when Main Street manager Andy Salmons partnered with the successful Whitley County Farmers Market. Two years ago, they brought vendors and live music to downtown’s Vibroc Park on Tuesday evenings through the growing season. The event does two important things. It gets people used to coming downtown. It also serves as a business incubator and networking service for vendors. 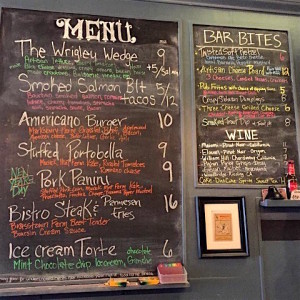 The menu board at Wrigley Taproom and Brewery, one of the businesses that is using local ingredients to help boost the area’s economy. Photo credit: Community Farm Alliance

Kristin Smith, a farmer and co-owner of downtown’s new Wrigley Taproom and Brewery, got her start selling beef and pork at the downtown market. She also field-tested her “New Appalachian” tacos, got acquainted with her now-business partners, and graduated with them to the brick-and-mortar restaurant. Another vendor that now operates out of a downtown Corbin storefront is Dewdrop Pottery.

Stacy Miller, program advisor with the national Farmers Market Coalition, is familiar with this phenomenon of farmers markets launching new products and enterprises. “I’ve seen it unfold in all parts of the country,” she said. “Creative, dedicated people recognize a niche in their community and begin to fill it.”

Federal agencies are partnering with regional economic development efforts to put new resources behind the power of local food to advance a range of objectives, from Main Street commerce to greater access to healthy foods. The Local Food, Local Places program recently announced a new round of grantees.

“Having a local food economy attracts people, whether it’s a downtown brewery or cheese maker,” said Olivia Collier, North Carolina program manager with the Appalachian Regional Commission (ARC). Thirteen states, including Kentucky, are involved in the ARC, which is a partner in the Local Food, Local Places program.

“People will travel for local food,” Collier said. “Residents also enjoy it and benefit from the new commerce.” Opportunities range from downtown revitalization to regional food distribution into larger-volume markets like schools and hospitals.

Motivated residents are part of the economic stimulus of local food. Downtown Corbin is up to nine restaurants, many farm-to-table, because people are hungry for local, scratch-cooked, and unique foods, said the Wrigley Taproom’s Kristin Smith.

“We have a massive void here in places to eat outside of chain restaurants,” she said.

Residents want to support neighbors like her. Smith came back home to southeastern Kentucky from California a few years ago to keep the sixth-generation family farm going.

“When someone you’ve known your whole life opens up a new restaurant, you’re rooting for them; you make a commitment to go there, to support them and their local suppliers,” Smith said. “A large majority of our community is rooting for us, and a large majority doesn’t even drink!”

They know the economic impact of going downtown for a homegrown burger extends out to farmers like Rich Meadors. His Sally Gap Farms is up to 40 acres of produce this year from 12 acres in 2013 due to strong growth to farm-to-table restaurants and other local outlets.

Smith asked Meadors to raise potatoes for her french fries at the Wrigley. He planted an acre to give it a try. This year he’s putting in at least five acres to supply the Wrigley year-round.

“It helps us a whole lot,” he said. “We move produce right in our hometown. It saves the cost of hauling and we’re able to trade out boxes and baskets rather than buy new.”

Sally Gap Farms’ story is part of nationwide growth in local food sales from at least $12 billion in 2014 to an expected $20 billion by 2019.

Growth from the Center

But those numbers reflect just the tip of the economic energy that local food can build.

Now that properties are occupied and downtown activity is strong, for example, the city of Corbin is expanding it work to attract residents to Main Street and surrounding neighborhoods. 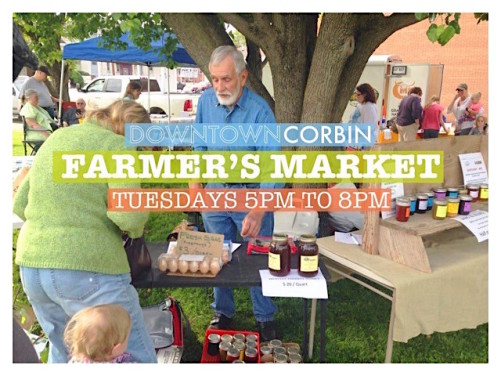 Promotional material for the downtown farmers market in rural Corbin, Kentucky, which underscores the importance of local food in the local economy. Photo credit: Downtown Corbin

“We’re working now with downtown property owners to renovate their second stories for residential use,” Salmons said. “We’re also connecting neighborhoods to downtown with new sidewalks and bike lanes. We want to make it conducive to leaving your car at home; that’s a new concept here.”

The resources Corbin needs to do it are also growing with its success. Salmons started his part-time Main Street manager job four years ago with an annual budget of $15,000. Today it’s up to $280,000 from the city’s general fund.

How did downtown Corbin do it?

“We formulated a strong sense of what we were going for,” Salmons said. “We wanted to restore that sense that it’s a viable thing to live, work, and play downtown.”