Farmer’s Fridge is a fast-growing, Chicago-based company that is gaining local and national attention for its vending machines that dispense delicious and fresh salads. The following article describes how Luke Saunders, the young owner of the recent startup, developed the innovative concept, and how his company has been assisted by its early association with FamilyFarmed and its participation in the nonprofit organization’s Good Food Festival & Conference and its Financing Fair.

Vending machines. Not exactly what comes to mind when you think of Good Food. The domain of candy, salty and sweet snacks, and sugar-and-calorie-laden soft drinks. 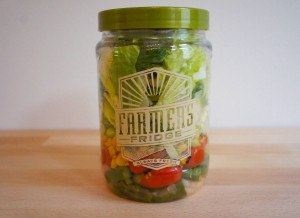 The clear and recyclable plastic jars used by Farmer’s Fridge for its machine-vended salads show off the bright colors of their fresh ingredients.

Until now, that is, thanks to companies such as Farmer’s Fridge, a business that is selling same-day-fresh jarred salads and healthy snacks from vending machines in dozens of locations around Chicago. It is a counterintuitive concept that has already received significant local and national media attention, including a feature story last fall on NBC Nightly News.

Farmer’s Fridge is the brainchild of young entrepreneur Luke Saunders, who made a connection with FamilyFarmed during his startup stage. He is now a regular participant in the organization’s Good Food Festival & Conference, an annual event that is coming up March 16-18 at Chicago’s UIC Forum. He credits his participation in the 2015 Financing Fair, held on the first day of the conference, for helping him achieve the financing he needed to scale the business up.

Saunders discussed the concept and rapid growth of Farmer’s Fridge recently at the building, under the El tracks in Chicago’s West Loop community, that houses the company’s offices and production kitchen. 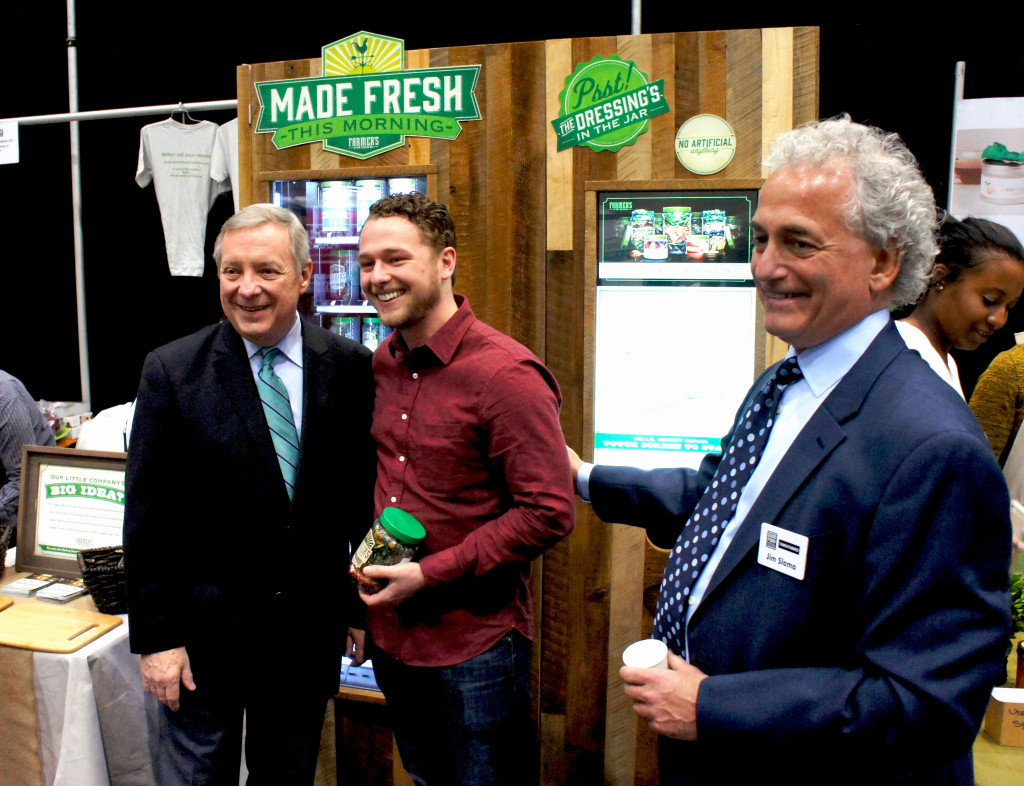 Saunders had some precocious entrepreneurial experience as co-founder of a bicycle rental company while a student at Washington University in St. Louis, from which he graduated in 2009. But he was led to the idea for Farmer’s Fridge when he took a corporate job in metal finishing sales while his wife attended law school at University of Michigan.

That job both took Saunders into the factories of a number of food processing companies — and also taught him how hard it still is for many business travelers to eat well when they are on the road. “I’m traveling all over the place and I couldn’t really find the fresh healthy food that I wanted to eat,” Saunders recalled.

He started developing the concept, and settled on salads after first considering and dismissing sandwiches — “I’m never going to put a sandwich in a vending machine that tastes better than you-name-it sandwich place.” — or prepared meals, about which he said, “To get meals right, they’re cold in the machine, and then you’re going to have to heat them back up, there’s an extra step.”

Salads, he continued, work well in the vending machine concept because they are both stored and eaten cold, and in Saunders’ words, “It has to be something where there aren’t a lot of people doing it as well as they could.” 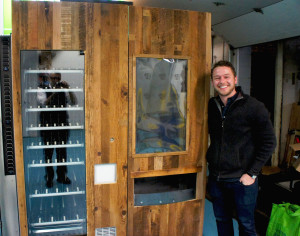 Luke Saunders is the founder and owner of Farmer’s Fridge, whose growing three-year-old Chicago business sells fresh salads in jars from vending machines. Here he shows off a new model vending machine that the company is installing at its sites.

The first steps were arranging to produce the specially designed vending machines, creating a menu, and designing and planning the kitchen. The next step — persuading store and property owners to give up floor space for an unproven concept, that people would take to a salad-dispensing vending machine — took time. But after building customer interest with an initial location in a food court in the Loop, Farmer’s Fridge was able to gain placement in a handful of 7-Eleven stores in the city.

In the short time since, Farmer’s Fridge has grown to 35 locations (see map) with an ambitious goal of expanding to 100 by September and 140 by the end of 2016.  And an experiment in which Farmer’s Fridge participated for the NBC Nightly News piece showed there is a keen desire for a healthy vending machine option.

A Farmer’s Fridge machine was placed next to a conventional snack vending machine, with everything priced at $1 (Farmer’s Fridge salads usually go for $8.00, payable by credit card using a touch-screen ordering system). The salad machine sold many more units than the candy-and-snack machine did. “You can go much higher than a dollar and still find a point where you’re meeting people where they need to be to change behavior,” Saunders said. He added: 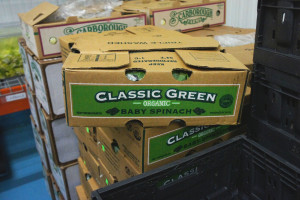 Farmer’s Fridge heavily sources organic and otherwise sustainably produced produce. During the growing season in the Chicago region, much of its produce comes from local and regional farms.

“When we do little surveys, we find that perceived value on certain foods is much higher. We would ask, ‘How much would you pay for a fast food option?’ Ten dollars is the cost to get their ideal meal there. And then we say have much would you pay for this salad, and they say five dollars. You could still sell salad for $5 and make money, that’s no problem. But that’s because they’re not seeing the salad necessarily as a meal, or one thing that came up a lot is that there’s a lot more meat in the fast food option. But all of this is driven by marketing. You can actually short-circuit that if you educate people more about the price they’re paying for what they’re eating, where it’s coming from. I think that gap starts to get smaller.”

Farmer’s Fridge has begun to expand its marketing and promotional activities as well. For example, customers who sign up for news and updates from the company at my.farmersfridge.com receive a code for a free salad. 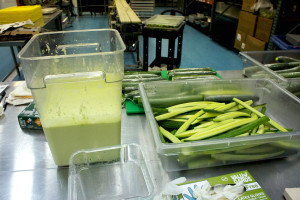 Farmer’s Fridge emphasizes the freshness and care taken with its ingredients, many of them produced by farmers from the Chicago region. Vegetables and fruit are hand-cut and all dressings are made in the company’s kitchen.

There is a good reason why the concept is taking off. The salads pop with freshness. The vegetable and fruit ingredients — with a heavy emphasis on sustainably grown and, when available, local produce — are hand-prepared and composed the same day in the Farmer’s Fridge kitchen. Each salad is packed into an attractive and recyclable clear plastic jar with a container of house-made dressing. Any salads not sold in a day are removed as the machines are replenished, and are donated to food assistance providers. 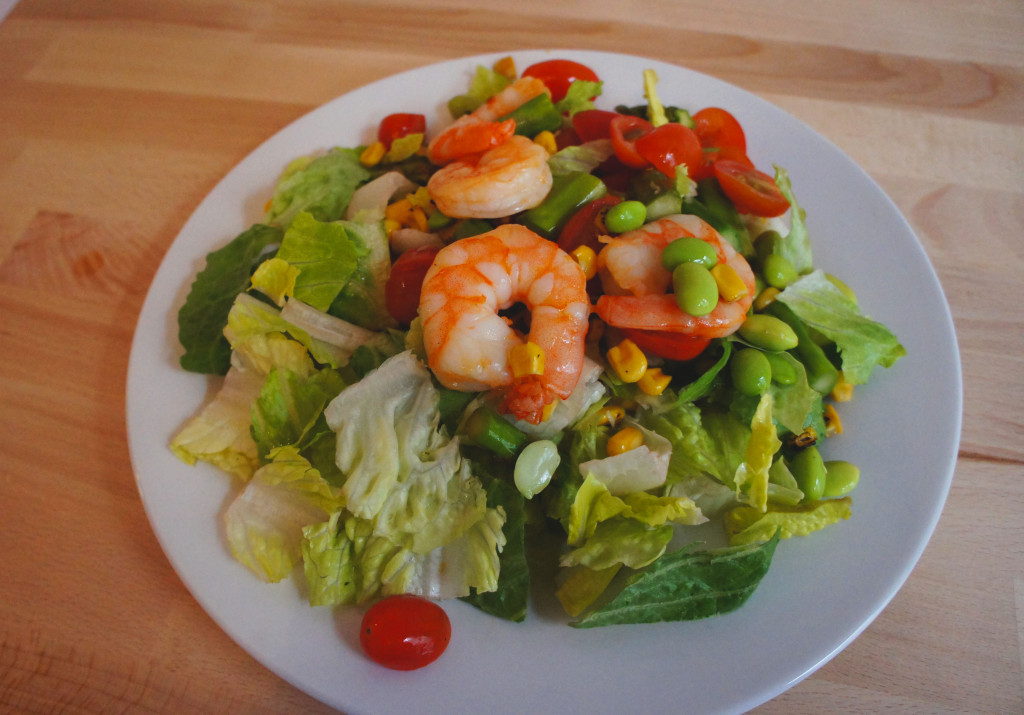 Salads from Farmer’s Fridge, made from a variety of ingredients and colors, make a pretty display on the plate.

The Farmer’s Fridge machines also vend smaller breakfast and snack portions of items such as oatmeal, granola and Greek yogurt, crudités and dip, and an addictive salted dark chocolate-and-nuts trail mix. Alvarado noted that she is working on a line of snack-jar-sized meal options — “A little grain bowl with mushrooms and pesto, we’re going to bring salmon onto the menu with potatoes and green beans and a romesco sauce, things that are a little heartier but can still be enjoyed cold, and maybe will complement a salad.” — and the company has also recently developed a line of cold-pressed juices.

Saunders said the seed money for this project came out of his own pockets, noting, “I only had the money to get the first kiosk up and running, but at least at that point I knew I had proved that this is a viable thing. It is much easier to get people to come on board after that.” The next stage, as it often is for entrepreneurs, was persuading friends and family to support the fledging company financially.

But the connections Farmer’s Fridge was able to make by associating early on with FamilyFarmed played a big role as well. Referring to his company’s first year as an exhibitor, Saunders said, “That was really the first time we got plugged in locally to a group of people who were very like-minded. From that moment, we are doing all this stuff and now we have other people who understand it and we can talk to them and get advice and network. It was invaluable.”

That was capped by Saunders’ participation in the Financing Fair at the 2015 Good Food Financing & Innovation Conference, which makes up the first day of the annual Good Food Festival & Conference.

“We knew we needed institutional investors or professional angel investors to come and help us scale up because we also needed the expertise,” Saunders said. “We were actually able to find people as part of that ecosystem, so not only the first year, when we got just kind of generally plugged into the scene, but then we were able to actually get access to capital.”

“Which is why we are sitting in this room here right now,” he added.