Farms running community supported agriculture businesses, or CSAs, have multiplied across the United States in recent years. Under this practice, farms are able to raise revenues for their plantings by selling subscriptions to consumers, who receive boxes of products from the farm over the course of the season.

Now the concept has spread to another food sector: sustainable seafood. Patty Cantrell, a frequent contributor to Good Food on Every Table, writes in the article below about Port Orford Sustainable Seafood, a community supported fishery in Oregon. And she explains how this region has also spawned the Southwestern Oregon Food Systems Collaborative, made up of businesses, nonprofits and institutions in six Oregon communities.

Patty Cantrell is principal of Regional Food Solutions, a Missouri-based consulting firm that provides organizations and businesses with expert project development, writing, research, and facilitation — with a focus on the community economic development power that comes from supporting family-scale, place-based farms in their work to produce food that is healthy for people and the planet.

Seven years ago, Aaron Longton and a few fellow commercial fishermen from the small community of Port Orford, on Oregon’s rocky southwestern coast, struck out on their own. They pushed off from the global commodity markets they had supplied for years, for less and less return. They set sail for new markets on the promise of an emerging direct-to-consumer business model called Community Supported Fisheries. 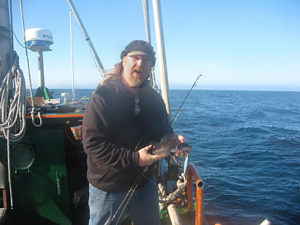 The move to offer consumers advance shares of their local catch was not just for economic survival. The founders of Port Orford Sustainable Seafood were also motivated by their belief that building a brighter future for their families and neighbors means finding more productive ways to live off their land and the sea beside it.

“This is what we have to work with,” Longton said of the rolling waves and abundant stocks of tuna, Dungeness crab, salmon, and more under his boat. “We’re adjacent to this great resource. We need to take that and make it work for us.”

His words are like a mission statement for a larger group of businesses, nonprofits, and institutions in the area that are taking a new and radical approach to this challenge. They aim to build more community wealth from the region’s rich natural resources. Their strategy is to build new locally owned, mutual-aid supply chains across great market gaps that have formed in the wake of the region’s near-total focus on global commodity exports.

The Southwestern Oregon Food Systems Collaborative unites six port communities across Oregon’s southernmost counties: Coos, Curry, and Douglas. The “value chain” approach it is taking to economic development is showing signs of success in a region still reeling from the collapse of its timber industry. The approach also shows real potential for transitioning so many other, mostly rural places now caught between past economies of resource extraction and future economies of resource conservation.

It is a process for identifying specific market-driven opportunities, exploring the many supply chain links needed to meet them, and building the business-to-business relationships that can bring the benefits home. Historical commodity approaches basically converted the region’s timber, agriculture, and fisheries into financial capital, which mostly left the area. This approach values and targets other types of wealth-building capital as well, such as the natural capital of sustainable fish populations and the intellectual capital in new products and processes.

The group confirmed that a top-level value chain opportunity for coastal southwestern Oregon is surging demand for local, sustainably caught, and premium-processed seafood.

“Each boat size, each species, etc. has a different value chain,” she said. 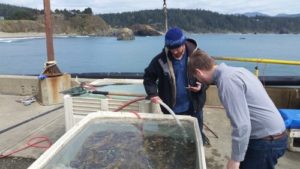 Each also faces big challenges given the current industry structure. The mid-size range of seafood businesses is gone. The next generation of entrepreneurs, innovation, and investment is stranded. Growing demand for food that comes with fresher taste and less damage goes unmet. Deliberate development of supply chains across this middle, which serve people and places better, is what’s new and radical about the value chain approach.

Oregon’s industry landed 292 million pounds of seafood in 2014 worth $158 million. More than 80 percent is exported, however, and most of that is sold to just a couple of large international buyers. The catch travels frozen to places like China for processing before working its way back to Oregon dinner plates.

Cold storage, processing, distribution and other infrastructure that locals need to serve different market channels is now oversized, far away, or falling apart. New opportunities that languish as a result range from sashimi grade tuna and salmon for Asian and domestic markets to local fish for tourism, an equally important regional industry. In the meantime, many essential facilities, like the public Port of Port Orford, from which Aaron Longton and crew operate, tread water.

“If we can’t keep this dock running, the collateral damage to fishermen here would be huge,” said office manager Katie Dougherty. As much as one third of the work force around Port Orford (pop. 1,200) is directly involved in commercial fishing, with a catch worth upwards of $3 million each year.

“It’s pretty dynamic how losing this dock would affect families and other businesses here,” Dougherty said.

Shifting mindsets
It looks now, however, that the Port of Port Orford will not only stay afloat but also expand its services. Projections include 40 new jobs along with more revenue needed to secure the dock for the local seafood economy. The shift came about in part after the Collaborative introduced port authorities to some new entrepreneurial uses that an earlier plan, designed around the current industry structure, had not contemplated. 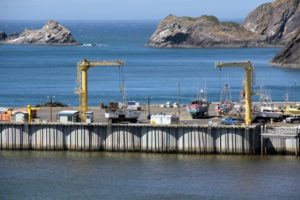 The “dolly dock” at the Port of Port Orford is the only one in America and one of just a few in the world. Because the port is directly on the ocean, without a safe harbor, cranes lift boats in and out of the water. Boats park in homemade moveable “dollies.” Photo: Port Orford Sustainable Seafood

“We have more requests for space than we can fill right now,” office manager Dougherty said. Nine businesses are in line to locate at the planned 20,000 square-foot multi-use dock facility. It is twice the size of the port’s older cannery and will include new retail, tourism, and smaller-scale processing space in addition to meeting the growth needs of an existing commodity-market anchor tenant.

“(The Collaborative) put us in touch with these people and helped us understand what they want and what they need,” she said.

Newcomers include two fresh fish retailers and one entrepreneur who needs the unique access to fresh seawater the port provides for live fish sales. The company is already on-site gearing up for marketing live sea urchins and cultivating the sea vegetable dulse (aka “bacon-flavored seaweed”) using a new aquaculture process patented by Oregon State University.

Business starts
Port Orford is just one place where value chain thinking is beginning to shift local seafood industry reality. Many connections are still subtle yet groundbreaking in terms of who is talking together and how they are finding shared interest in addressing pain points and exploring different business directions.

Collaborative member Rick Goche said he sees it in new business activity and more people getting involved. Goche is a local fisherman and chair of the Oregon Albacore Commission. His Sacred Sea Tuna company has helped pioneer a domestic sales direction for the state’s tuna sector. “We went from just 5 percent to North American markets six years ago to 55 percent today,” he said.

Finding local business solutions to local business problems is one of the ways people see the Collaborative working for them. An example is a new business now solving a major problem that fishermen, port operators, and seafood processors in the region all share.

One port faced crushing costs of investing in refrigeration just to hold mounting fish waste in addition to transportation and disposal costs. Another port was dumping its fish waste at sea. Now the startup company SeaCoast Composting takes fish waste from ports and processors in the area. It is developing a unique, value-added blend that also includes local dairy and forestry waste.

“I was excited to learn about this seafood group,” said owner-operator David Boyer. “They started connecting me. It’s pretty much a hub.”

The lack of cold storage is another big need spurring new value-chain conversations. It came up during “dockside discussions” the Collaborative held up and down the coast. The input has prompted local ports to take a closer look at investing in cold storage to serve an emerging set of customers.

Tuna commissioner Rick Goche believes the region could build a new generation of seafood businesses with cold storage investments. “The market for sashimi loins, for example, is growing in the U.S. But it’s slow because of limitations in refrigeration,” he said.

Back home
How all of this builds lasting community wealth is something that Aaron Longton thinks about back in Port Orford.

“Having our port involved now is real positive,” he said of the new dock design and shift in business development perspective. It is opening opportunities in tourism and for fishermen to explore a business world beyond commodity markets.

Making that transition is difficult, he said. “Most fishermen are so removed from the market. They’re reliant on big buyers and have no relationship with the consumer on the other end.”

The middle ground is stirring though, he said.

The value chain work is connecting area businesses that have the potential to go farther together. It is also connecting with other assets like the “jewel of a marine reserve we have here in Port Orford.” He’s talking about the Redfish Rocks marine reserve, which his community worked with regulators to create.

The Port Orford Ocean Resource Team represents the grass-roots action that made it happen. It is an example of fishermen and local residents stepping up to protect threatened breeding grounds for the future fishery rather than fighting government for the present short-term fishery.

Ultimately it is all connected, Longton said, with consumers and markets that are beginning to understand that “who fishes matters, and where you put your dollars when you buy fish matters.”