Those involved in the Good Food movement believe that if we are going to build a better food system, we need to promote healthier habits among our youngest eaters. Since 2005, Chicago nonprofit Purple Asparagus has put that belief to action, bringing its engaging food literacy program to children kindergarten to 2nd grade in selected Chicago schools.

The program — created by Melissa Graham, the organization’s founder and Executive Director — entails monthly visits by Purple Asparagus staff and volunteers to classrooms participating in the program. Each visit features a type of fruit or vegetable that is in season at the time of the lesson. For example, a mid-May program at the Horace Greeley Elementary School in Chicago’s Lakeview neighborhood visited by FamilyFarmed featured a lesson about various types of herbs.

The centerpiece — actually the placemat — for each lesson is an 8-1/2-by-11 inch placard which has photos of types of food being discussed on one side and the recipes for the food items that the children prepare during the classroom session. The goal is not only to get children more engaged in learning about food and cooking, but to take the cards home and ask their parents if they can make the recipes there.

These placards, and a cookbook compiled and given to students at the end of the school year, have proven very popular among the kids, as Melissa explained in the interview excerpted below: “One of the little girls in the classroom came up to me during the first session and whispered, ‘We’re going to get the cookbook at the end of the year?’ It’s something they really look forward to.” 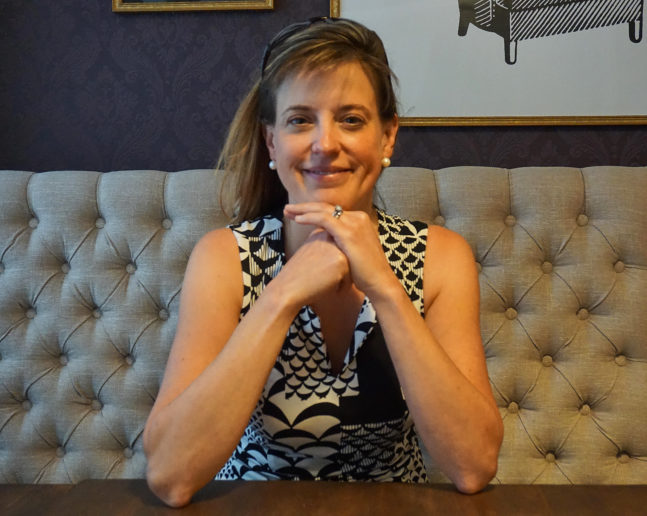 Melissa Graham transitioned from a first career as a lawyer after her son was born in 2004 and founded the Purple Asparagus food education nonprofit the next year. She continues to serve as Executive Director of the organization. Photo: Bob Benenson/FamilyFarmed

With the 2017-18 school year right around the corner, we are happy to present our chat with Melissa Graham of Purple Asparagus.

Melissa: I was an attorney for 10 years. Back in 2004, my son was born. It was a real transition point for me and my husband. My husband was an associate at the same firm, he made partner in 2005… We sat down as a family and said, “Do we want to both be doing this big law thing?” I realized it was time for me to move on. I started a catering company called Monogram Events. We did seasonal and sustainable cuisine… At the same time, I started Purple Asparagus…

We were invited into Logan Square’s McAuliffe School, they were running an entire program called Healthy Eating by Design with several partners. Our contribution was an after-school program geared toward families… Each of the classes celebrated a different seasonal fruit or vegetable. It was great, it was popular, kids were excited about it. The first program was really well populated. As the year went on, it was harder and harder for parents to come after school. It wasn’t offered in the evening hours, it was right after school…

In 2010 we shifted to this during the day, in-the-classroom school delivery. We saw we were reaching a wide variety of kids.…

Q: Was there much trial and error in coming up with the classroom programs?

Melissa: Yes, a lot of trial and error. In how the presentation went, in the recipes we use, even what I consider the most crucial tool in our arsenal, which is those 8-1/2-by-11 laminated cards. We have an herb lesson plan. Herbs kind of look the same, they look like little green leaves. How are the kids going to be able to distinguish them on a plate? I looked online, found four pictures of herbs and laid it out on a Word document and just printed out these handouts. As I was leaving one of the classes, there was this little girl, she took her little scissors out of her bag and she started cutting it into flash cards. I said, “That is brilliant.” That’s how those whole recipe cards became a part of our toolkit. 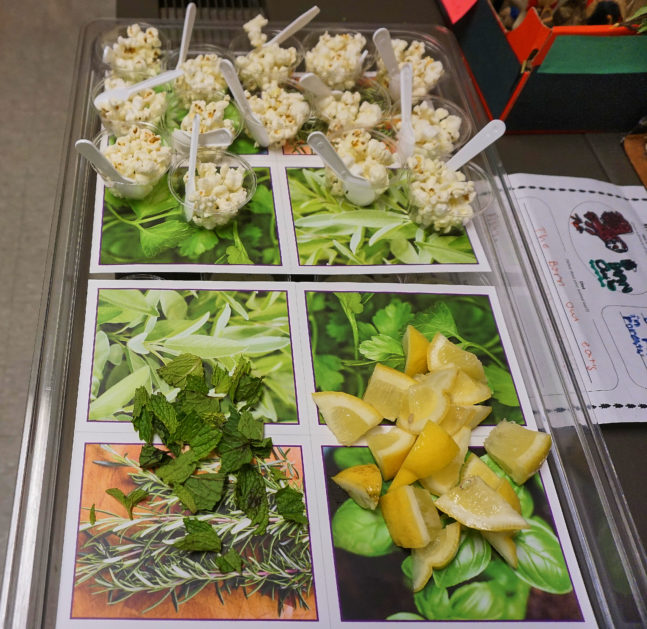 Laminated placards with photos of the subject foods on one side and simple recipes on the other are distributed to children participating in each of the Purple Asparagus lessons. For a May lesson at Chicago’s Horace Greeley Elementary School, recipe ingredients are laid out on a placard featuring various types of herbs. Photo: Bob Benenson/FamilyFarmed

Q: That has to be very popular among both the children and the adults. They are simple enough for the kids to do on their own, but they’re also for parents who want to get their kids to eat better.

Melissa: I was at the National Teachers Academy, where I have taught for five years. One of the little girls in the classroom came up to me during the first session and whispered, “We’re going to get the cookbook at the end of the year?”… It’s something they really look forward to…

Q: 2005 was only 12 years ago, but in terms of the maturation of the Good Food movement, we’ve come a long way. With the children, how much more sophisticated, has it gained from where they may not have had any knowledge or very little knowledge in 2005?

Melissa: Yes. You have to look in different communities. Last year, we ran a couple of pop-up programs in higher-income schools. The idea for that was to make families in the higher-income scale more aware of who we were, to market the program to the schools, hopefully build stakeholders for the organization. Being in the classrooms just last year, the knowledge that the kids were having was far more than it was in 2005. There is also a change in the underserved communities we work in, but it’s more school-driven than family-driven…

Q: And from the other side, among parents, how much more sophistication is there?

Melissa: I think it’s definitely on the higher-income schools. We’ve become such a big food culture in the city… Parents on the other side, it tends to be circular. Sometimes when kids know stuff, it’s coming from the parents, and sometimes it’s coming from the schools. They’ll go home and say, “Hey, mom, I had a lentil and lentils are awesome.”… A big issue, and something we’re hoping to tackle… is the fear of waste. If the kids aren’t eating it and it’s going to waste, they don’t want to explore. There’s not as much ability to say, “Oh, well, he didn’t eat it, it’s no big deal.”… One of the things we want to do, we have these family cooking programs, we want to expand those to include a real strong food waste component, to tell how to use the whole plant… 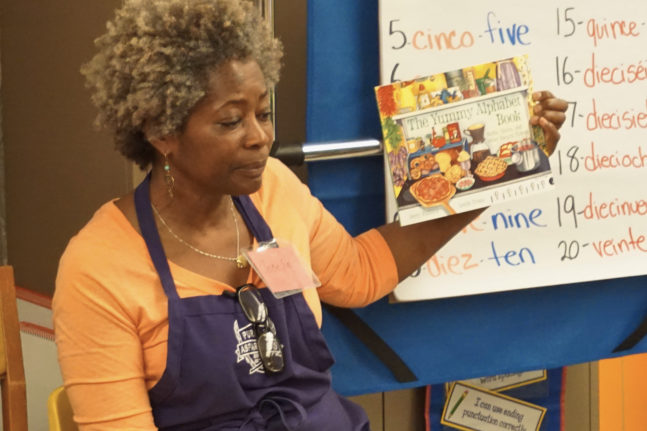 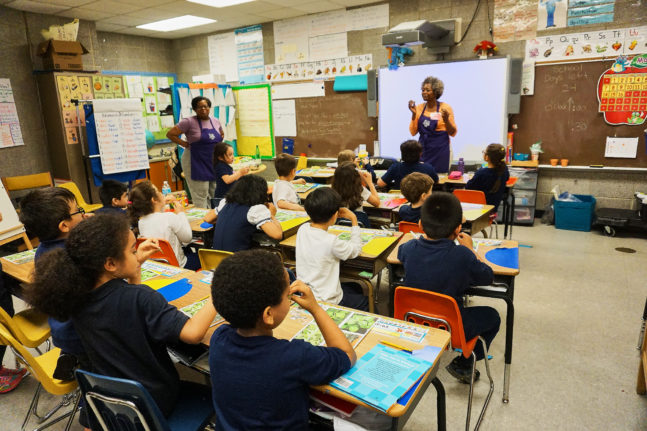 Q: If you’re affluent and knowledgeable and you have access to everything, then it’s just providing more information… For that constituency that’s eating chips and soda for breakfast from the corner store, it’s just getting them to eat any whole foods, any fresh meat or vegetable.

Melissa: We get a lot of that. “Why aren’t you talking more about organic?” First of all, I’m talking to 1st graders, I really just want them to try what we’re doing. But I also don’t want to be judgmental. The biggest part of our program is trying to get judgment out of it. So for me to be sitting there saying, “You should be eating an ORGANIC tomato” instead of just a tomato, I’m not going there…

Q: It’s just really important to meet people where they are…

Melissa: Just making sure it’s something that has that thread of familiarity and comfort to it… I think part of the problem in this country is that we’ve lost the joy of eating, and we’ve lost the pleasure of being at the table. And part of that is that we’re scared of food. We’re afraid it’s going to make us fat, we’re afraid it’s going to give us heart disease. We’re trying to come at people with the simple common sense notion that if you eat lots of fruits and vegetables, lots of whole grains, get the processed foods out, then you’ll do well.

Q: Most of the advances the Good Food market has made have been because of one thing: Consumer-driven market demand.

Melissa: You see it with McDonald’s and sustainable seafood coming into that. Or Tyson moving toward antibiotic-free chicken, that is consumer demand. If you are going to have a sea change in this country, that’s where it’s going to come from.