Pilot Light is the chef-driven program that helps Chicago Public Schools integrate food and nutrition education into their students’ overall curriculum. And the nonprofit organization is prepping for its biggest expansion yet, adding eight schools to its lineup for a total of 14 around the city of Chicago.

The expansion is part of a partnership between Pilot Light and the Community Programs Accelerator at University of Chicago, and all of the new schools (like U of C) are located on the city’s South Side. This is consistent with the program’s strong orientation toward increasing food literacy in underserved communities.

Pilot Light’s other major recent innovation is internal: Chef Justin Behlke recently joined the organization as its first Culinary Director. His devotion to food education and social justice prompted him to take the position with Pilot Light and leave a plum job working under Iliana Regan, a rising star on the nation’s culinary scene, at her Kitsune and Elizabeth restaurants. 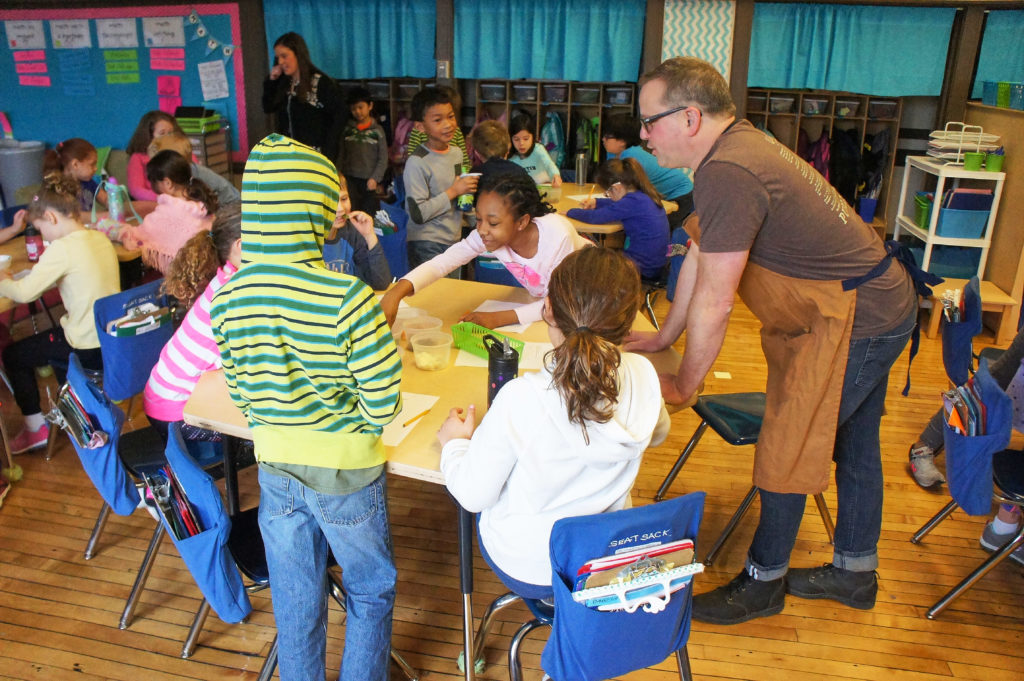 Paul Kahan and other Pilot Light chefs participate in occasional classroom teaching days. The program, though, works with teachers throughout the school year to integrate food education into the overall curriculum. Photo: Bob Benenson/FamilyFarmed

Since its founding in 2010 by leading Chicago chefs Paul Kahan, Matthias Merges and Jason Hammel, Pilot Light has taken a unique approach: Its lessons are not just about food, but rather food in the context of the subjects taught every day in the classroom. So, for example, a class about immigration might include a discussion of where our ethnic foods originated. A science class might have an emphasis on how nutrition works in the human body.

The problem for the very busy founders — and the other chefs they have recruited  — is that they were finding it difficult to meet all of the time demands of the growing Pilot Light program. Bringing Justin on as a full-time employee eases the burden on them in a major way.

The following are excerpts of an interview FamilyFarmed conducted with Justin and Kendra at Pilot Light’s offices in Chicago’s West Town neighborhood. 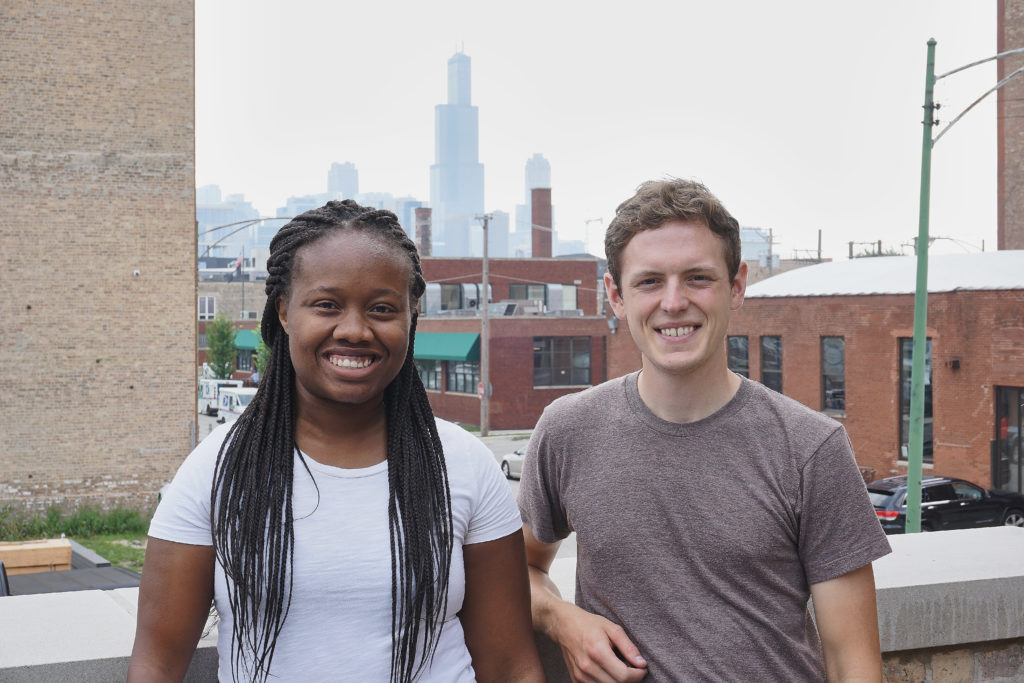 Q: Let’s set the table for Pilot Light’s activities in the coming school year, because I know you’re expanding.

Kendra: We have a partnership with the Community Programs Accelerator at the University of Chicago. In part of that partnership, they help us with our impact on the South Side of Chicago… We’re recruiting 24 third to fifth grade teachers from those eight schools and they’re going to be enrolling in the Institute for Food Education… We had some interns from the University of Chicago Lab School and they were helping us with their community resources, so they built out community profiles for all of our neighborhoods that included restaurants, farmers markets, anything that’s available in the neighborhood so teachers can learn about it at the summer institute and figure out ways they can incorporate community resources into their classrooms.

Q: I’m an avid home cook, and when I write about home cooking, it’s always about cooking is easy, it doesn’t have to be crazy complicated.

Justin: Yeah. It really doesn’t… How do we make this approachable? If you have a food experience and give a recipe, is it easy to do and can they provide something for the kids to take home for their parents to do, and what do those resources look like?

Kendra: One of the things we’re encouraging our teachers to do at the beginning of the year is do an assessment of their students to figure out exactly what’s available in the neighborhood, how are you eating at home, do you have family meals at home, what does your meal look like on a regular basis, so they can start incorporating food that’s accessible to their students.

Q: I assume there’s some degree of mentorship from the teachers who have already been through the programs.

Kendra: They’re going to have a specific day when they have leadership training and give them guidance on how to be mentor-teachers, and also let them interact with our new teachers to give them guidance as well, what the program looks like, what’s the best way to implement lessons into your program and insight into the dos and don’ts for Pilot Light.

Justin: The real goal is for the program to grow in such a way that it allows the teachers to do it themselves… The reality is that we’re not going to have enough volunteer chefs and people. And as you grow, you really want the classroom to sustain itself and utilize your labor and your people within the organization in a really mindful way, so we provide support and we’re doing the trainings well enough that the teachers feel ready to go.

Q: Let’s talk a little about your role and how this came about.

Justin: I focus really developing the volunteer base that we have. In particular volunteers who are working with food, working with mentoring teachers, doing all things involved with food. With that, I also get to set up the system of how to manage these volunteers, how we get them to engage with the teacher. You have for the last how many years, the core main chefs who have had to fill in for all these events and be here and here and here. And to have me on staff now… It allows us to just do it as a team, take a lot of those responsibilities and development that those guys were working on but they also have many restaurants and crazy lives, and just sort of focus on developing the culinary side of Pilot Light. The thing I’m most excited about is the community outreach we’re doing, these really meaningful partnerships and showing we’re invested in the community and doing classes and demos and events here and there. 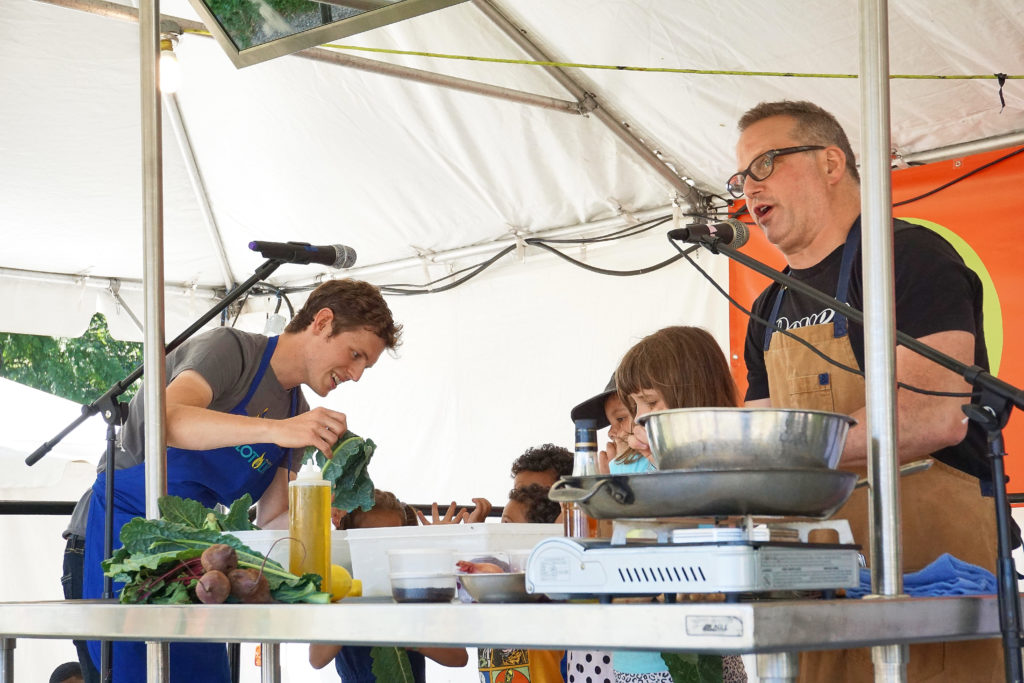 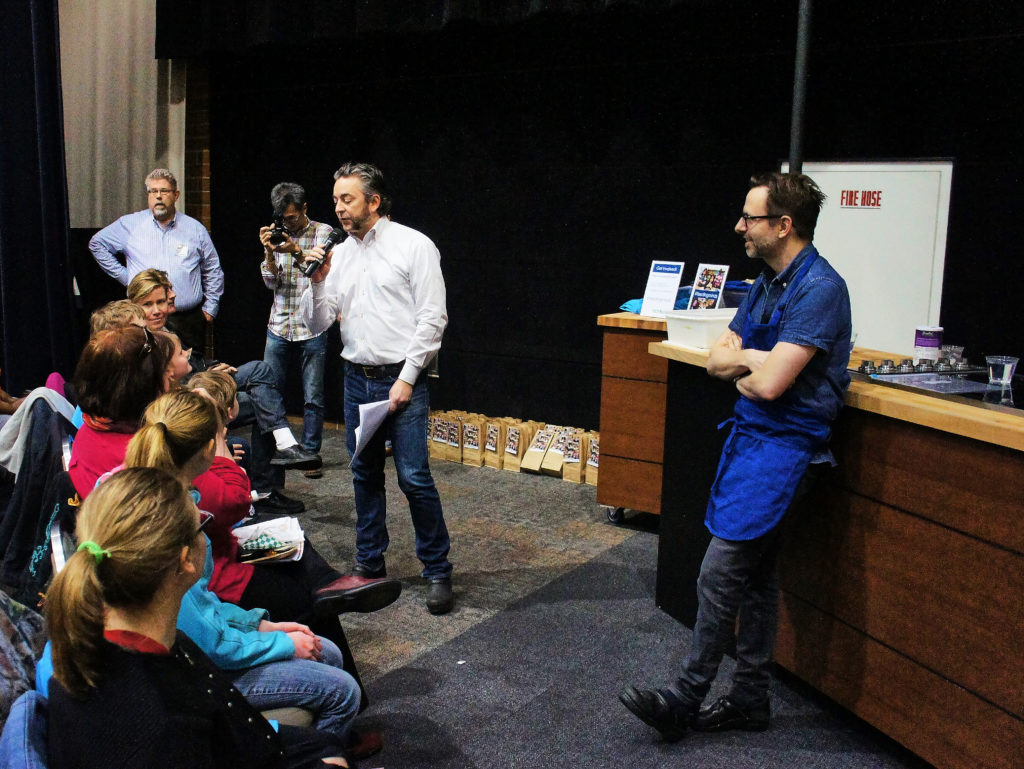 Q: Developing interest in a culinary career track is one of the best job opportunity areas that we have in the city. Is that something you’re working on?

Justin: Yeah, it’s a natural. If we’re working with [Chicago’s] Washburne Culinary Institute, we’re using their space and have a partnership with them, it only makes sense that we would connect those students with the chefs we work with….

Q: The Local Food Procurement Policy [for Chicago Public Schools, recently enacted by the city government] will be a new tool to move things forward. They’re going to be required to bring more Good Food in, as more children are introduced to local, sustainable food and learn that the humane and fair part of our definition of Good Food is important, the more they’re going to demand it.

Kendra: We give our teachers an assignment to create an advocacy project, where they study their community and figure out an important food issue that their community faces and give that project to their students they can come up with. One class this year focused on food deserts and learned about them and where they are exactly in Chicago and they were writing letters to their alderman. And we had one in which the teacher really focused on food waste and even made compost bins at school…

Justin: We were in the classroom with the food deserts and they were having a big conversation about mapping out food deserts. The kids’ awareness to the fact that they live in a food desert was really high, and they were like, “This is unfair.” Knowing in a 5th grade class that that exists and they’re part of it. They looked at the map and said, “Why does the North Side have all these grocery stores? Why are there no food options down here?”