We at FamilyFarmed conduct most of our work to build a better food system from our base in the city of Chicago. So we relish the opportunities to get into the country and visit the farmers who are the heart and soul of the Good Food movement — such as our trip Monday to two of our woman-farmer friends in Pecatonica, a farm town 100 miles to the west with a whole lot of progressive thinking about Good Food growing.

The first stop was at Hazzard Free Farm, owned and cultivated by Andrea Hazzard (better known as Andy) since 2007 on a family farm that has been in operation since 1847. Andy grows heirloom varieties of wheat, corn, popcorn and oats using organic practices, and sells directly at farmers markets, online and through sales to restaurants. The second stop was Gretta’s Goats, where Gretta Winkelbauer and husband Eric Strong raise a variety of goat breeds to produce milk for soap and cheese, along with some egg-laying hens.

One thing the two farms have in common: They both are recipients of grants from Chef Rick Bayless’ Frontera Farmer Foundation — Andy for a gravity table that enables her to screen out impurities and unwanted materials from harvested grain, and Gretta for the small on-farm creamery where she and Eric produce their cheese. FamilyFarmed and Frontera Farmer Foundation collaborated on the Frontera 30th Anniversary Celebration fundraiser on April 30 at the Art Institute of Chicago, which netted $140,000 to advance the organizations’ efforts to grow the market for Good Food.

The Hazzard farm event was an Organic Field Day organized by MOSES (the Midwest Organic and Sustainable Education Service) and OGrain (the Organic Grain Resource and Information Network). Andy conducted a tour of her operation, located on a portion of her family’s farm, including her processing and milling facilities, then led the group out into her fields. There she was joined by Ellen King, baker-owner of Hewn Bread in the Chicago suburb of Evanston, which whom she has collaborated on the Great Midwestern Bread Experiment.

In the video below, they discuss how and why they chose to grow a heirloom wheat variety called Marquis to encourage biodiversity while helping meet the rising consumer demand for better, healthier grain.

Here are additional photos from a beautiful July day on the farm. 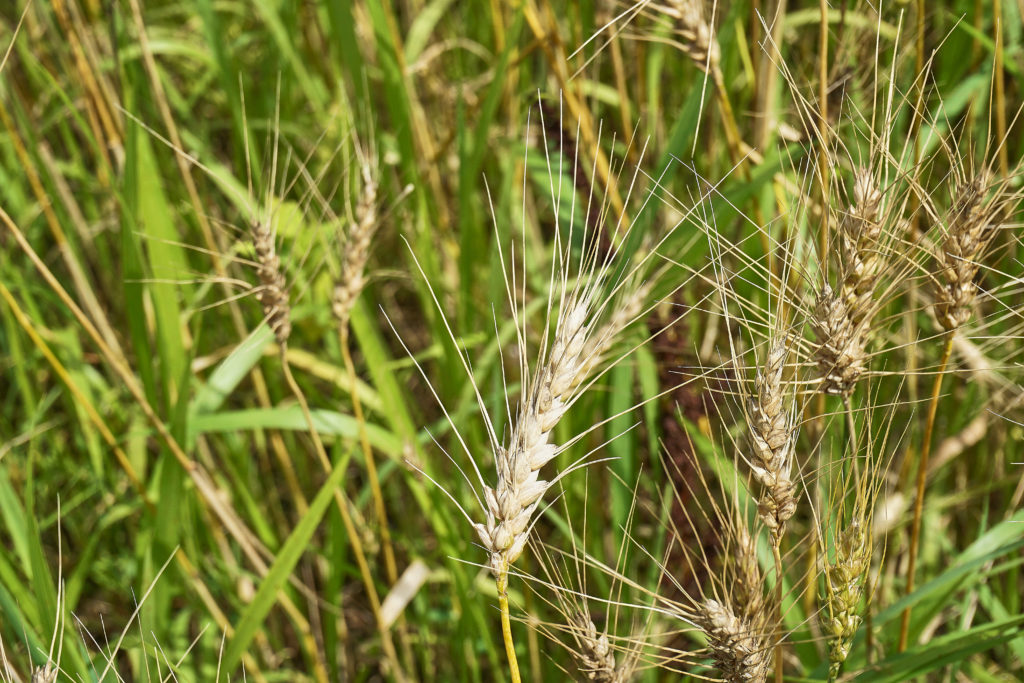 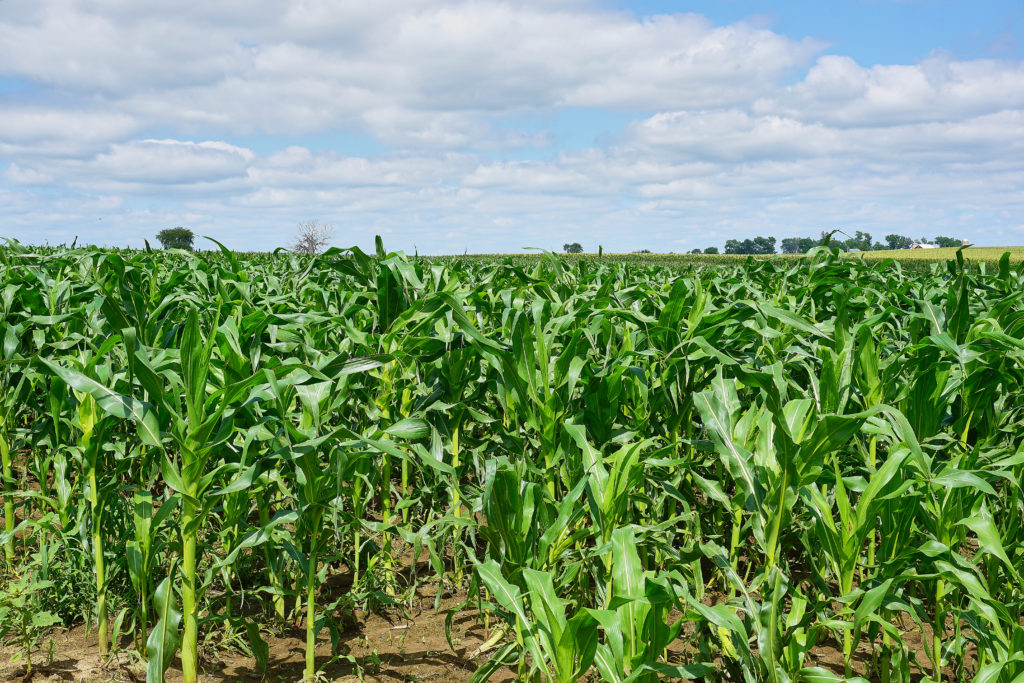 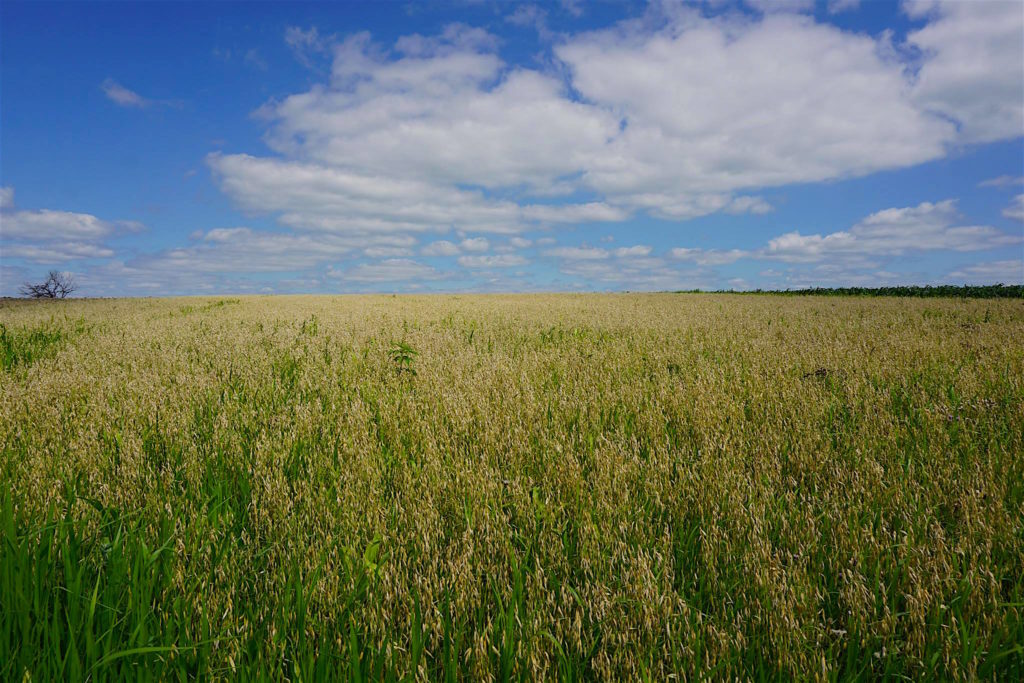 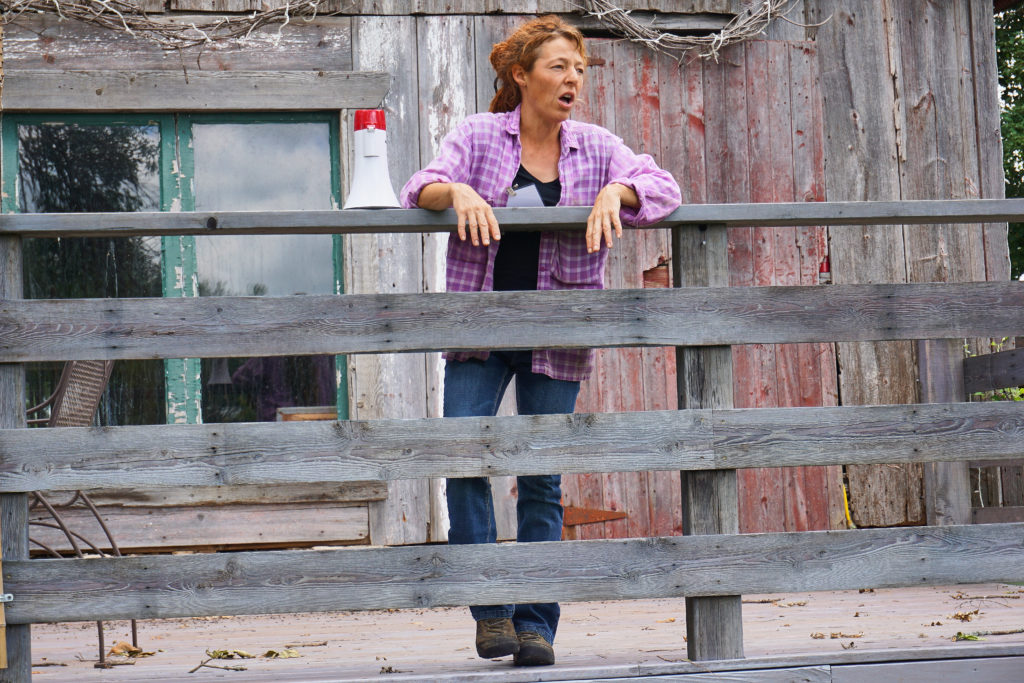 Andrea (Andy) Hazzard of Hazzard Free Farm welcomed guests at the July 24 Organic Field Day organized by MOSES (Midwest Organic and Sustainable Education Service) and the University of Wisconsin-base OGrain (Organic Grain Research and Information Network) from the deck of her house in Pecatonica, Illinois. She operates a small experimental farm on this property, growing most of her crops at her family’s larger farm about six miles away. 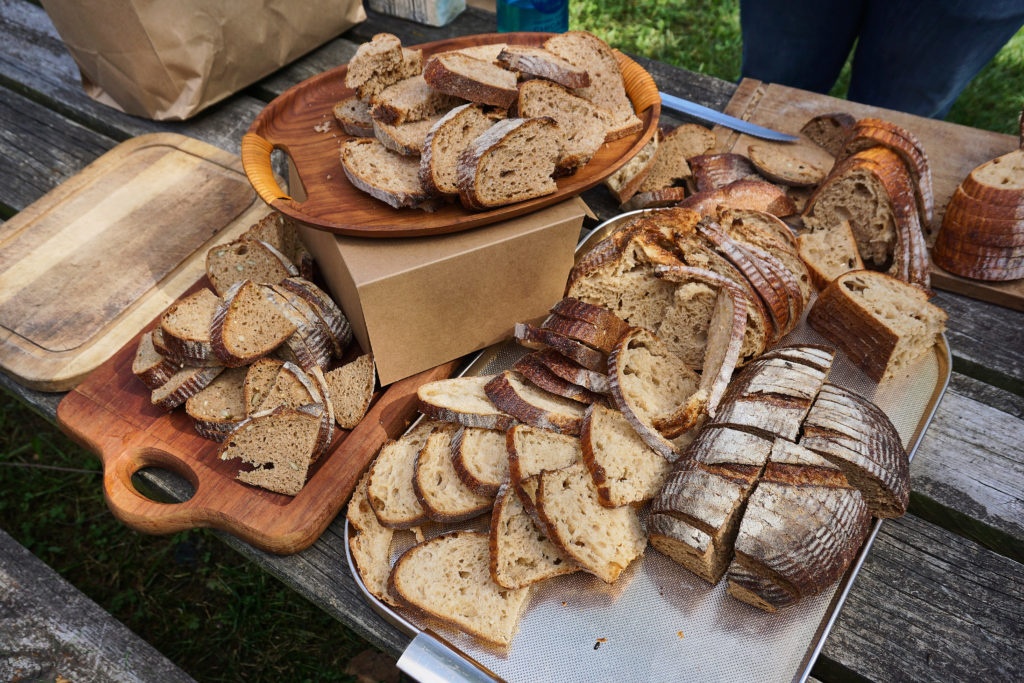 Ellen King, baker-owner of Hewn in Evanston, Illinois, brought a sampler of her delicious breads made from heritage grains to the Organic Field Day at Hazzard Free Farm. Ellen collaborates with Andy Hazzard on a project called the Great Midwestern Bread Experiment. 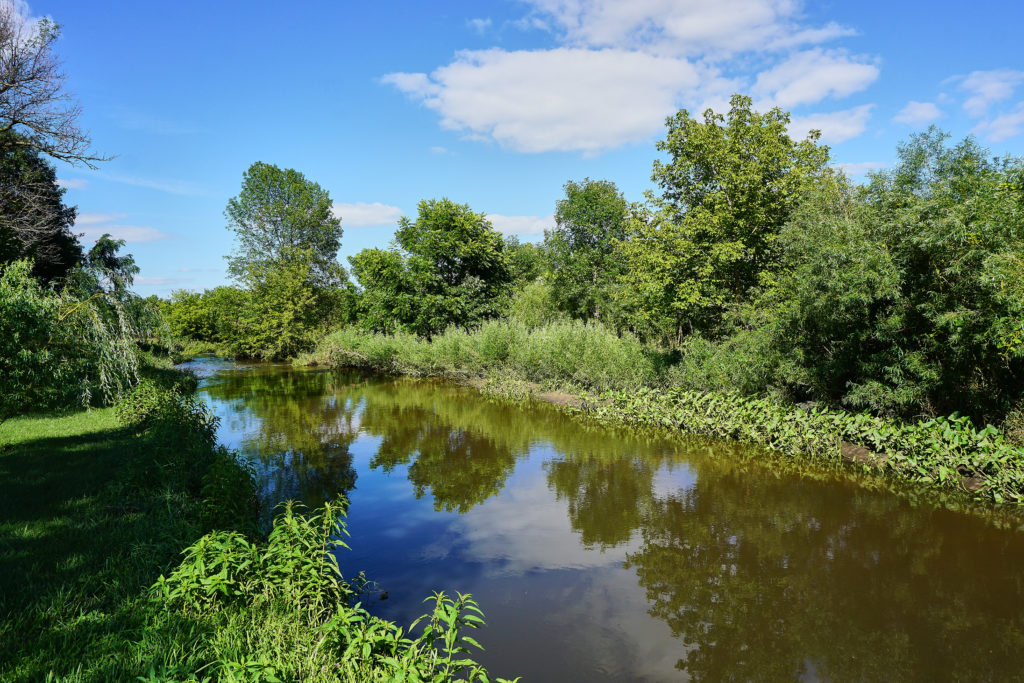 Andy Hazzard told the Organic Field Day participants that playing at this creek, on the land where she now lives, when she was younger helped her connect with nature, which has influenced her work in sustainable farming.

Gretta Got Her Goats

But Gretta grew up on a hobby farm near Ann Arbor, Michigan — her family raised sled dogs, and she owned a goat — and the pull of farm life prompted her to enroll with the Prairie Crossing Farm Business Development Center, in Grayslake north of Chicago, to try her hand at raising goats to produce milk for soap. Her soaps immediately found a following, she needed more goats and more land, and she graduated out of the Prairie Crossing incubator in 2013 when she and Eric found 25 acres of grazable land in Pecatonica that they named Short Leg Farm.

The larger herd and bigger space also enabled the couple to enter the growing sector of goat’s milk cheese, and to add a flock of chickens to produce eggs. Gretta’s Goats products are sold at several farmers markets (including the Sunday market in Chicago’s Logan Square neighborhood) and a growing number of retail outlets.

With their hyper antics, goats are among the most entertaining farm animals, and they enjoy being as pampered and handled (especially when they are small) as house pets. The following are photos from FamilyFarmed’s July 24 visit. 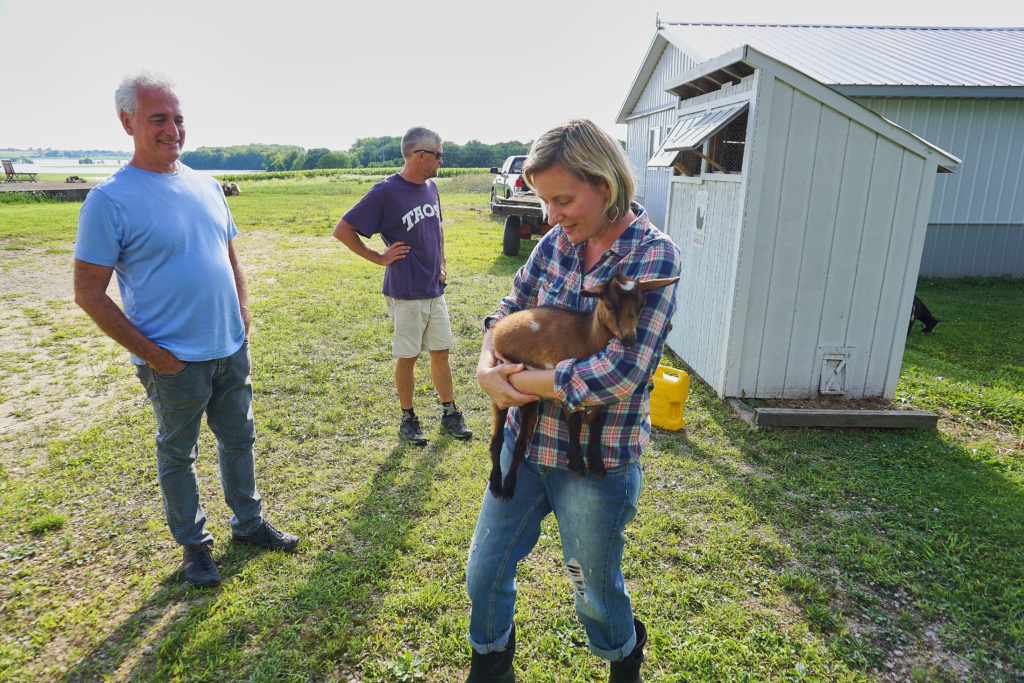 Gretta Winkelbauer (with goat) and husband Eric Strong (purple shirt) run Gretta’s Goats, which produces soap and cheese from the herd of goats they milk on their Short Leg Farm in Pecatonica, Illinois, west of the city of Rockford. FamilyFarmed CEO Jim Slama is on the left. 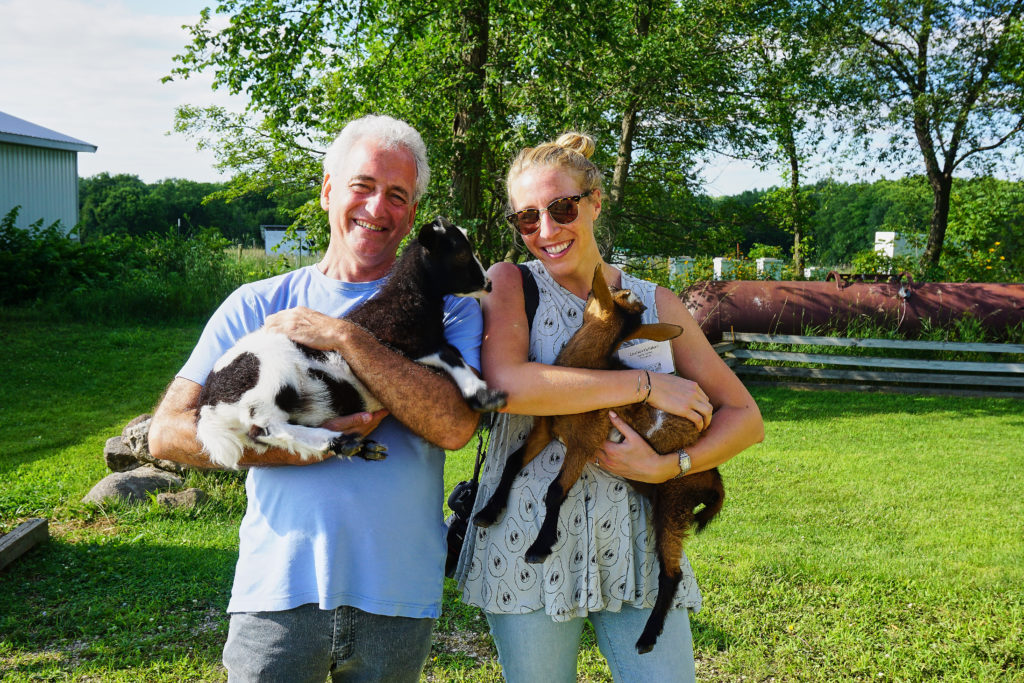 Small goats do not mind being toted around, as FamilyFarmed CEO Jim Slama and Programs Assistant Chelsea Callahan did at Short Leg Farm in Pecatonica, Illinois. Chelsea has a stated ambition to raise goats herself someday. 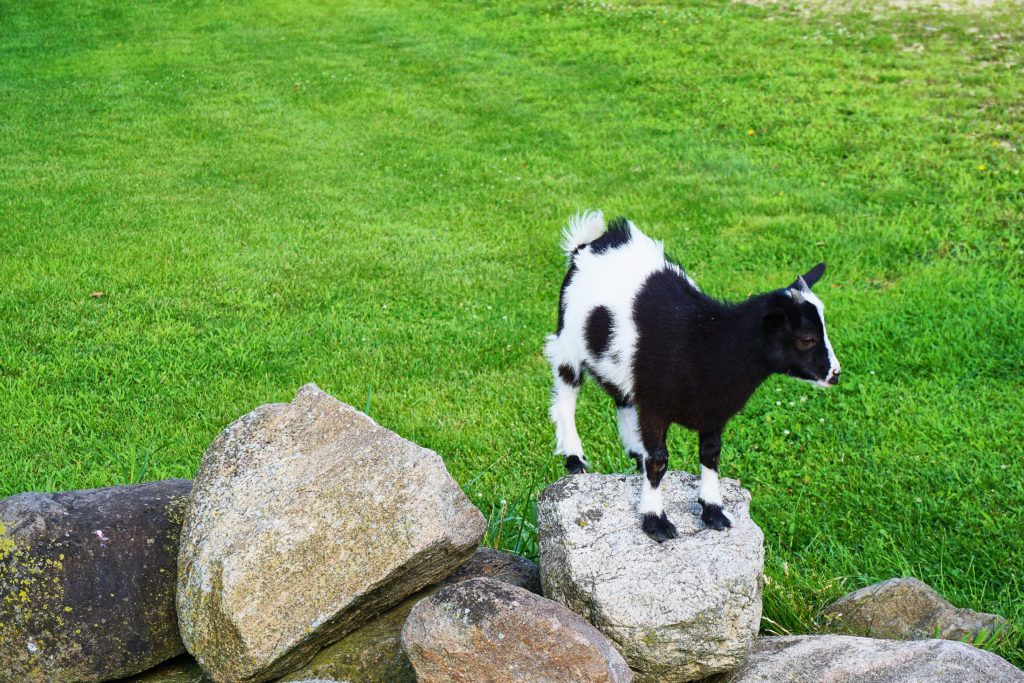 Goats, especially when they are young, love to bound around on just about any available surface. 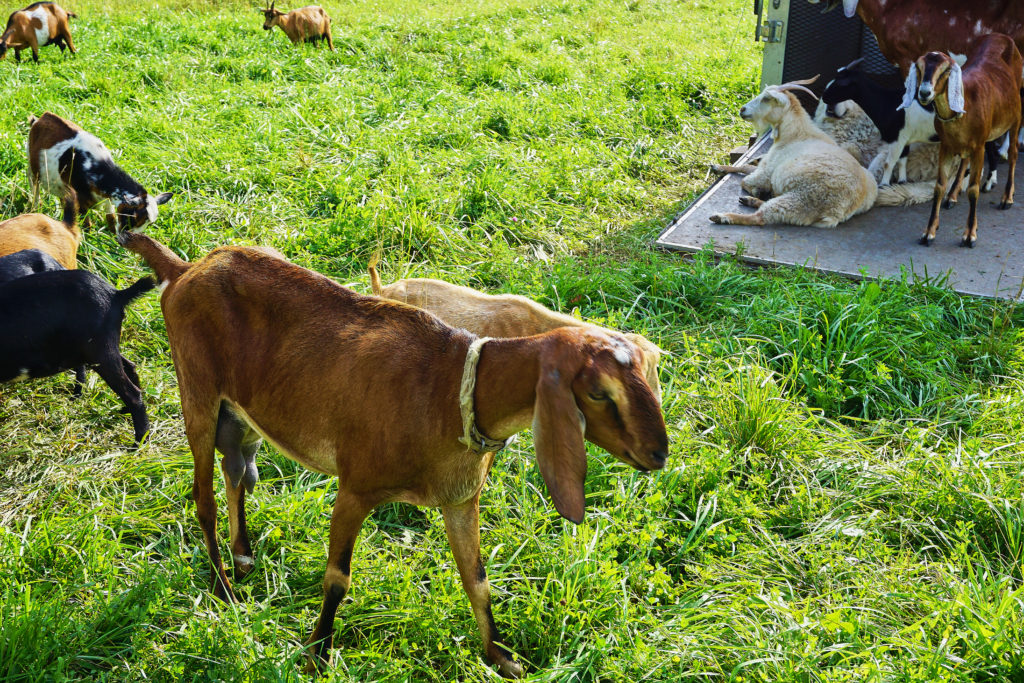 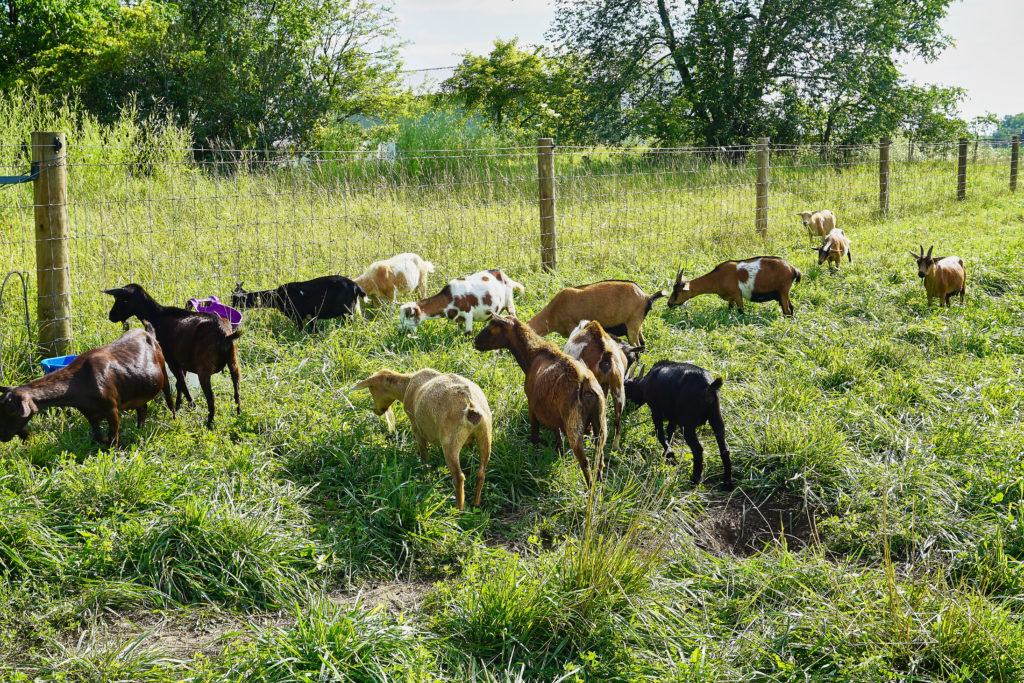 All photos and video by Bob Benenson/©FamilyFarmed.

Correction: Gretta’s Goats has sold its soaps to Girl & The Goat, Chef Stephanie Izard’s flagship restaurant in Chicago’s West Loop, but not cheese as reported in the original version of the story. That reference has been deleted.

1 thought on “The Pride of Pecatonica: Women Farmers, Amber Waves and Happy Goats”