So much amazing food and drink. That’s the simplest way to describe the 2017 Green City Market Chef BBQ, the annual fundraiser for Chicago’s premier farmers market, which brought together a world-class lineup of the city’s farm to table restaurants, along with many of the city’s leading craft breweries and distilleries.

It might be indulgent if the only purpose of this event was a ginormous outdoor feast. But the money raised by Green City Market at the event goes toward its social mission programs, which include double bucks for shoppers using SNAP/LINK food assistance dollars, a satellite market in the underserved Bronzeville community every Wednesday through the growing season, and a broadening palette of food education programs.

These are on top of Green City’s long-established summer market outdoors in Lincoln Park (every Wednesday and Saturday May-October) and winter market (every other Saturday November-April) in the Peggy Notebaert Nature Museum, and newer markets in season on Saturday in the West Loop and on Thursday nights in the new Park at Wrigley when the Cubs do not have home games scheduled.

Please enjoy these photos of just some of the participants at the July 20 BBQ. All photos by Bob Benenson/©FamilyFarmed. 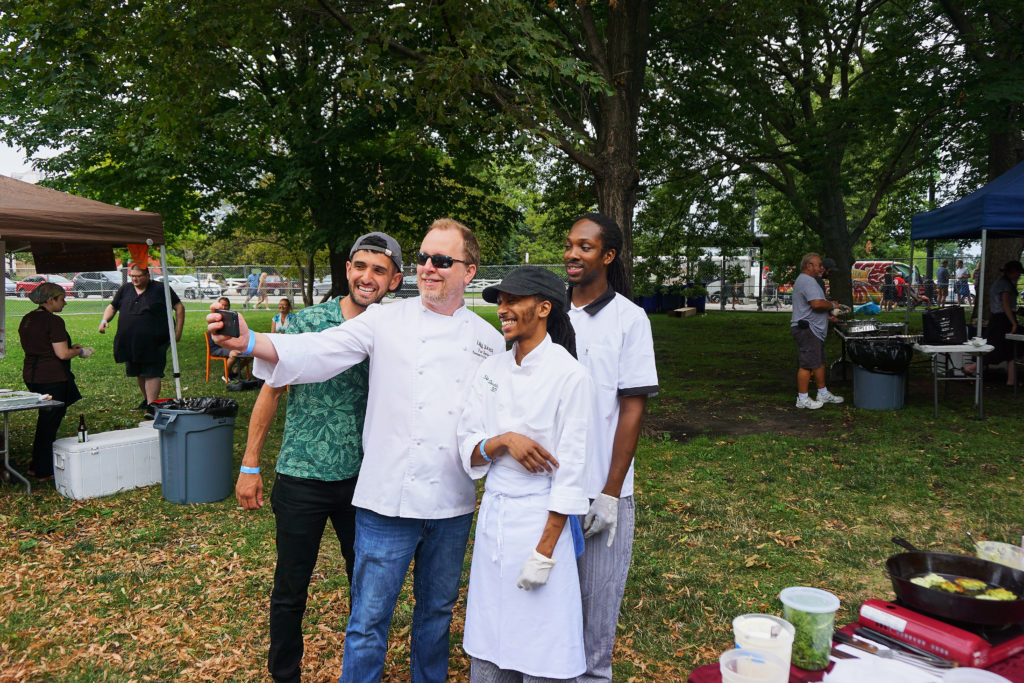 There are few things more “meta” than taking a photo of people taking a selfie, as Paul Fehribach of Chicago’s Big Jones and his team at the Southern-themed restaurant did at the Green City Market Chef BBQ. Paul’s dedication to sustainability and his social values prompted FamilyFarmed to present him with its 2015 Good Food Chef of the Year Award. 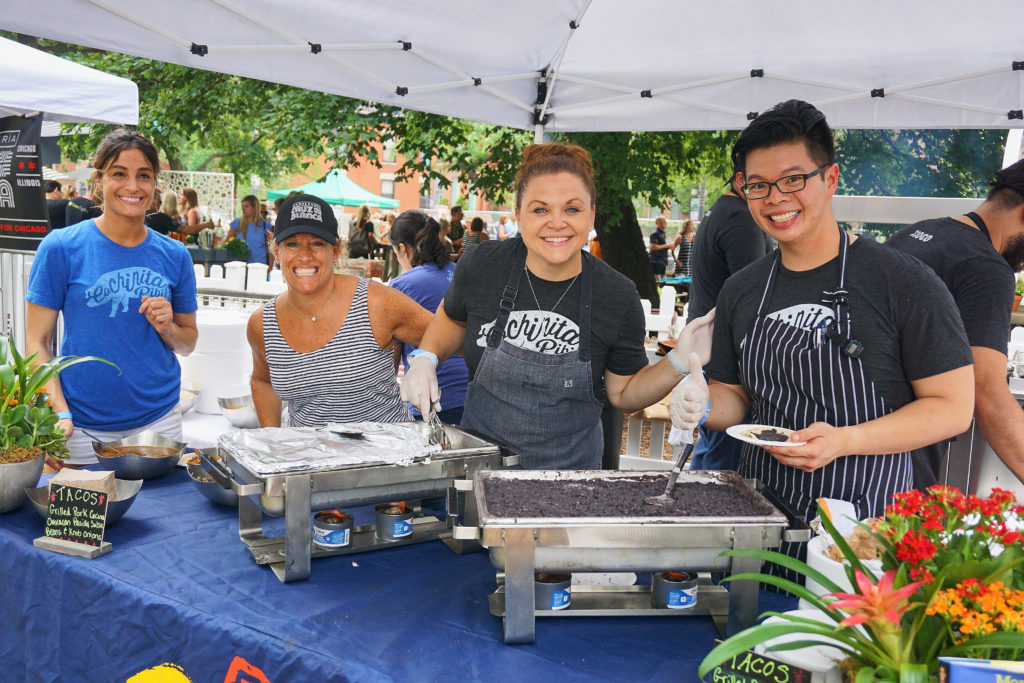 Attendees were as happy with the grilled pork cecina tacos served by Chef Rick Bayless’ Frontera restaurant team as they were to serve them. FamilyFarmed and Rick’s Frontera Farmer Foundation co-produced the Frontera 30th Anniversary Celebration fundraiser on April 30 at the Art Institute of Chicago, which netted $140,000 for the two nonprofits’ efforts to build a better food system. 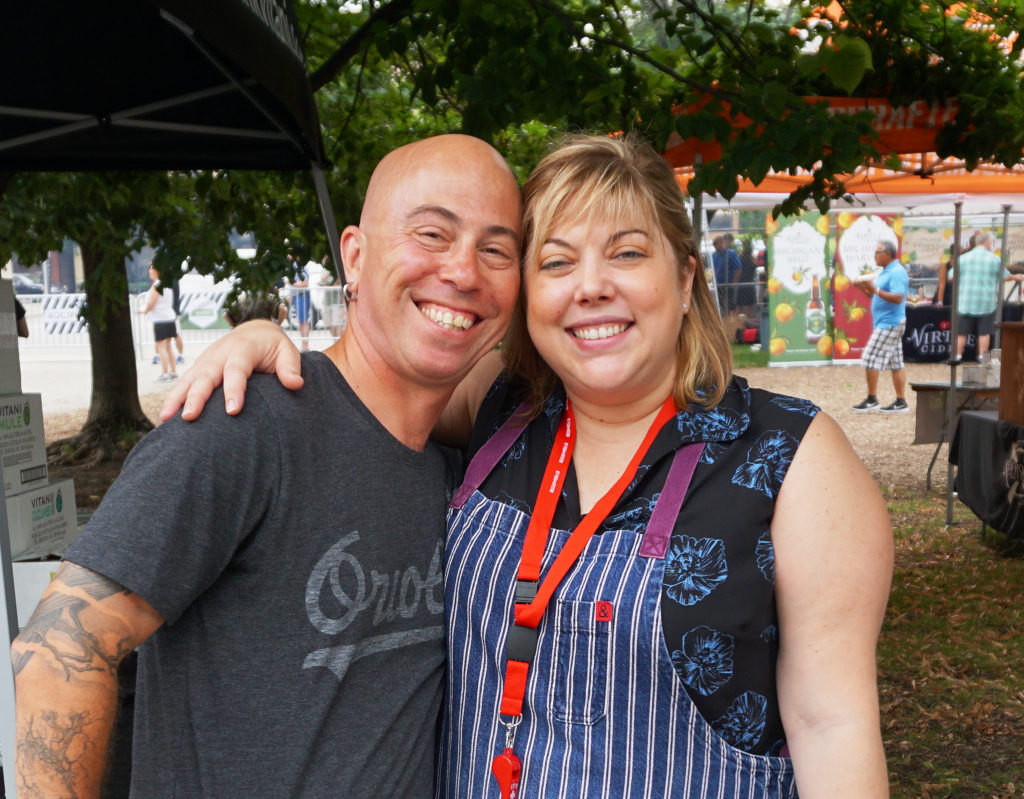 Sarah Grueneberg (right), who is having a celebrated year at Monteverde in Chicago’s West Loop, shares a moment with Cleetus Friedman, an early leader in the city’s farm to table movement and one of the first chefs to collaborate with the city’s burgeoning craft beer sector. Sarah in May received the James Beard Foundation Award for Best Chef: Great Lakes. Cleetus is developing the Lakefront restaurant in the Theater on the Lake near Fullerton Beach, which is being completely refurbished. 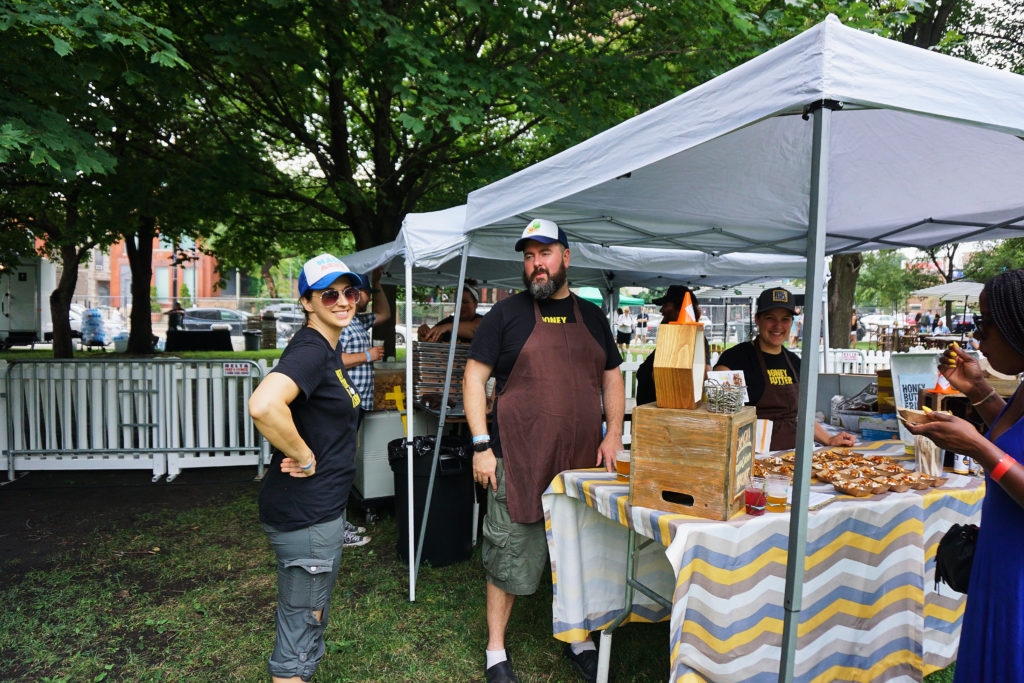 Honey Butter Fried Chicken has been one of Chicago’s most popular fast-casual (and Good Food) restaurants since it was opened in 2013 by chefs Christine Cikowski (left) and Josh Kulp (center). FamilyFarmed honored them with its 2017 Good Food Chef of the Year Award at its Good Food Festival, for the quality of their food, their dedication to sustainability and their strong social values. 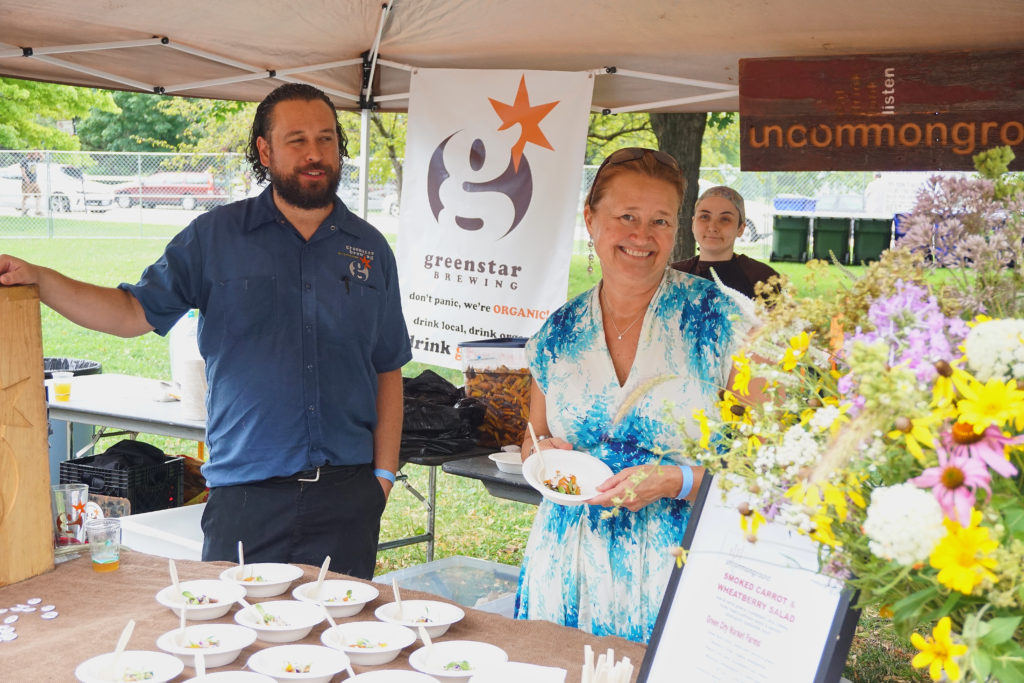 Helen Cameron (right) and husband Michael Cameron (not in photo) opened Uncommon Ground on Clark Street near Wrigley Field in 1991 as one of the pioneering farm to table restaurants, and later created the organic rooftop farm at their second location on Chicago’s Far North Side. Martin Coad (left) is brewmaster for Greenstar, Uncommon Ground’s organic brewery, located at the Clark Street location. 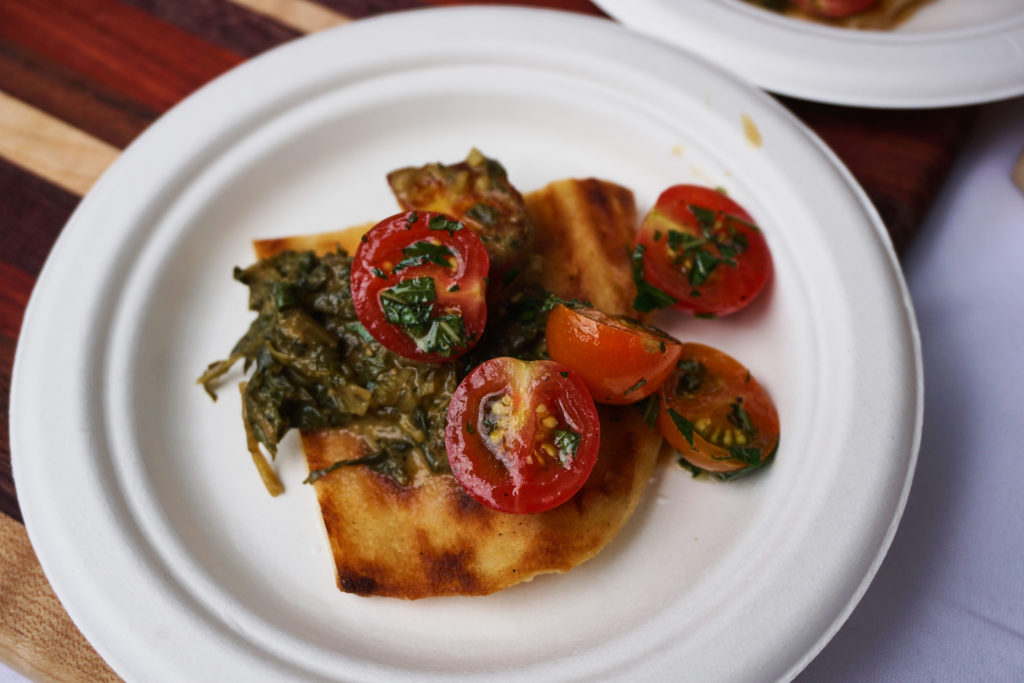 Chef Paul Virant’s Vie restaurant in suburban Western Springs was an early leader in Chicago’s farm to table movement. This version of the Indian dish saag paneer, made with fermented ramps and market greens, was Vie’s contribution to the Green City Market Chef BBQ. 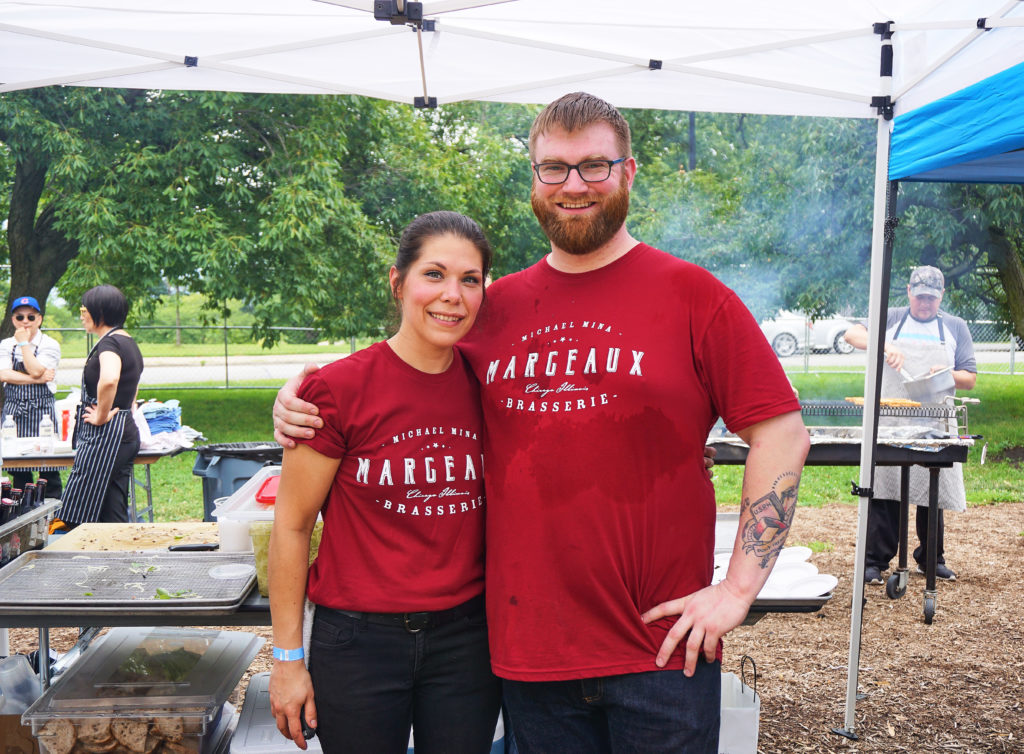 One of the best things about the annual Green City Market Chef BBQ is getting to sample the fare from some of Chicago’s hottest new restaurants. One of these is Margeaux Brasserie, the new restaurant in Chicago’s Waldorf Astoria Hotel, opened by Chef Michael Mina’s San Francisco-based restaurant group. Chicago native Brent Balika (right in photo) is executive chef. Ashley Torto (left) is the pastry chef who also heads the team at the hotel’s Petit Margeaux patisserie. 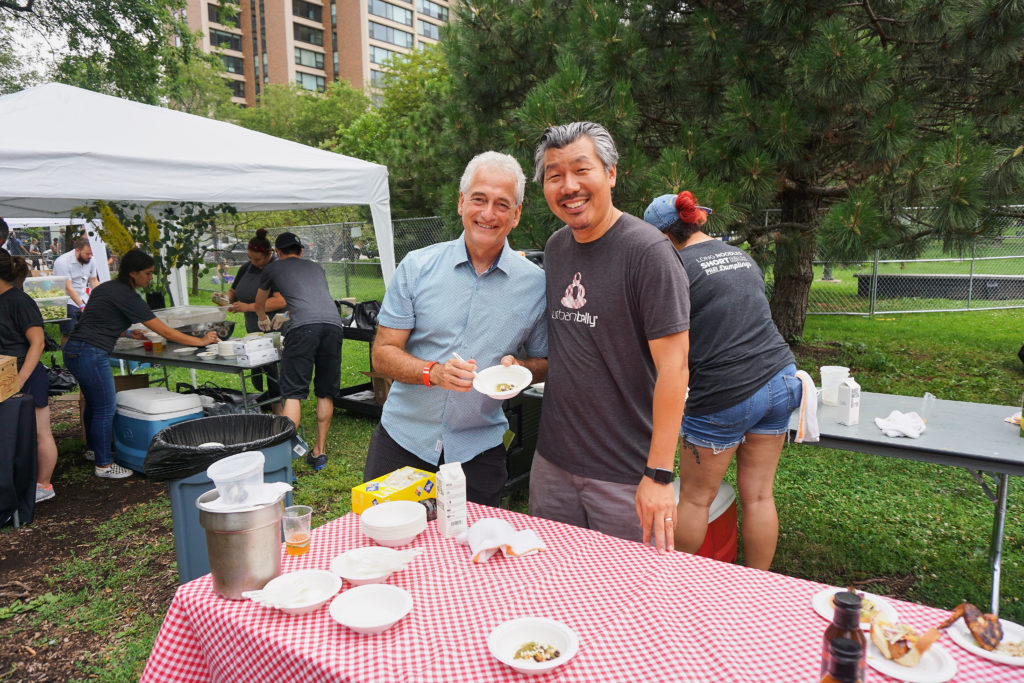 Bill Kim (right, with FamilyFarmed’s Jim Slama) applies his innovative take to Asian barbecue at bellyQ in the West Loop. 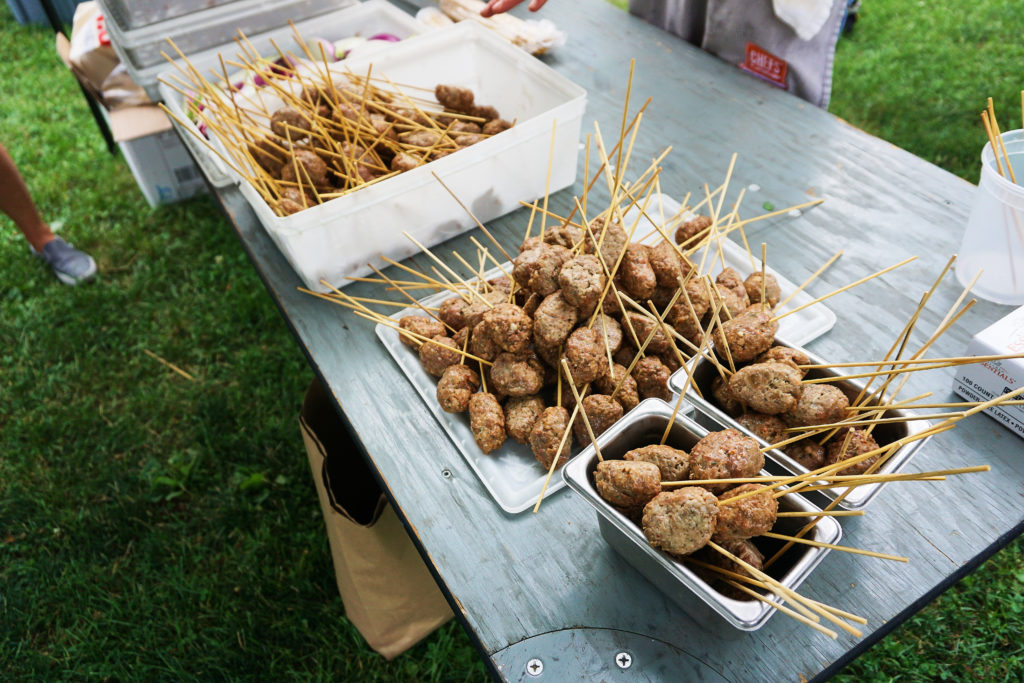 The Kitchen, located on the north bank of the Chicago River in the historic red-brick Reid Murdoch building, is the Chicago outpost of the Colorado-based restaurant group of the same name. Chef Johnny Anderes created these grilled turkey and beef brochettes for the Green City Market Chef BBQ. The Kitchen Community, a nonprofit spinoff created by entrepreneur Kimbal Musk, has installed nearly 400 school gardens across the country. 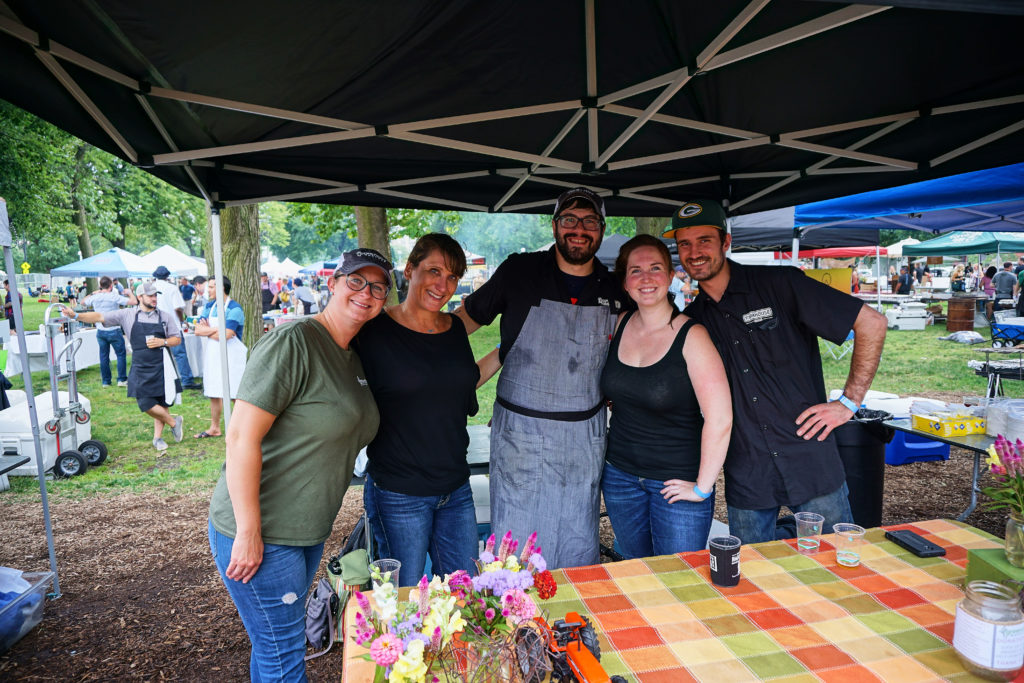 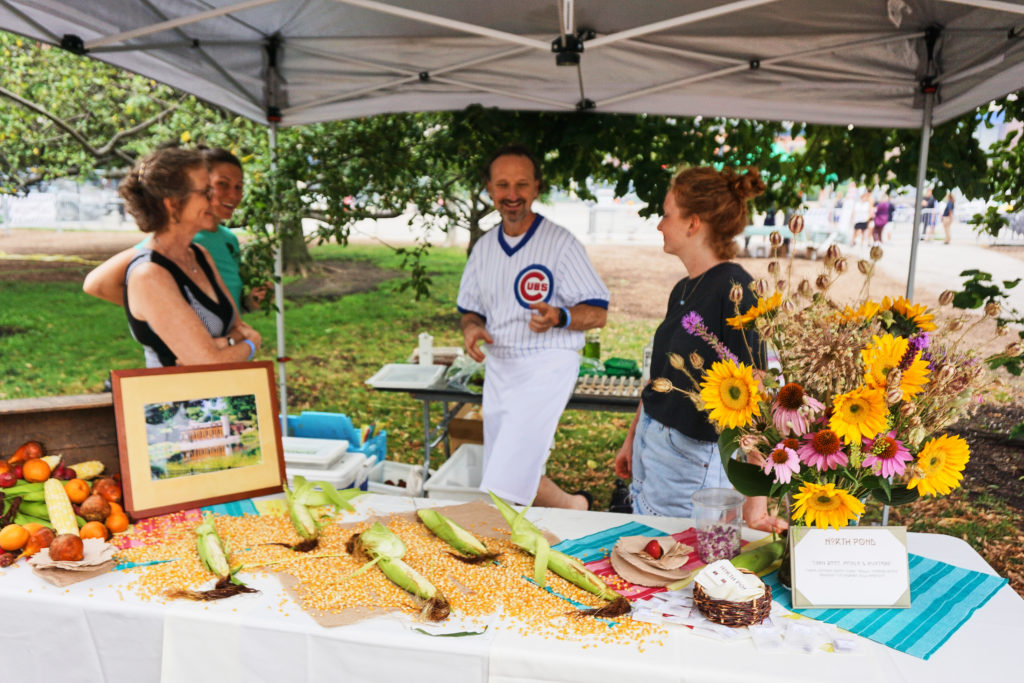 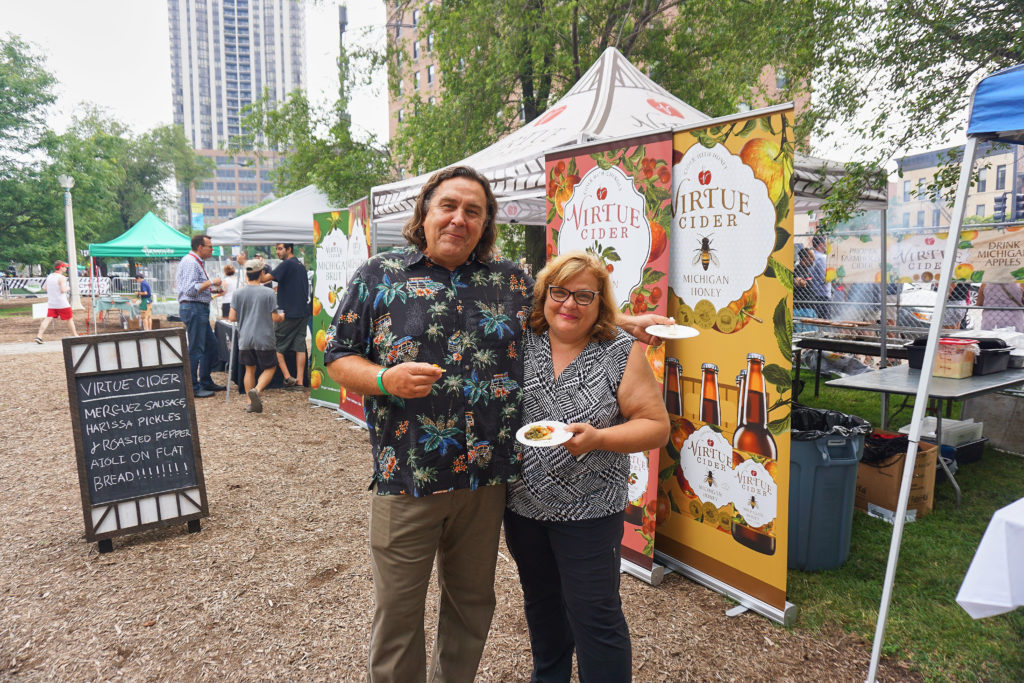 The chefs at the Green City Market BBQ use ingredients produced by the market’s farmer-vendors, and many of those vendors enjoy the feast. They included Dave and Denise Dyrek of Michigan’s Leaning Shed Farm, whose famous tomatoes are just coming into season. 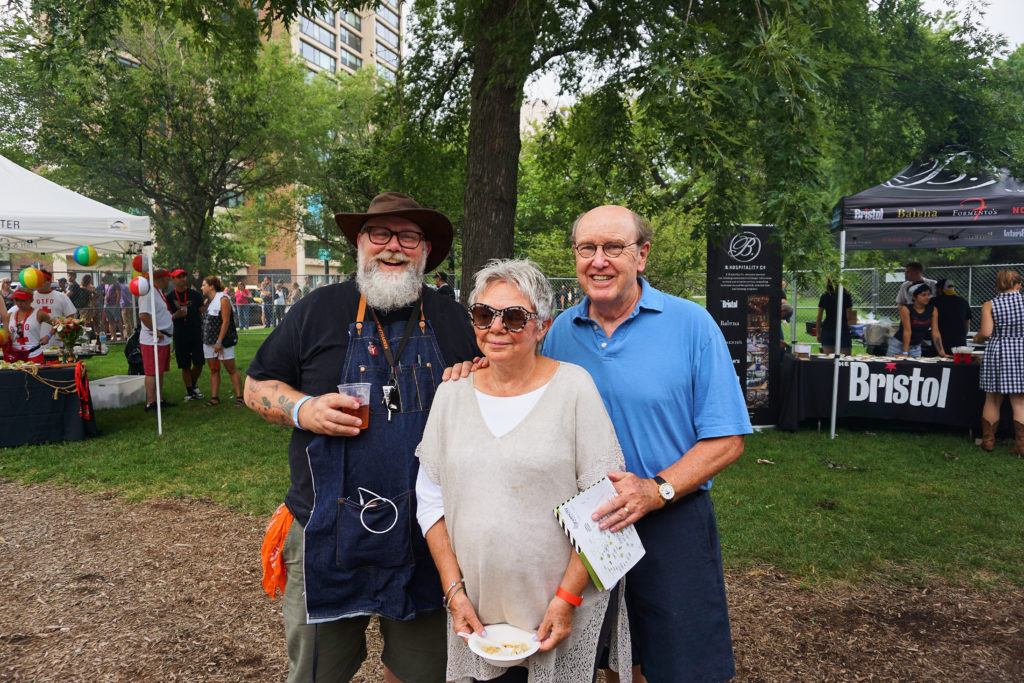 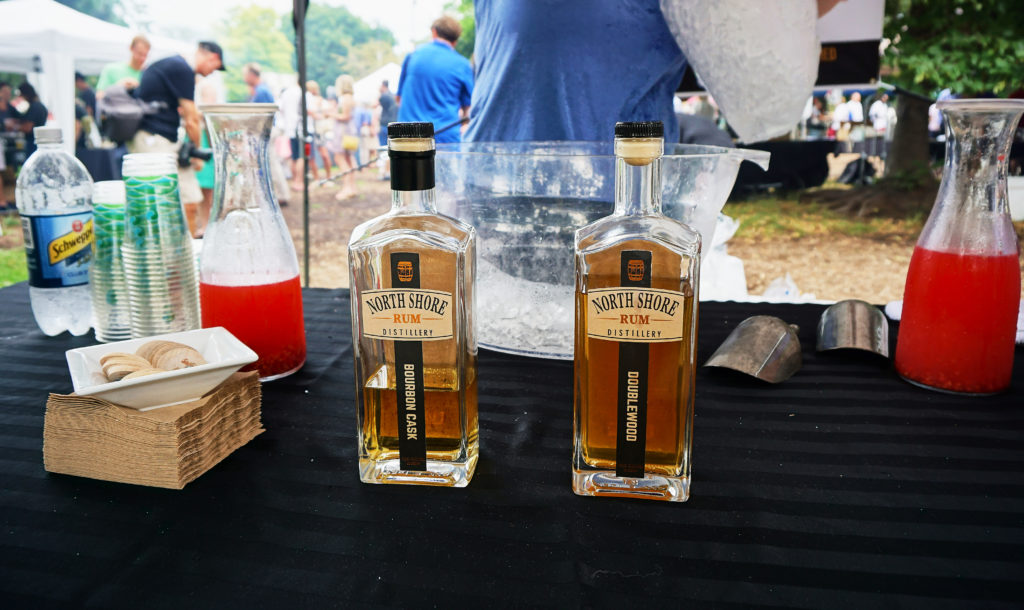 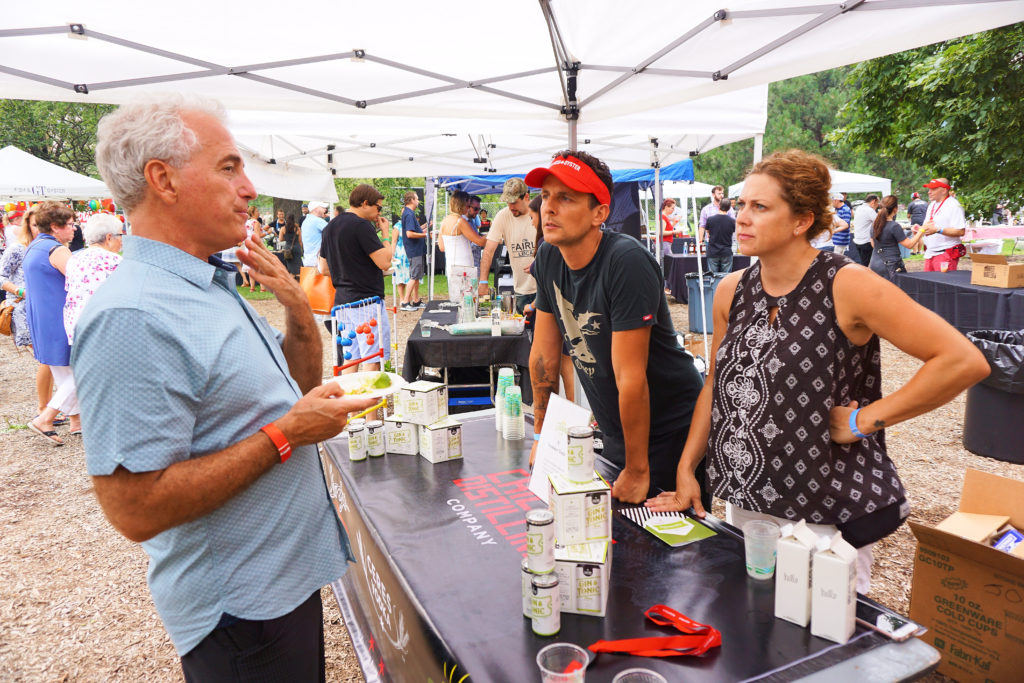 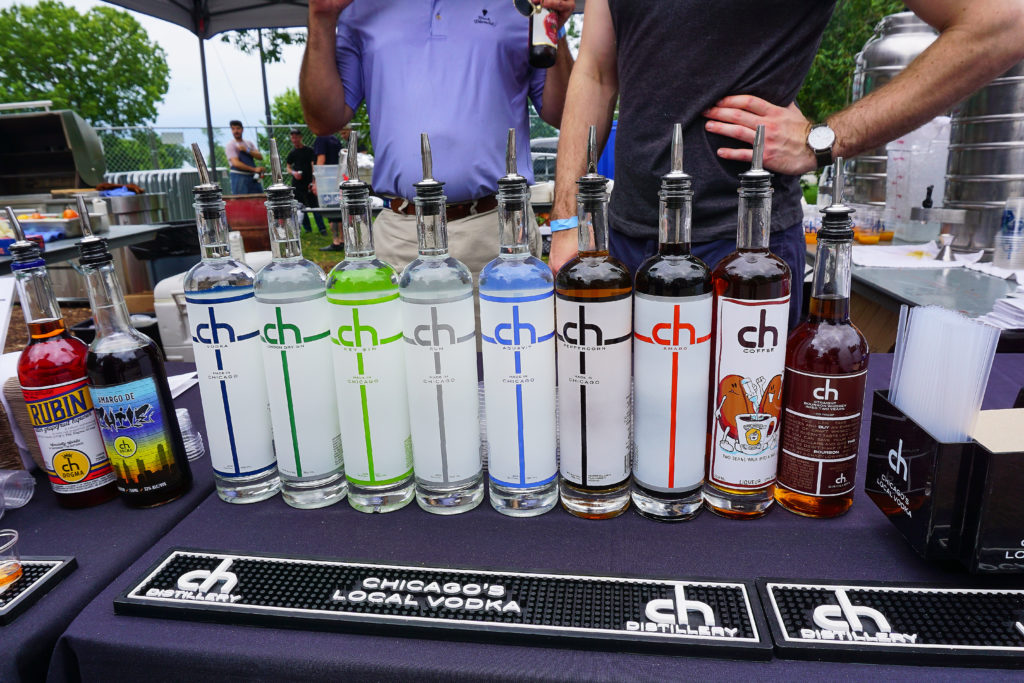 Local distilleries featured at the 2017 Green City Market Chef BBQ included North Shore of suburban Lake Bluff, which was founded in 2005 as the first craft distillery in Illinois since Prohibition; Chicago Distilling, which uses all organic grain and recently released its first canned cocktail with house-made gin and tonic (in the photo, co-owners Jay and Noelle DiPrizio chat with FamilyFarmed CEO Jim Slama); and CH, which recently opened a big distilling plant in Chicago’s Pilsen neighborhood to supplement its original distillery-restaurant in the West Loop. 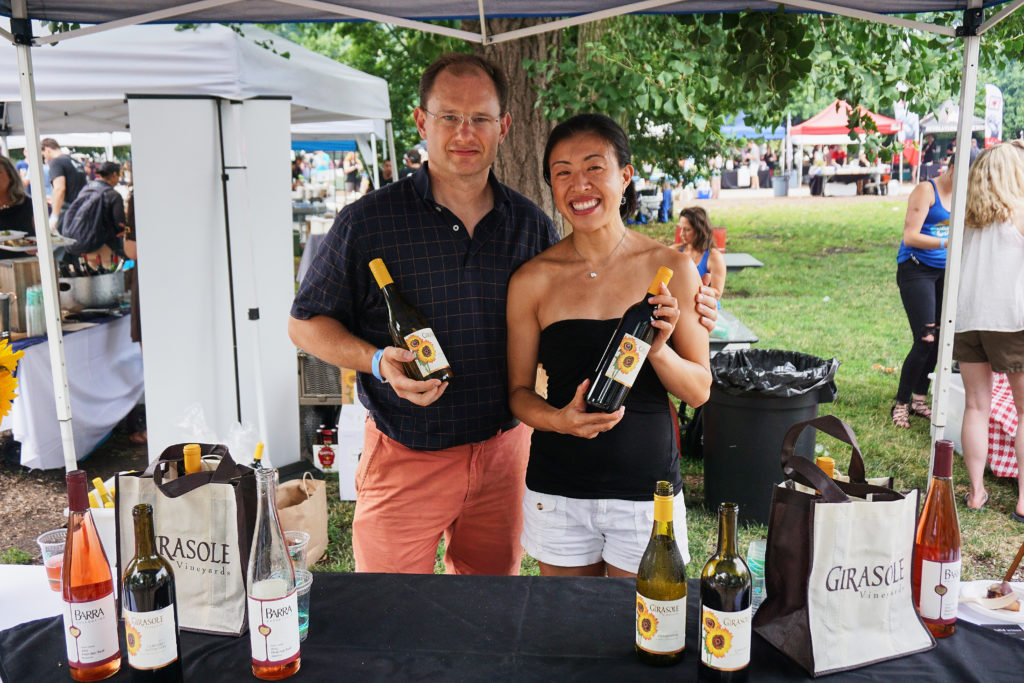 Kim Jung (right), a co-owner of Chicago’s Rumi Spice, helped out at the Girasole wine table. Rumi Spice  sells saffron from Afghanistan, paying farmers more than they can get growing poppies for the deadly opium trade and employing women in their processing plant. Kim and her co-owners are U.S. Army veterans of the war in Afghanistan.