Good Food advocates are always on the lookout for signs that big industrial producers are responding to the rising consumer demand for food produced using sustainable and humane practices. So it was not unnoticed when Tyson Foods, the nation’s largest producer of poultry and other meats, hired its first chief sustainability officer last April, and when Tom Hayes, the company’s president and CEO, stated in September that sustainability will play a major role in the company’s strategic planning.

Now a campaign, called Clean It Up, Tyson!, has emerged to press the corporation to live up to that commitment. Organized by the environmentalist groups Green Corps and Mighty Earth, the campaign has sent a letter to Hayes at Tyson’s Springdale, Arkansas, headquarters citing its  “unique opportunity to reduce the environmental consequences of meat and lead the industry towards better farming practices.” FamilyFarmed is one of more than four dozen signatories to the letter.

The campaign is urging the company to reduce nitrate runoff from farms in its network, which pollutes the nation’s rivers and is, according to much scientific research, the largest contributor to a huge “dead zone” in the Gulf of Mexico. “The bulk of this pollution comes from the vast quantities of animal feed produced to raise meat, and are a result of practices driving high soil erosion rates, loss of natural landscape buffers, and excess fertilizer application,” reads the letter sent to Tyson Foods.

The campaign also held a news conference on Oct. 11 outside Tyson’s offices in Chicago’s West Loop neighborhood to highlight a petition drive in support of its efforts. “Americans should not have to choose between producing food and having healthy clean water,” said Lucia von Reusner, Campaign Director for Mighty Earth. “Our nation’s largest meat companies shape our food system on a massive scale, and can implement the solutions needed to make meat less polluting.” 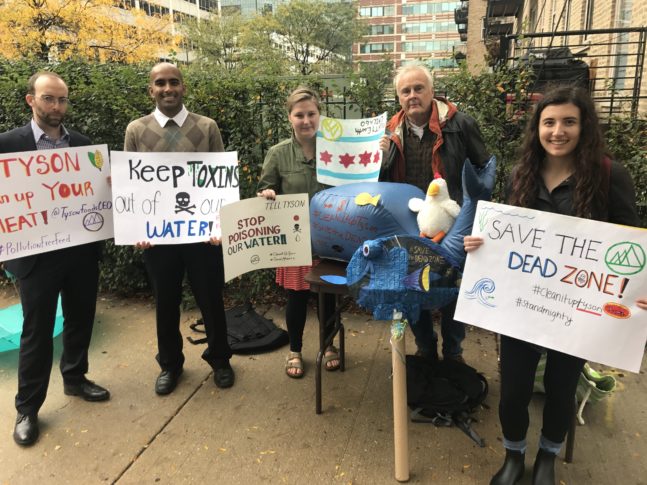 Activists in the Clean It Up, Tyson! campaign at the Oct. 11 news conference held outside Tyson Foods’ Chicago offices. Photo courtesy of Mighty Earth.

The campaign is seeking to persuade Tyson to announce a sustainable agriculture policy that ensures all of its suppliers adhere to the following best practices for responsible feed production and sourcing. These include cover cropping and conservation tillage practices to prevent soil erosion; protecting and restoring natural landscape buffers to absorb runoff; optimizing fertilizer application to prevent excess runoff; incorporation of rotationally raised small grains into the feed rotations; and a moratorium on further clearance of native ecosystems such as the iconic American prairie.

“I have been trying to protect water from the effects of large livestock production for nearly 20 years,” said Tony Ends, owner of Scotch Hill Farm in Brodhead, Wisconsin as a speaker at the Oct. 11 event. “It’s time for Tyson and our large food manufacturers to help protect our water, our public health too.”

The campaign organizers emphasize that they are not singling Tyson out, but rather asking that the company live up to its own words about sustainability. “You have pledged to ‘place sustainability at the center of the company’s future plans’ and show ‘how much good food can do.’ We applaud these statements, and believe a commitment to ensuring feed is sustainably sourced is crucial for demonstrating the company’s ambition,” reads the letter sent to Tyson.

This point was reinforced at the rally by Robert Hirschfeld of The Prairie Rivers Network. “Tyson has a great opportunity to meet its sustainability goals by working with farms in its supply chain to adopt a set of conservation practices,” he said. “Through the Illinois Nutrient Reduction Loss Strategy, the state is already encouraging farmers to integrate these practices into their farms. Tyson would make a strong partner in this effort.”