National publications have described Chicago as the nation’s leading city for urban agriculture. So it should not be a surprise that FamilyFarmed — an avid supporter of urban farming as part of our efforts to advance the Good Food movement — stages an Urban Ag Bus Tour twice a year to introduce people in the community to outstanding urban farms.

But nothing will stay a local food advocate from making the rounds of urban farms. People piled into the bus, and thoroughly enjoyed the visits to Garfield Produce, Chicago Patchwork Farms and the rooftop farm at McCormick Place, the city’s (and nation’s) biggest convention center. Giant puddles be damned.

The day began at Kitchfix‘s retail store and coffee house in downtown Chicago’s Gold Coast neighborhood. Kitchfix makes prepared meals for takeout or delivery, as well as a grain-free granola sold in many local grocery stores, and is transparent about its ingredients and its efforts to use organic and local products as much as possible. Founded and owned by Chef Josh Katt, Kitchfix also is a graduate of FamilyFarmed’s Good Food Accelerator program. 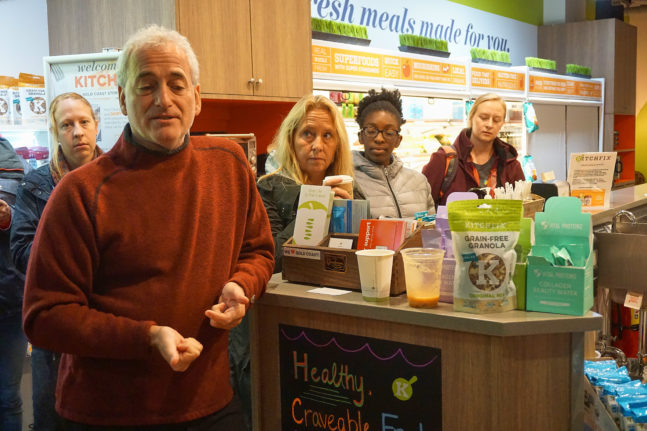 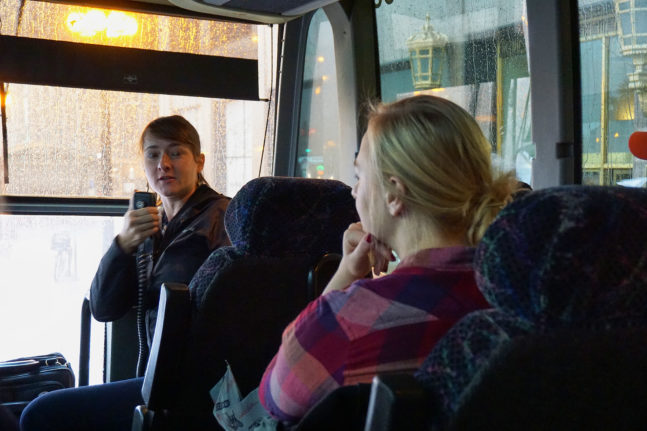 The first stop was Garfield Produce, a start-up indoor growing company located in East Garfield Park, a West Side Chicago community that has undergone a long-term loss of jobs, opportunity and population. Darius Jones, a principal in Garfield Produce, could hardly be better placed to express the social consequences of this decline and the need for businesses such as his.

Darius was headed down the wrong path as a teenager and was incarcerated in Cook County Jail. But he was fortunate to enroll in the Cook County Sheriff’s Garden Program, in which non-violent offenders grow vegetables and gain job skills. Darius engaged so enthusiastically that he was featured in a 2011 New York Times article about the program, and he enrolled in the Windy City Harvest farmer training program run by the Chicago Botanic Garden. Windy City Harvest maintains the rooftop farm at McCormick Place, and by fall of 2013, Darius was the farm manager, a position he held for two years before leaving to help start Garfield Produce.

During the bus tour’s visit to Garfield Produce, Darius provided an informative presentation on indoor hydroponic growing and the variety of sprouts that the company grows. 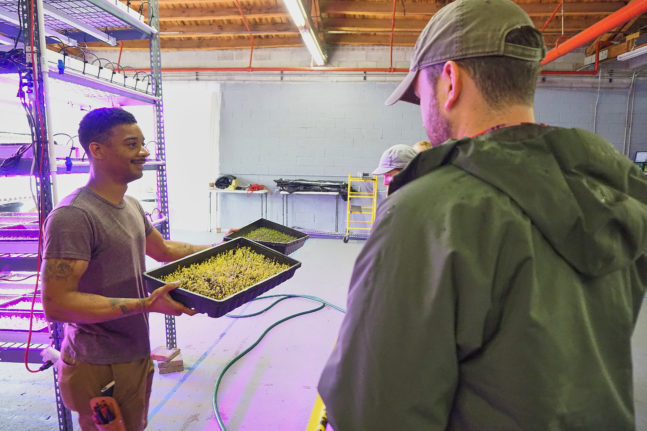 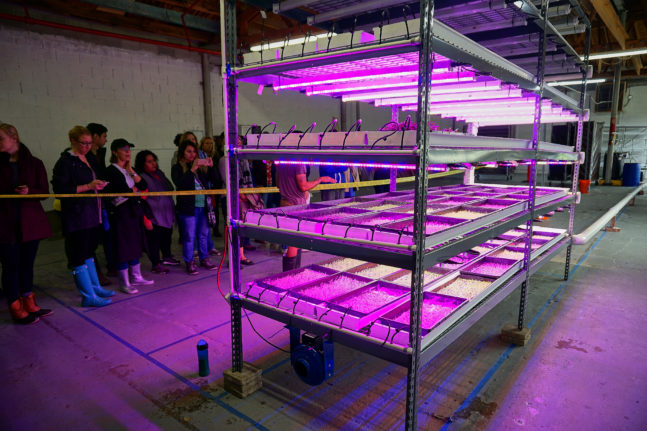 Chicago Patchwork Farms, the next stop, is located just about a mile from Garfield Produce in Humboldt Park, another neighborhood that has seen tough times but is showing signs of economic recovery. The bus tour participants sloshed through the growing fields at this outdoor farm.

Here is how Patchwork Farms website describes its mission: “We remediate vacant land on Chicago’s south and west sides; neighborhoods that are economically deprived and environmentally distressed, providing space in the community for outdoor gatherings, native pollinator habitat, and food crops. The farm’s diverse operation produces an extensive variety of vegetables, as well as eggs, medicinal herbs, preserved foods, honey, cut flowers, and a compost drop-off program. We host a high-demand 50-member sliding scale CSA pickup, and a pay-what-you-can farm stand – with the majority of our visitors walking or biking to the farm.” 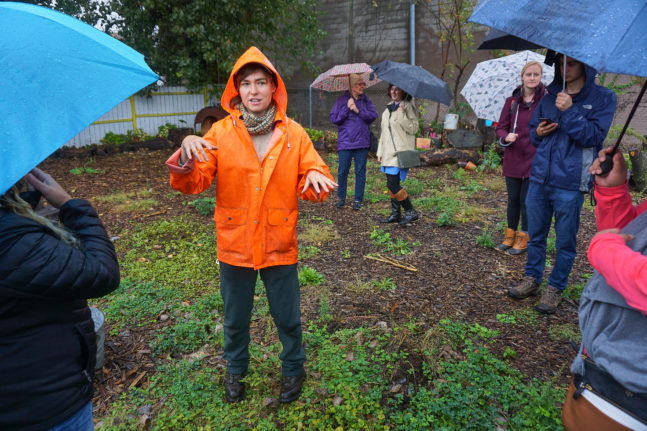 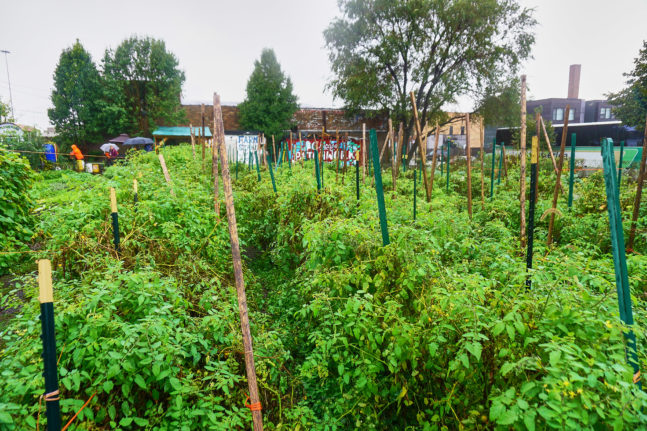 The final stop of the Fall Urban Ag Bus Tour was at McCormick Place. The rooftop farm was established as a partnership of the Chicago Botanic Garden and SAVOR…Chicago, the catering company that feeds many thousands of convention attendees each year and has played a major role in the giant facility’s sustainability efforts. McCormick Place annually uses several tons of produce from the rooftop, along with honey from the beehives located there.

Kelly Larsen, Windy City Harvest’s operations director, and other staff from the non-profit organization were on hand to discuss how the farm works. They also described how, at the request of the McCormick Place chefs, they are growing a number of heirloom vegetable varieties designated by the Slow Food organization as part of their “Ark of Taste.” 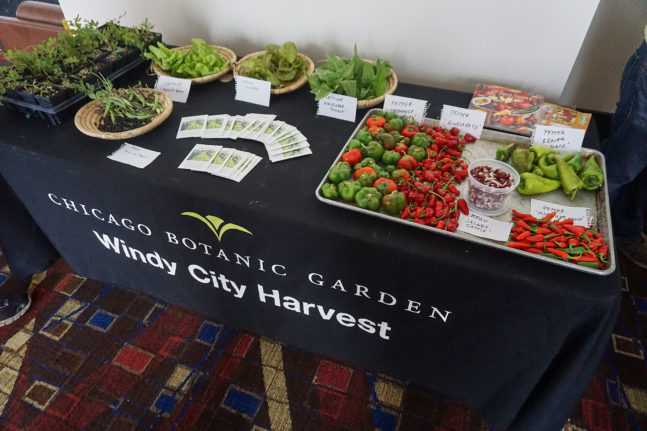 The McCormick Place rooftop farm in Chicago is producing these heirloom crops designated by Slow Food as part of its “Ark of Taste” program. Photo: Bob Benenson/FamilyFarmed 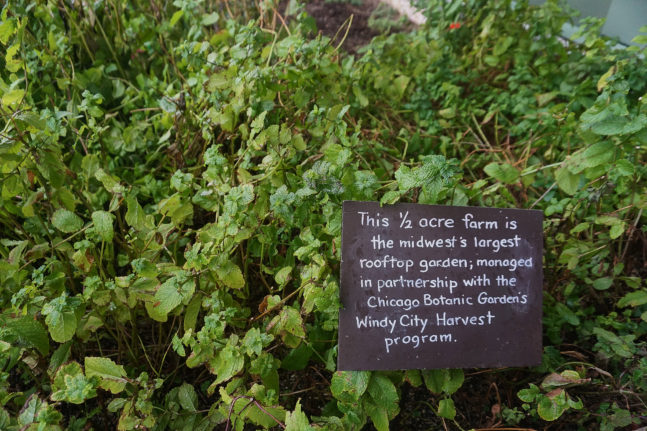