As a pioneering organic farmer, an academic at Iowa State University’s Leopold Center for Sustainable Agriculture, and president of New York’s Stone Barns Center for Food and Agriculture, Fred Kirschenmann is both a practical and intellectual leader in the Good Food movement.

In this second of two excerpted transcripts from a recent interview with Good Food on Every Table, Kirschenmann juxtaposes the risks inherent in our current industrialized food system, as entrenched interests try to hold their ground, with the hopeful signs that a true movement of “food citizens” is on the rise and will achieve positive change in time to prevent a crash.

In yesterday’s Part I (click here), Kirschenmann described the origins of the Stone Barns Center, the non-profit organization’s training program for young beginning farmers, and his own family’s experience with the rise of artificial fertilizers and other conventional agriculture practices following World War II.

A slide show of photos taken at Stone Barns can be found here. The q-and-a follows the photo of one of the European-style barns, constructed on the historic Rockefeller estate in Pocantico Hills, N.Y., that house the center and give it its name. 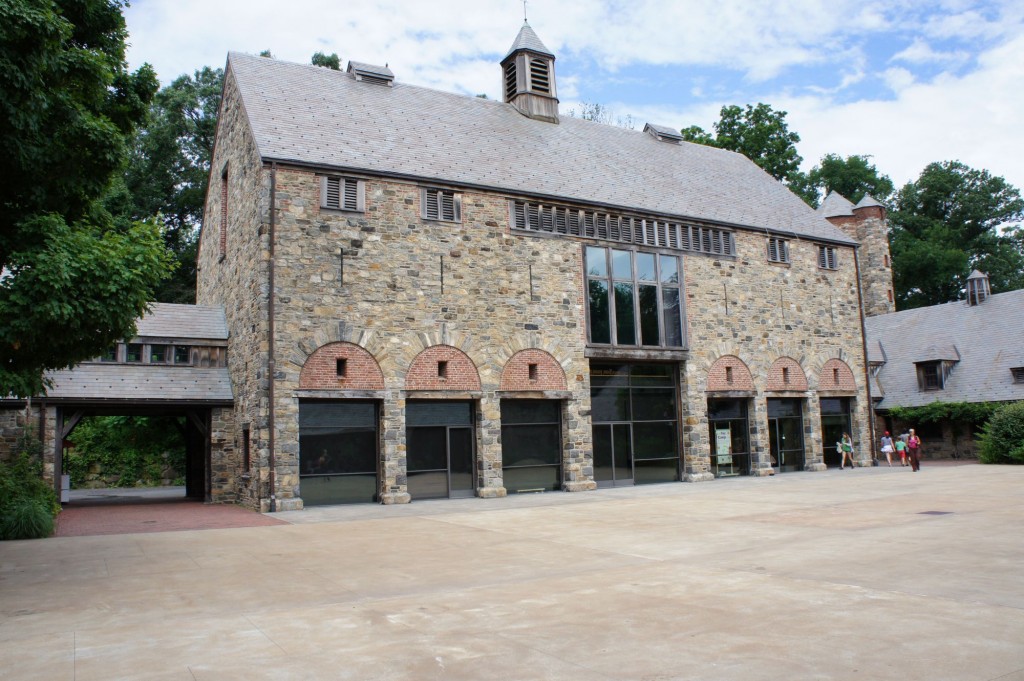 Q: What are the biggest challenges in moving from the dominant conventional agriculture system to one that emphasizes sustainability?

Kirschenmann: I don’t mean this in a critical way, the farmers, the input suppliers, the food processors, all of whom have made huge, huge investments in this current industrial food system, quite naturally they’re going to do everything to defend it, to keep it in place to get as much political pressure to keep USDA supporting their issues. It’s quite understandable that’s going to happen. But the thing the rest of us in the larger food culture have to keep in mind is that the industrial food system, by design, is very short-lived [because it relies to such a great extent on fossil fuels and other non-renewable resources]…

The question we really need to be focusing on now and recognizing is that the industrial food system is going to continue to try to keep that system going as long as possible, and at some point we’re going to hit the possibility of a real crash. Then you have to add climate change to the mix now. How can we come up with the alternative food system that we’re going to have to transition to? If we’re lucky, we won’t go ‘til the crash….

There’s a lot of bad news, but here’s some good news. The Natural Resources Conservation Service has now developed a program in which they’re using various mixtures of cover crops to put into a typical corn-soybean rotation. What they’re finding now is that those cover crops restore the biological health of soil in a way that makes a major difference. Farmers who have been doing this for seven or eight years have reduced their fertilizer and pesticide inputs by 70 percent and still maintained the same yields, and their soil absorbs so much rainwater now, and this helps reduce [runoff] pollution in the Gulf of Mexico because the water stays in the soil and to some extent it helps to recharge the aquifers… Even John Deere’s Furrow magazine has picked up on this and their February issue this year was all about soil health, full of stories about farmers who were using this cover crop arrangement.

Q: All of these developments we know as conventional agriculture were kind of happening under our noses, but for most people, there was just no awareness of it. It strikes me there’s still a really major educational project ahead of us.

Kirschenmann: That’s why, to me, a place like this is important. We’re not going to educate the whole world, obviously. And part of what we’re doing right now, we got a grant a couple of months ago and hired a young guy for us to reach out, what are some of the other institutions and activities going on in the larger Hudson Valley, so what we’re doing here can begin to be duplicated in other areas. A lot of this has to happen from the bottom up… The local food system now has started to transform that. And now people have become active food citizens, and food sovereignty has become very important. So I think at some point, and I see this already happening in New York, where people now, as they become food citizens, they want to have some say, and so their politicians are starting to respond… This isn’t just happening in New York, it’s happening in Los Angeles, San Francisco, Minneapolis, Chicago, you’re going to have these voting populations of people who want to see changes in the food system. They’re going to bring political pressure in Washington against the vested interests…

The other exciting thing that’s happening right now, some people refer to it as the “foodshed movement,” some as the “food hub” movement. There’s a group in California that I’ve served as an outside adviser with called the Food Commons. The city of Fresno now has made a commitment to be one of the first prototypes for putting this kind of system together, and they already have a fairly sizable organic farmer who wants to contribute, to reach a deal of making his farm available to the trust. The city of Atlanta has now agreed to become a second prototype. There’s an individual in New Zealand that wants to adopt the same kind of concept. Here in the Hudson Valley, the American Farmland Trust is involved in developing the food hub here. They see urban agriculture as the means to meet some of their goals for preserving farmland instead of having it all go into development.

There’s a lot of good things like that happening. Again, it’s probably going to take a little more crisis to get more motivation. But it’s not going to go away.

Q: With food hubs and other means of Good Food distribution networks starting, what are the biggest practical obstacles?

Kirschenmann: One of the first ones is going to be to create the new network of farmers who are going to supply. The other thing is going to be developing the relationships outside of the hub.

All food hubs are going to be limited by their own ecological location. Everybody is probably going to want to continue to drink coffee, and you can’t grow coffee beans in every ecology. So the larger vision which some of my colleagues and friends have is eventually, the homogenized global food system is going to disappear. In its place, you’re going to have these networks of food hubs all of the world. For instance, a food hub in North Dakota would certainly grow its own grains for its own bread, but they would probably have a relationship through Facebook and Twitter and all of these other social media arrangements with a food hub somewhere in the South to get their coffee beans and in turn exchange some grains, etc., with them. That kind of network food system would eventually emerge.

Q: So many of the problems we have in our culture stem from the fact that we’ve become predominantly a reactive society and don’t believe in prevention, even though prevention stops terrible things from happening that didn’t have to happen, and comes at a cost, even though it’s an upfront cost, that’s by many degrees less costly than fixing the problem after it breaks. How optimistic are you that we can get to this understanding and start really making the changes that need to be made before a crash?

Kirschenmann: First of all, I learned some really important things from Jared Diamond’s work. His intensive study of past civilizations led him to a single, simple conclusion. That is that those societies, those civilizations that anticipated the changes coming at them, approached that from an ecological perspective, and got a head start on the changes, were the ones that tended to survive. The ones that failed on that exercise were the ones that tended to collapse.

In my own work, for a long time I thought my mission was to change people. When I really started thinking about Jared Diamond’s analysis, my mission isn’t about changing people. It’s preparing for the changes that are coming.

When I talk to farmers now, for example, who are locked into the conventional system, I don’t try to change them. What I try to say them is, we should both think about the challenges coming at us. So let’s assume 10 years from now that crude oil will be $300 a barrel and that we only have half the amount of fresh water, twice the number of severe weather events. Can you still do what you’re doing? Can I still do what I’m doing? My answer is, no, I can’t, I’ve got to make some changes. Can we talk about this together? We start to have a conversation.

The other thing, and I learned this from Vaclav Havel, when he became president of Czechoslovakia and it was in a mess, and somebody came up to him and said, ‘Are you optimistic that you can change things?’ His response was, ‘No, I’m not optimistic. In fact, optimism doesn’t help you. If you’re an optimist, you think things are going to turn out okay and maybe you don’t do anything, and it’s a problem. It’s also a problem if you’re a pessimist, because you think everything’s going to hell anyway, there’s nothing I can do about it, and you don’t do anything.’ He said, ‘What I am is hopeful. When you’re hopeful, you’re going to do the right thing even though you don’t know if it’s going to turn out well. If you’re hopeful and you’re doing the right thing and you have the right convergence of events, then things can work out well.’ And that’s exactly what happened in Czechoslovakia.

If you’re not hopeful, then what are you going to do? You don’t do anything. So even if you can’t look out there and say, ‘There’s a lot of reasons to be hopeful,’ I have to be hopeful, because then I’ve gotta do what I’ve gotta do. And again, if there’s the right convergence of events, then it’s anticipating the changes that are coming at us, and getting a head start.