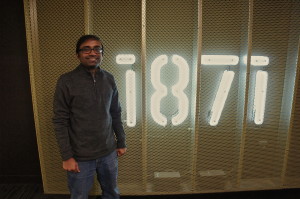 That is where it happened for Raj Karmani. And what he learned about food waste and hunger after a conversation with the owner of an Einstein Bros. Bagels store in Champaign, Illinois, just three years ago led to the creation of Zero Percent — his increasingly impactful Chicago-based startup that uses technology to facilitate donations from foodservice businesses to nonprofit organizations that provide food assistance to the needy.

Karmani and his Zero Percent team provide food business clients (such as restaurants, small neighborhood grocery stores, cafeterias, bakeries, catering companies, vending companies, and farmers markets) with a computer platform. This enables them to post surplus items that they have available for donation to food banks and other such groups, which can place requests for those items.

Participating businesses pay a monthly fee to Zero Percent, which is based at the 1871 technology-based business incubator in Chicago’s Merchandise Mart. The benefits they accrue in return include data reports from Zero Percent, reduced fees for carting food waste to landfills, charitable tax deductions (in many cases) — but perhaps most importantly, an image boost among the rapidly growing constituency of consumers to whom a dedication to sustainability matters when they choose where to eat or purchase food.

The nonprofit recipient groups pay a fee only if the food they have requested is delivered to them by Zero Percent. If the groups pick up the donations themselves, there is no charge.

Zero Percent has gotten some help along the way. In 2013, it was among eight businesses chosen by the accelerator program Impact Engine to participate in its second cohort of startups. The following March, Zero Percent was a finalist at the Financing Fair staged by FamilyFarmed (the publisher of this website) as part of its annual Good Food Festival & Conference in Chicago.

As a result, Zero Percent has gone from zero donations to about a ton of food a day, according to Karmani, in a little more than one year. And it is less than three years since the whole idea was sparked by that visit to the bagel shop.

Karmani said he was a regular at the Einstein Bros. in Champaign when he was a graduate student in computer science at University of Illinois’ flagship campus. During a chat with the owner, he learned that the shop had attempted to donate leftover food to local nonprofits that provided assistance but had run into frustrating logistical obstacles, mostly involving a lack of reliable systems for the groups to do pickups at the bagel shop.

Although Karmani was quite familiar with the problems of poverty and hunger from his native Pakistan, he said he was not then aware of the dimensions of the twin problems of food waste and food want in the United States. But he did know technology: He and fellow students quickly developed an app that enabled the Einstein Bros. store to post its available donations and for nonprofits to arrange to receive them.

Word spread and some other businesses asked for the technology. A series of steps up came quickly. The University of Illinois, which runs a huge campus foodservice operation, became a donor. Zero Percent received positive attention in an article published by the Washington Post. And just as Karmani was about to receive his graduate degree, Zero Percent was accepted into the Impact Engine program.

Chicago is a city with a restaurant and foodservice community that is well-attuned to the Good Food movement principles of sustainability, and Zero Percent quickly gained some high-profile clients, including the Sopraffina fast/casual Italian food chain (owned by Dan Rosenthal, a co-founder of the Green Chicago Restaurant Coalition), Goddess and Grocer (a gourmet deli and catering company), and Hannah’s Bretzel.

As the concept grows, so does the learning curve, according to Karmani. “It’s just that first step that requires a little bit of adjustment,” he said “If you see a dumpster, you see a trash can, you’re just going to throw it away. Now the boss is saying, ‘We’re going to set it aside so we can donate it.’ With the right heart and the right time, you can be part of that change.”

Zero Percent also is responding to a recognition that one of the causes of hunger in America is the lack of access many people, especially those with low incomes, have to healthful and affordable food options. He said he is working with nonprofits and other partners to develop an adjunct program called Access Through Excess.

Karmani sees opportunities for Zero Percent to grow beyond its current focus on Chicago, but he also wants it to stand as a replicable model that communities all over can use to both reduce food waste and feed more hungry people.

“There are many communities where there already is a nonprofit or some organization trying to do the same. How about we give them all the tools that we have, all the learning, so they can take advantage?” Karmani said. “We want to be elsewhere with the technology, but we don’t want to be re-inventing the wheel in that community… We want to be partners with them in new cities.”