Americans are increasingly health-conscious and concerned about what foods they are putting into their bodies. But many of us are also time-challenged and find ourselves in situations — whether it is getting up and out of the house in the morning, squeezing in a workout, or quashing that between-meals hunger — when we feel the need to grab and go. While there are plenty of nutritious and tasty whole foods out there, it is easy to fall back on the old, less healthy habits of doughnuts or candy bars or chips.

This is an issue that dailyServing, a Chicago-based food startup, aims to address. Currently available on a limited basis in metro Chicago, and likely soon around the Midwest region, dailyServing aims to fill that gap for people who want a quick and tasty hit of food that also provides a healthy boost.

dailyServing launched in mid-2014 with a line of 12 products, each of which combined a cold-pressed juice with two containers of dry foods that, together, aimed to address a specific activity. The company, according to co-f0under Shane Christensen, is tweaking the product line, reducing the number of individual products to nine and changing the packaging so there is one larger container of a blend of dry goods along with the juice, instead of the original two.

The nine products with which dailyServing is moving forward are Boost (for a metabolism boost), Wake (morning energy), Fuel (pre-workout), Recover (post-workout), Ignite (energy pick-me-up), Calm (relaxation), Focus (mental focus), Satisfy (feel full), and Defend (immunity boost). There is an umbrella term for this concept: “functional foods,” defined by the Mayo Clinic as “foods that have a potentially positive effect on health beyond basic nutrition.” 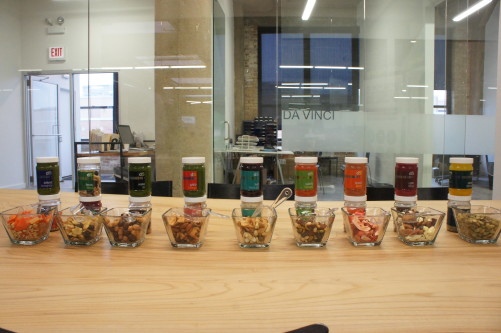 Christensen — a Fellow in the Good Food Business Accelerator program run by FamilyFarmed (the publisher of this website) — said he and his two founding partners at dailyServing all had entrepreneurial backgrounds, but none had previous experience in food. So the first people they hired were two highly regarded dietitians to craft the synergistic food combinations that became dailyServing’s product line.

“There are more than 90 research reports that we used to come up with the recipes for these products,” Christensen said, adding, “Every single element on every one of these is going to a specific health and wellness goal.”

Christensen noted that while there is a huge volume of information available to consumers about the nutritional and other health benefits of different kinds of food, it is hard for many to process and convert that information to use in their busy daily lives: “If you Google ‘What to eat for…,’ you’ll see all of our concepts come up, and every day, on CNN or CNBC or some other website, you’ll see an article. What to eat for better immunity, what to eat post-workout, what to eat pre-workout, what to eat to boost metabolism. Every day!” 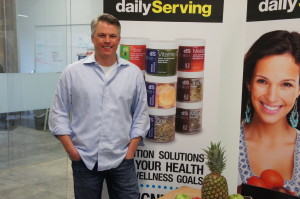 Christensen continued, “We’re taking all that research and knowledge that’s gone into that and putting it into a product form that’s convenient and easy. We’ve done all the legwork and understanding of here’s what to eat, and more important, here’s why to eat it. So we’ve done that for you and made it as convenient as we possibly can.” He described dailyServing as “your registered dietitian in a bottle.”

One challenge that dailyServing finds itself addressing is that its portion sizes, very purposefully, are modest, meaning the company has to overcome the mentality that long ago took hold in the nation’s food culture that bigger is better and nothing succeeds like excess.

“We have heard, ‘I want more of this, it’s really good,'” Christensen said. “But what we’ve heard 10x over those comments are, ‘We love the portion control. We love knowing what the functional aspect of the food that we’re eating is.’ That has far outweighed the ‘I want more.’”

He added that while dailyServing’s products can take the place of a meal in a pinch, that is not their main intent. “This isn’t a meal. It’s designed for a specific purpose. It’s under 300 calories, and this is how much you’re supposed to eat to receive the most effect for the purpose.”

Christensen also said that dailyServing’s products are designed to provide for adaptations as consumer tastes and demands change. Citing a couple of ingredients that dailyServing uses in some products, he said, “We really didn’t know what chia seeds, kale, a lot of these things were a few years ago. So we don’t know what’s going to be there a few years from now. So we want to develop a system where change wouldn’t be disruptive, it would be part of what we do.”

At the moment, dailyServing products are being sold at a small number of retail outlets and health clubs, but Christensen hopes for a big expansion after the redesigned and repackaged “dailyServing 2.0” product line is released early this year. “The challenge was taking somewhat of a limited amount of foods that provide attributes that we need for our functions and make them taste great. That’s kind of the secret that we’re excited about. You can eat really well at a price point that’s really affordable, and it tastes great,” he said.