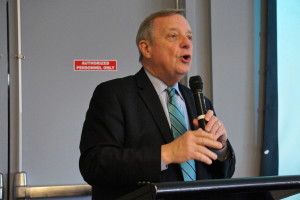 Durbin, a Democrat who is Illinois’ senior senator, attended the second day of the three-day event at the UIC Forum on the campus of the University of Illinois at Chicago. His visit came just hours after an appearance by Republican Gov. Bruce Rauner, who took office in January and is the first governor to attend the Good Food Festival & Conference in its 11-year history.

Rauner pronounced his support for the goals of the Good Food movement — saying “locally grown, sustainable, responsible, healthy, that’s what food should be all about” — and promised to help as much as he can to achieve them. (To read more about Rauner’s visit, click here.)

In his fourth term and the second-ranking Senate Democrat with the position of minority whip, Durbin said there are challenges ahead. “We know that local and natural food is healthier, and we’ve got to encourage it. We are dealing with medical trends in America that are troubling. Diabetes is the Hurricane Katrina of American health care. The cost of treating diabetes in America are $245 billion a year… I think there’s a connection,” Durbin said.

Noting the efforts of FamilyFarmed and other Good Food advocates to increase the amount of local and sustainably produced food served to children in schools, Durbin recalled a visit to a Chicago high school where the principal told him most students consumed Flaming Hot Cheetos and orange pop daily for breakfast.

But, Durbin added, he met with parents and teachers who said that when they begin to teach about better and healthier eating, children want to learn. “So there’s an opportunity to put Good Food for them to choose, but also to teach them what Good Food is all about,” Durbin said. 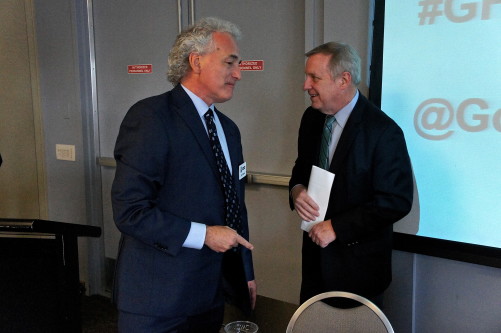 “The lesson here is when you have a leader or leaders who can identify a purpose that people will engage and do it for their own benefit and for a greater social benefit,” Durbin said. Referring to the Good Food movement, he added, “There’s no reason why it can’t happen again.”

Durbin concluded his visit with a meet-and-greet walk through the Exhibit Hall, where he met with and enjoyed food samples from some of the nearly 100 food and farm vendors displaying there. 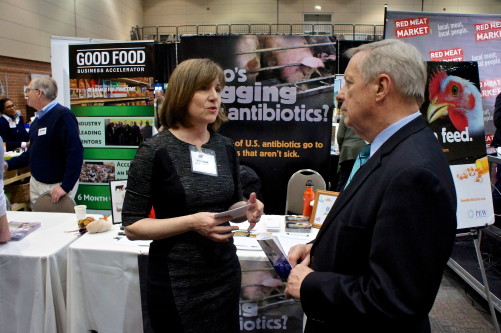 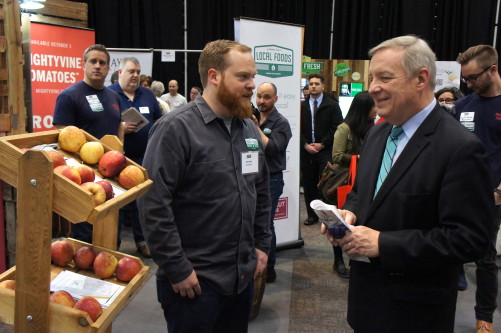 Illinois Sen. Richard J. Durbin visits with Dave Rand, chief operating officer of Local Foods Chicago, during the senator’s visit to FamilyFarmed’s Good Food Festival & Conference. Local Foods is a distributor that is opening an innovative retail market in Chicago this spring, the subject of a recent article on Good Food on Every Table. 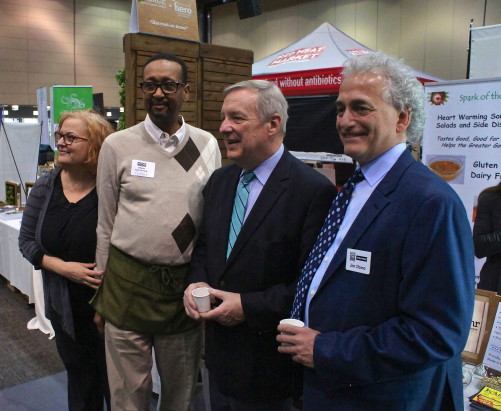 Illinois Sen. Richard J. Durbin (second right) poses for a photo at the Good Food Festival & Conference with FamilyFarmed President Jim Slama (right), and Cynthia Zeki and Thomas Frierson, the owners of Chicago’s Spark of the Heart. A producer of dried soup and salad mixes, Spark of the Heart is a Fellow participant in FamilyFarmed’s Good Food Business Accelerator program. 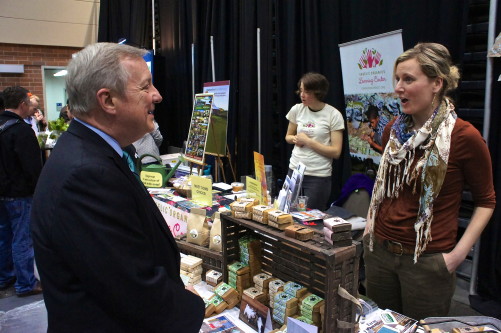