The damaging impact of “chemical drift” is one of the most critical issues for farmers who practice organic or other sustainable growing methods.

Since most farms still use “conventional” practices — meaning they use chemical pesticides and/or herbicides — it is hard for sustainable growers in rural areas to distance themselves off from these operations.

And sustainable farmers face catastrophic risks if chemicals drift from their conventional farming neighbors onto their lands. This can cause crop damage and even loss of organic certification because their plants — through no fault of their own — are tainted with chemicals that they are banned from using.

So the sessions tends to be both lively and impassioned whenever farmers and their advocates get together to discuss the issue, as occurred on March 20 at Family Farmed’s Good Food Festival & Conference in Chicago. 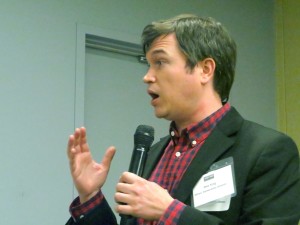 Wes King of the Illinois Stewardship Alliance started off the panel titled “Chemical Trespass: A New Generation of Genetically Engineered Seeds and Local Food Systems,” describing the gravity of the problem in no uncertain terms. He stated, “It has indelible impact on the whole food system,” adding, “It is a sense of trespass on that farmer’s property.”

Drift is the movement of a pesticide or other chemical through the air, away from its intended target. This can happen when sprays or particles are carried astray by the wind, or by inadvertent spraying in the wrong area. It also can happen through vapor drift, when pesticides in an already-sprayed area re-emerge through the ground as vapor and, again, drift to land that was not intended to be sprayed.

King asked the panelists for personal stories of the impact chemical drift has had on their farms. 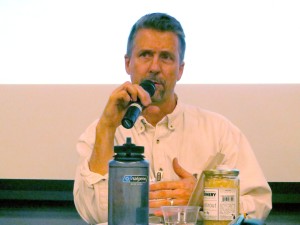 Tom Spaulding of Angelic Organics Learning Center in Caledonia, Illinois, told his tale of leasing 35 acres of land from a neighbor, only to find out that it had been sprayed. Luckily, she was a good neighbor and refunded his money. But the inability to lease the land put a serious kink in his plans.

Growing Home — a Chicago-based nonprofit that grew organic produce in downstate Marseilles as well as on urban farms in the city — faced similar problems. Stephanie Douglass, Farm Director of Growing Home, began by saying, “At the end of May last year, everything was going perfectly…” 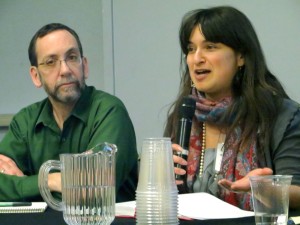 But soon her crop of organic greens was covered with little tan spots. It soon turned into what she described as a “zombie apocalypse.” The people who sprayed on the farm next to hers were clearly in violation. She had to let the land lie fallow for three years to cleanse it of the chemical intrusion. (This situation was documented in an article in the Chicago Reader published in September 2014.)

Harry Rhodes, executive director of Growing Home, brought up some of the problems in addressing the issue of chemical drift. One is that the burden of proof is on the small farmer. Another, he said, is that it took the state Department of Agriculture six weeks to send out only a warning letter to the offending party.

He suggested that farmers work together, saying, “We need to find out how to work on a statement policy.” 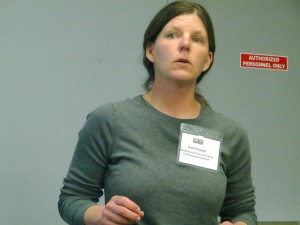 Anita Poeppel of Broad Branch Farm and Spray Drift Education Network brought in her perspective. “We’ve been dealing with drift for 10 years,” she explained, continuing, “This is the biggest problem that we have. We’ve had drift in 5 miles per hour [winds], in 10 miles per hour.”

“There are no drift police,” Poeppel said. “And the victims are being blamed.”

Dave Bishop of PrairiErth Farm in Atlanta, Illinois, brought it all home, describing the well-known problems of glyphosate — a chemical found in Monsanto’s widely used Roundup and other pesticides — and a new product, Enlist Duo, that combines glyphosate with 2,4-D, another controversial chemical. Bishop made a point that liability laws must be changed so organic farmers can go up the industrial food chain and go straight to the manufacturers of pesticides.

“The only way to slay the dragon is to stop feeding the dragon,” he said.

Informative sessions such as this one at the Good Food Festival & Conference help make consumers more aware and more likely to seek healthier and more sustainable food options. This, in turn, will help small farmers supply more good, healthy, pesticide-free food to the market. 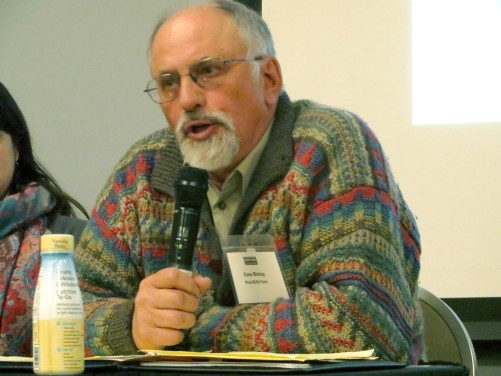