Debbie Wood is the founder and owner of No Denial Foods, which produces sumptuous snack mixes and baked goods from grain-free, low-sugar recipes she created to address her own health issues. Debbie exhibited at FamilyFarmed’s Good Food EXPO in March 2017 and enjoyed record on-site sales. The experience prompted her to join the current fourth cohort of FamilyFarmed’s Good Food Accelerator.

Debbie Wood’s diet has been complicated since she was 9 by Type I diabetes and a more recent diagnosis of celiac disease. Rather than resign herself to a life without sweet treats, she made her own, got lots of positive feedback — from people who had similar health issues and those who did not — and decided to make a business out of it.

The connection between food and health, represented by producers such as No Denial, is something that FamilyFarmed will emphasize with Good Food Is Good Medicine programming at the Good Food Festival on Saturday, March 24, the second day of the Good Food EXPO. 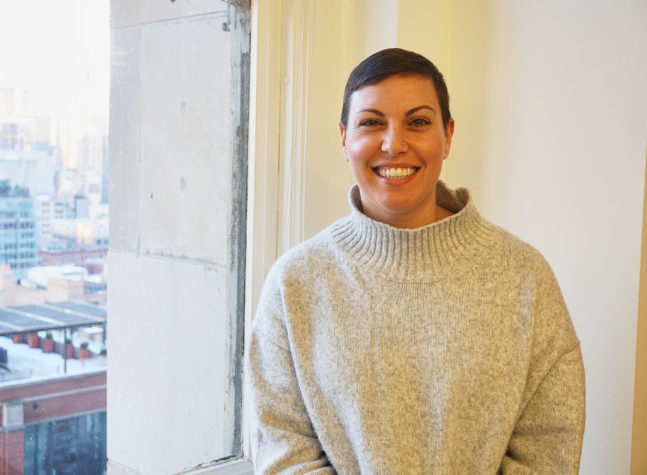 Debbie Wood’s efforts to make delicious treats that did not aggravate her diabetes and celiac disease led her to create No Denial Foods, which sells indulgent nut-based mixes and baked goods. Debbie was an exhibitor at the 2017 Good Food EXPO and is now a Fellow in the current cohort of FamilyFarmed’s Good Food Accelerator program. Photo: Bob Benenson/FamilyFarmed

Q: Everyone is interested in entrepreneurial journeys. In your case, your interest that evolved into your product was something that began in your youth.

Debbie: I was diagnosed with Type I diabetes when I was 9 years old and celiac disease when I was 32. I struggled to find foods that brought joy to me, that didn’t hurt my body. I thought about food 24/7. It caused me a lot of anxiety… What seems so basic to so many people was so complicated to me… I had to think about what I ate every second of the day and how it affected my blood sugars, and also, when you brought the celiac aspect into it, avoiding many different kinds of foods that I used to indulge in, and also how they were prepared, what was safe for me, what was harmful.

Q: It wasn’t your first career of choice.

Debbie: No, I had a successful real estate career for over 15 years… For personal, health, selfish reasons, I started playing around in the kitchen and trying to solve my own problems. And the light bulb went off when I finally figured out ways to bring the enjoyment of food back to my life, and I said, “Wow, this is really a big problem for many people just like me,” whether they’re diabetic or have celiac disease, they really struggle with their food choices, and there’s a feeling of isolation when you’re restricted in so many ways… Food is something everybody should be able to enjoy and everybody should be able to partake in a fun way…

Q: Did people eat what you made and say, “You should sell these?”

Debbie: Yes, years of that… I got asked almost every day, could you make me this or can you bring more of that in to try or have you made any more of this and it became a constant. I saw a definite need that went beyond myself… I came out with the snack mix because I had a love for granola, and I could not eat regular granola because I also am intolerant to oats… What evolved was not paleo granola, it was a salty, sweet, decadent snack mix that you can munch on during the day, you can top on yogurt, you can top on fruit, eat it with your coffee. It’s just a kind of versatile, treat-like snack that makes you feel really good about eating it, and for me it doesn’t hurt my body. It’s clean, simple ingredients mixed with a light coating of coconut oil, honey, sea salt and vanilla, and it’s just beautiful. It’s addicting. 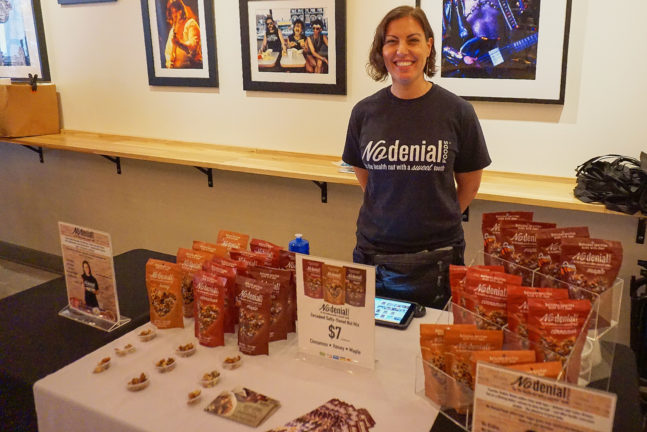 Product sampling has been a big part of Debbie Wood’s efforts to introduce her No Denial products. Here Debbie provided samples of her No Denial mixes at a pop-up market at Chicago’s Revival Food Hall on June 17, 2017. Photo: Bob Benenson/FamilyFarmed

Q: Do you find your target market are people with health issues, or people who just want to eat healthy, delicious snacks?

Debbie: When I first started I thought that my customers were going to be just like me, and they’re not. They are health-conscious consumers, most of them don’t have any diagnosed autoimmune diseases, but they know what food does to their body and how food makes them feel…

Q: Let’s talk about the R&D involved, because everyone is just crazy about your cake pops.

Debbie: In addition to the nut mixes, I have a bakery line. The nut mixes are what I’m trying to get into more stores out there so more people will be able to buy as a grab and go… The bakery goods is another part of the business that’s received really well, there are no paleo bakeries in the city. They are very labor-intense, very expensive ingredients, but there’s a market for them. I do it for myself and I test it with a group of friends and people who eat the same way I eat, and when something sticks, alright, that’s a good one. That’s what happened with the cake pops. I do it per order now. I’d like to get those products into the CPG [consumer packaged goods] world at some point, but I know in order to do something well it takes time…

Q: So you’ve got all this great feedback, what were your first steps into entrepreneurship?

Debbie: I did a lot of R&D with my local health community, my local gym, my community, my friends, friends of friends. I originally started selling cone-shaped bags of honey nut mix. I would put 10 bags on the counter of my gym, I put an envelope next to the cones, $5 a bag and it was the honor system, you put your cash in there and grabbed a bag. I was refilling the amount of cone-shaped bags of nut mixes almost twice a week. When the gym would run out people would text me and say, “Can you meet me around the corner with a bag of nut mix. So I became kind of the nut mix dealer of my area…”

Q: So you were pretty early-stage when you connected with FamilyFarmed.

Debbie: The Good Food Festival was my first food festival. I had kind of officially launched in July 2016. I knew my packaging needed to change and my verbiage, and that was finished in January, so the Good Food Festival in March was the first time that people really saw my new packaging… I had a few people say to me, “Your booth won the show.” We were packed, there was so much energy there and people loved it. It was the first time we were in front of thousands of people. They didn’t have to like it, they didn’t have to buy it. But they loved it… The reception and even the feedback afterward from people who I had met there, it was clear to us that we’d hit the right group and we got our message out to a really broad group of people, which is exactly what needed to happen.

Q: What were the after-impacts?

Debbie: Afterwards was just validation. This company started because there is a need in my own life and I saw a need in the lives of others around me. This exposed me to a larger group of people, many of whom have the same needs. It showed me how well received and how necessary new products like ours are. People got so excited, they wanted to tell me their story, even if it was so different from mine, everybody has a story. So many people have a story that connects to food that makes them feel restricted and isolated… What we’re doing with our company is really tapping into the emotional needs of consumers who have struggled.

Q: What then prompted you to get involved with the Accelerator?

Debbie: I learned about the Accelerator through the Good Food Festival. I started to ask a lot of questions from people who participated in the past… I realized it was the right time for my business to benefit from learning so much more. Again, you don’t know what you don’t know until you learn something or ask the right questions or meet someone who tells you you should know this….

Q: All of our Felllows come with a particular issue or issues that they are looking to address.

Debbie: Mine is really bringing the nut mix to the masses. It’s easy to sell a product to someone when you’re the one with the message and the story selling it. But you can’t grow to a bigger level with just you. How to communicate your story and your brand in a way that people who don’t know you absorb it in the right way and can resonate with it and look at your brand and say, “I can relate, I need it.”…

Q: You mentioned Good Food Is Good Medicine. These were issues you confronted before the medical community started to change.

Debbie: When I got diagnosed with celiac disease, there were tons of gluten-free options out there already, this was eight-plus years, but they were full of sugar and high-starch flours. As someone watching their sugar intake, I couldn’t partake in any of them. There’s no one solution for anybody, you need options, you need to understand what all types of foods do to your body. We’re examples put out there to be platforms for these really important subjects, and voices for people that don’t know how to voice their struggles or figure out a solution to what they’ve been struggling with…