Cultured Love, based in Holland, Michigan, produces healthy, probiotic sauerkrauts in a variety of traditional and innovative flavors. Jodie and Paul Krumpe, who founded the company in 2014, exhibited at FamilyFarmed’s Good Food EXPO in March 2017 and enjoyed record on-site sales. The experience prompted them to apply and get accepted for the current fourth cohort of FamilyFarmed’s Good Food Accelerator.

The Krumpes established Cultured Love after family illnesses spurred them to deeply research the connections between food and health. This is something that FamilyFarmed will emphasize with Good Food Is Good Medicine programming at the Good Food Festival on Saturday, March 24, the second day of the Good Food EXPO.

Please read below about the important message behind Cultured Love’s products. 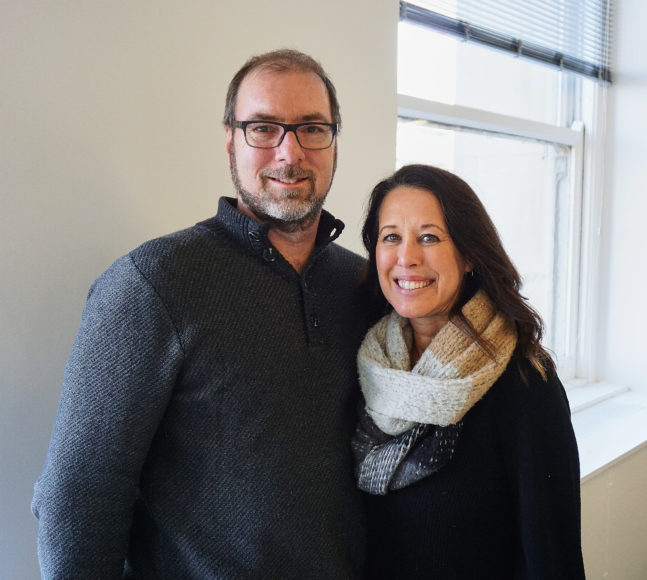 An attack of Lyme disease that temporarily debilitated their daughter and also affected them prompted Paul and Jodie Krumpe to explore the healing powers of food, especially fermented foods with probiotic qualities. The positive impacts of their dietary changes led to their creation of Cultured Love, based in their hometown of Holland, Michigan, which produces delicious sauerkraut in a variety of flavors. They are Fellows in the current cohort of FamilyFarmed’s Good Food Accelerator. Photo: Bob Benenson/FamilyFarmed

Food entrepreneurship was far from the minds of Jodie and Paul Krumpe a decade ago. Paul was a technology consultant, Jodie a stay at home mom whose cooking was, in her words, “more processed, easy foods.” But their lives were disrupted by Lyme disease, which most seriously affected their daughter Molly — then in middle school — but also burdened Jodie and Paul.

An arduous recovery, which medical professionals treated with heavy doses of antibiotics, spurred Jodie to undertake what Paul calls “a ton of research” that revealed the positive health impacts of a diet change featuring healthy foods in general, and fermented, probiotic foods fostering gut health in particular. This led the couple in 2014 to start Cultured Love, their line of raw, naturally fermented sauerkrauts in flavors traditional — Dillyicious, flavored like a dill pickle, and Carry Me Away, with caraway seeds — to adventurous, such as curry-flavored Curryosity, kimchi-style Root for Ginger, and Purple Hot & Spicy with red cabbage and cayenne.

You can purchase Cultured Love products at their online store, farmers markets and select retail outlets in their home state of Michigan… or at FamilyFarmed’s Good Food EXPO, March 23-24 at Chicago’s UIC Forum, where they will again be exhibiting. Paul and Jodie also are Fellows in the current cohort of entrepreneurs participating in our Good Food Accelerator.

Q: Let’s start at the beginning of your entrepreneurial journey.

Jodie: I raised two kids, I homeschooled for about five years. Then my daughter got sick [in 2007] and I got sick too. All three of us were diagnosed with Lyme Disease. It was many years of recovery and trying to figure out how to get healthy… Researching healthy foods, realizing that diet change was huge. It turned my whole cooking paradigm upside down. Cooking was more processed easy foods for me. I found I had to start cooking things from scratch, making lots of broth and things I’d never made before.

Paul: You had this very capable, vibrant young woman in middle school just taken down. She couldn’t play sports, she was depressed… When Jodie was sick, she would wake up in the morning, come downstairs and just lay on the couch, because she was so fatigued, just miserable. But while she was resting, she spent a lot of time watching Food Network. That was one of the things that introduced us to the value of food and the whole mechanics, the whole process, the whole romance of making your own food… At the same time, she was building a community with other people in our area who were dealing with the same problems. Many were dealing with just antibiotics… We found other people in that community who were looking for other alternatives. We were referred to a grass-fed beef purveyor with organic chickens. We talked about making sauerkraut, we talked about making broths, we talked about herbal treatments. All of those influences started to come in over those five or six years before we made the real jump and a diet change.

Q: Were there a range of ideas you were experimenting with or did the logic of fermented foods and sauerkraut just jump out at you?

Jodie: It jumped out at me because I didn’t grow up eating sauerkraut… When I saw the benefits of fermented foods, it just blew me away. Why are we not eating this? This is a food that’s been around for a long, long, long, long time. It needs to be revitalized and revisited and consumed because of the probiotic benefits and all of the benefits of the nutrients are increased during the fermentation process. It’s highly nutritional and very tasty and it’s really easy to incorporate into a lot of different meals.

Paul: It had an immediate impact on Molly’s health and her well-being, it changed the light in her eyes… She eventually graduated with a nursing degree… For a lot of people the only choice is to go to a doctor and get antibiotics and do whatever they tell you to do. You’re so sick you don’t do what you really need to do. One of Jodie’s first inclinations was, let’s help people…

Q: You started in an incubator kitchen. Take us through the process of how you knew you had something bigger.

Jodie: I just had a gut feeling, pun intended there, that it was something that we needed. I know that people need this food. They might not know it now, there’s a small percentage that know it now, but it’s going to grow… The medical field is starting to get it, there is a connection between good food and good health, and bad food, processed food, food that is really poisoning your bodies, and the disease that we’re seeing. So I just knew I needed to create it…

Paul: The recipes that she developed for the sauerkrauts were important and they were intentionally colorful, flavorful, distinct. As soon as we started selling at our first farmers markets, people were responding to those very things very immediately.

Q: How did you first connect with FamilyFarmed at the Good Food EXPO?

Paul: [In March 2017] I think I was reading something randomly that mentioned the Good Food EXPO, and I thought that sounded interesting, I wonder if that’s anything we’d like to be involved with… We started reading it line by line, it was right in line with our target. It was two or three weeks before. We started corresponding, and we said, “We’ve got to do this, let’s go to Chicago, who know what will happen.”… We’re coming out this thing with no entrepreneurial experience, no food experience… It was crazy, we sold more than we ever had at that point at one place… It really opened our eyes to all this. It was really great exposure. 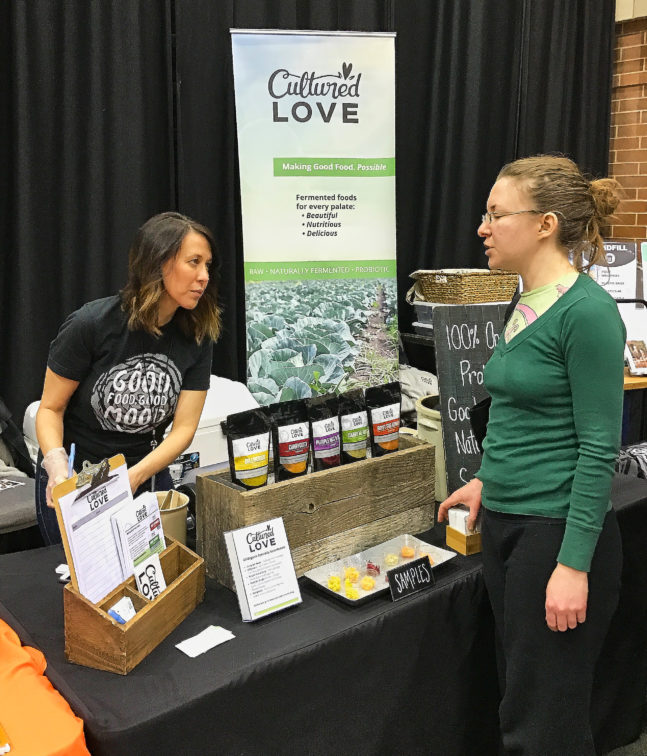 Cultured Love, founded and run by Jodie and Paul Krumpe, makes probiotic-loaded sauerkraut in a variety of flavors. In the photo, Jodie (left) provided samples of the company’s products last March at FamilyFarmed’s Good Food EXPO, an event that Paul and Jodie say give a boost to their business. Photo: Bob Benenson/FamilyFarmed

Q: How did that lead you to decide to apply for and participate in the Accelerator?

Jodie: We know we need connections, people that understand marketing. Everything we’re learning is amazing. This is so great… It was all passion and I just wanted to get good food into the standard American diet, good food on people’s plates… I just knew we needed the information. We need the support and the infrastructure and also to be with other food entrepreneurs.

Paul: And the sharing of skills and experience. We’re not trained, we’re not MBAs, we’re not food scientists, and some of the people in our cohort are MBAs and have been through huge large-scale food companies. Those are views that we couldn’t have. On the other hand, we’ve gone through a lot of things that other people haven’t, doing e-commerce on Shopify or things we’ve figured out in our own way that can contribute to what other people are trying to figure out.

Q: You think of sauerkraut, you think of hot dogs, heavy German and Polish food. You’re reaching an audience that is much more receptive to different flavors, different ethnic kind of foods.

Jodie: We found that people who are on a plant-based diet really love that we have a variety of flavors. They’re less interested in traditional sauerkraut as much, because they eat so many plant-based foods, they want more flavor. The people who are coming from a standard American diet of maybe meat and potatoes, we pull them in more with the Dilly-licious kraut, the one that tastes like a dill pickle, because it’s more familiar.

Jodie: It would be great just to grow into other states and regions.

Paul: We still have a lot of opportunity in the state of Michigan… We also feel, especially with the involvement of the [Accelerator], there are some really great opportunities through the network that we have here that could open up… In a year from now, I’d like to see our growth coming largely from those two places, increase in Michigan and finding our way through to Chicago.