Would you like to hang out with and learn from some of Chicago’s best-known chefs? And have you ever wanted to be a kid again? You might, then, be a little jealous of the Chicago schoolchildren who get to participate in the chef-driven Pilot Light educational program.

Founded five years ago and headed by a core group of culinary all-stars that includes Paul Kahan, Matthew Merges, Jason Hammel, Justin Large, and Ryan Poli, the nonprofit Pilot Light project is currently working in six Chicago Public Schools to improve food literacy and help children make healthier choices. They do so by working with educators to integrate lessons about food and its role in society into the overall curriculum.

On a regularly scheduled basis, participating chefs team up to visit these schools and teach age-appropriate lessons to kids at the different grade levels. And — now here’s the part that may really make you jealous — they cook and serve what may well be the best school lunches ever for the students and their teachers.

While grown-ups are likely to witness Pilot Light in the classroom only if they have a child in one of the partner schools, attendees at FamilyFarmed‘s Good Food Festival on Saturday, March 21 at Chicago’s UIC  Forum will be able to enjoy a rare outside glimpse of the program.

This session will kick off the chefs’ segment of the Good Food Festival, which also includes the presentation of FamilyFarmed’s Good Food Chef of the Year award to Paul Fehribach of Big Jones restaurant in the Andersonville neighborhood, and a chef demonstration by Nicole Pederson of Found Kitchen and Social House in suburban Evanston. 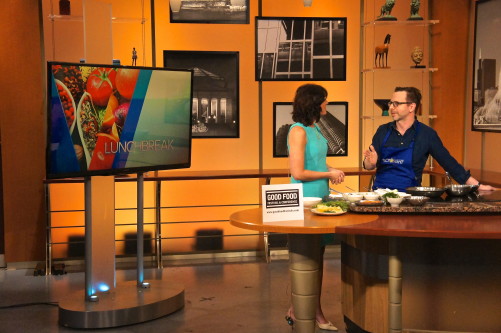 Merges explained the origins of the program during a February Pilot Light session, attended by Good Food on Every Table and other guests, at the Disney II Magnet elementary school in the Old Irving Park neighborhood on Chicago’s North Side. He said the chefs who started the Pilot Light program were inspired by the child nutrition and fitness programs championed by first lady Michelle Obama, but decided they wanted to pursue their own unique direction.

“One of our non-negotiables, whatever we do, every child in the school has to have access to this in some way,” Merges said. “A lot of programs do after-school or they’re for certain kids or you have to sign up for it. We said, it needs to be in the curriculum. So it was important for us to make sure that we had educators on board to make sure we could work with the curriculum.” 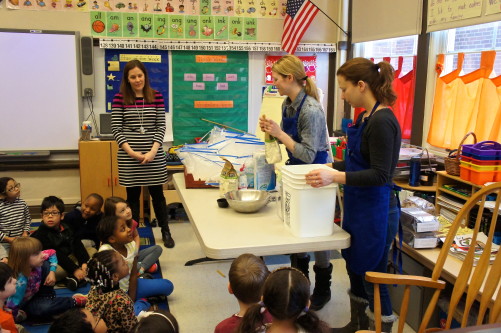 A look at the schedule for that day’s program illustrates how it is scaled to the different ages and learning capacities of the students. Chefs Sandra Holl (of Floriole Cafe and Bakery) and Rachel Post (of Our House, a new pizza restaurant she is opening, and formerly of Floriole) taught the kindergarteners about “Living and Non-Living Things: The Life Cycle of Yeast,” which ended with the tots giving bread dough a workout. 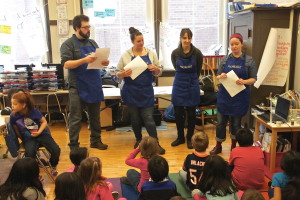 The lessons became more sophisticated as the grade levels progressed. For example, fourth graders received a lesson from Hammel in “Chemical Tests: Learning About Emulsification” that ended with the children attempting to make mayonnaise from raw ingredients.

Hammel, in a discussion that followed the lessons and preceded lunch, said the whole point is to help children think more deeply and critically about all the subjects they are being taught, not just food. “The more of these lessons we do, the more than becomes part of their thought process,” Hammel said. “The class where we were making mayonnaise? It had nothing to do with the mayonnaise. It had everything to do with how is this made, where did it come from, did it have a history, is there a story behind it, do I know the story, should I find out?… It’s so exciting to see this happen.”

Merges confirmed what the guest observers already discovered about the children who participate in the Pilot Light lessons: “They are totally engaged.”

He continued, “When you are teaching something that’s out of the norm, or you bring in a chef, you do something different, you really grab their attention. Every time we come in here, they ask you about the previous lesson.” 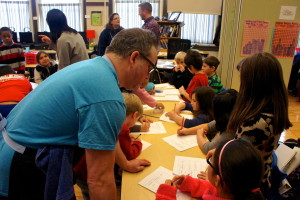 Chicago chef Paul Kahan, owner of the One Off Hospitality Group, works with third graders during a lesson on Chicago food cultures

And there is an extra benefit: The kids take their lessons home and influence their parents, according to Kahan, a program co-founder who is the chef-owner of the One Off Hospitality Group, which includes highly regarded Chicago restaurants as Nico Osteria, Blackbird, Avec, Big Star, The Violet Hour, Dove’s Luncheonette, and The Publican, as well as Publican Quality Meats and Publican Quality Bread.

“They do take it home. They do bug their parents. They do read labels,” Kahan said. “There are lessons we have done about reading labels. And they go home and they ask their parents. They want to cook the recipes that we’ve provided. It’s such a cool exciting thing. It’s so tactile. You don’t have to push kids to get excited about food.” 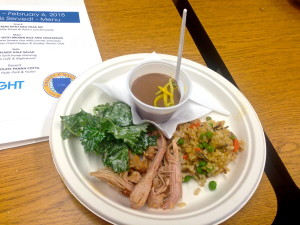 Smoked chicken with brown rice, vegetables and kale salad, with chocolate panna cotta for dessert — not your average school lunch

And about that lunch? It probably was better than what you ate that day. The kids were served crackers with a spicy Asian dip, smoked chicken with brown rice and vegetables, a creamy kale salad, and a chocolate panna cotta that appeared to be hugely popular.

Along with Disney II, the schools currently associated with Pilot Light are Mitchell Elementary in the West Town neighborhood, Anna R. Langford Community Academy in Englewood, Darwin Elementary in Logan Square, Ray Elementary in Hyde Park, and Smyth Elementary in Near West.

Along with the demonstration by chefs Merges and Hammel, Pilot Light will be represented at the Good Food Festival by executive director Alexandra DeSorbo-Quinn, who will participate on a panel on The Future of Food that will be moderated by Monica Eng of WBEZ and will begin at 11:30 a.m. on March 21.