The amount of edible food that goes to waste in United States and around the world — more than a third of all food by many estimates — is drawing increasing concern and attention from policymakers and producers alike. 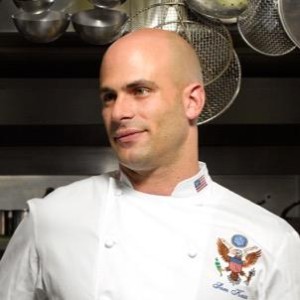 That was the inspiration behind a special “trash lunch” produced by famous chefs Sam Kass and Dan Barber for President Barack Obama, presidents Francois Hollande of France and Ollanta Humala of Peru, and other world dignitaries Sunday.

The meal was made with ingredients such as leftovers, scraps, bruised produce and other items that are perfectly edible and delicious, but too often end up being thrown out.

To read more about this important event, please click here for coverage by AFP (Agence France Presse) posted on the website of the Australian Broadcasting Company.

A photo of a menu posted on Twitter by a UN spokesperson showed it included a “Landfill Salad” composed of vegetable scraps, rejected apples and pears, and the reserved liquid from cans of chickpeas, and a burger and fries that included off-grade vegetables, bruised beet ketchup, a “repurposed bread” bun and “cow corn chips,” made with the kind of field corn that is mostly fed to livestock or used for fuel and makes up all but a tiny percentage of the crop grown in the United States.

It is no surprise that the luncheon was the brainchild of Kass and Barber, both of whom play leadership roles in the Good Food movement. 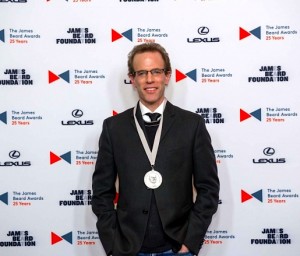 Chef Dan Barber is seen here with his 2015 James Beard Award for Writing and Literature that he earned for his book The Third Plate. He was also awarded with his team at New York’s Blue Hill at Stone Barns with the medallion for 2015 Restaurant of the Year. Photo: James Beard Foundation/Ken Goodman

Kass, a Chicago native, joined the Obama administration in 2009 as assistant chef, a role in which he helped first lady Michelle Obama develop a large vegetable garden on the White House grounds; moved up the next year to the position of Senior Policy Advisor for Healthy Food Initiatives; then became Senior Adviser on Nutrition and head of the first lady’s “Let’s Move” health and fitness program.

Barber is co-owner and executive chef of Blue Hill restaurant in New York City and Blue Hill at Stone Barns; the latter is located at Stone Barns Center for Food and Agriculture in suburban Pocantico Hills, New York, where he serves on the board of directors. Barber won two major awards this year from the James Beard Foundation: Outstanding Restaurant (for Blue Hill at Stone Barns) and Writing and Literature for The Third Plate: Field Notes on the Future of Food.