The National Young Farmers Coalition (NYFC) is a leader in efforts to persuade Congress to pass a bill (HR 2590, or the Young Farmers Success Act) that would bring farming under the definition of a public service and makes farmers eligible for student loan forgiveness. The Coalition is staging an advocacy campaign in Washington, D.C. Tuesday and Wednesday (Oct. 6-7), bringing farmers in from around the nation to make their case for this legislation.

We are re-publishing, with permission, a blog post NYFC published on its website about its report detailing why the loan forgiveness program is needed to get more young farmers on the land, in an era when the average age of farmers in America has risen to nearly 60.

A report by the National Young Farmers Coalition, titled Farming Is Public Service: A Case for Adding Farmers to the Public Service Loan Forgiveness Program, shows that student loan debt is one of the key barriers preventing more would-be farmers and ranchers from entering agriculture. The National Young Farmers Coalition issued a report, titled Farming is Public Service, in support of its campaign to get Congress to pass legislation providing young farmers with student loan forgiveness.

The report contains data from a new survey of more than 700 young farmers, as well as data compiled from the 2012 USDA Census of Agriculture. Highlights include:

• Survey respondents carried an average of $35,000 in student loans.

• 30 percent of survey respondents said their student loans are delaying or preventing them from farming.

“Farming is a capital-intensive career with slim margins,” said Lindsey Lusher Shute, NYFC executive director and co-founder. “Faced with student loan debt, many young people decide they can’t afford to farm. In other cases, the bank decides for them by denying them the credit they need for land, equipment and operations.”

With thousands of American farmers nearing retirement (the average age of farmers is now 58), the U.S. needs at least 100,000 new farmers over the next two decades. This issue reaches beyond the farm and impacts rural economies, because farmers are often the primary revenue generators and employers in rural areas. 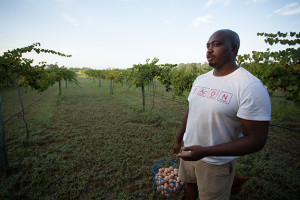 According to Davon Goodwin, a 25-year-old farmer and veteran from North Carolina, encouraging more young people to become career farmers is essential. “Farming is serving your community at the highest level,” said Goodwin. “Making sure families have access to healthy, local food is as important as being a police officer or a teacher.”

On June 1, legislation was introduced in Congress that would add farmers to the Public Service Loan Forgiveness Program (PSLF), placing the profession of farming alongside careers such as nursing, teaching and law enforcement that already qualify for the program. Through PSLF, professionals who make 10 years of income-driven student loan payments while serving in a qualifying public service career have the balance of their loans forgiven.

If you are interested in supporting the Young Farmer Success Act, please visit our Farming Is Public Service page to learn more and take action.