There was an air of promise that surrounded Wednesday morning’s grand opening of the Whole Foods Market store in the troubled Englewood neighborhood on Chicago’s South Side.

The shiny new location, for a natural foods chain that has a distinctly upscale image, is a promising development in Englewood. The positive media coverage of the opening event was refreshing for residents of a community — once a thriving commercial center — that over decades has suffered economic and population decline, and in recent years has most often made the news because of murders and other crimes.

“We have faith that this going to be a great development that creates a ripple effect,” said Leon Walker of DL3 Realty, which developed the Englewood Square shopping center at 63rd and Halsted that also includes a Starbucks that is now open, a Chipotle Mexican Grill that is still under construction, and other retail outlets.

He added, “When our shovels broke the hardscrabble of this land that once proudly hosted the nation’s busiest neighborhood shopping center, we broke a cycle of disinvestment and we planted a seed of hope.” 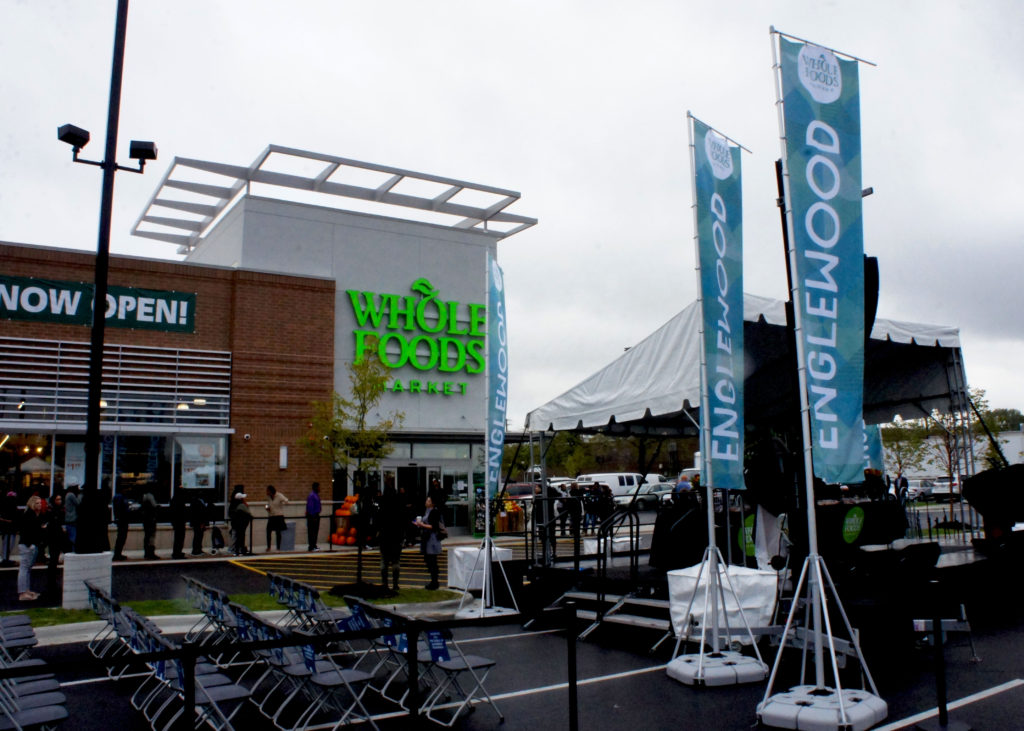 The new Whole Foods Market grocery store in Englewood is a major development in the neighborhood on Chicago’s South Side that has seen decades of economic and population decline.

There was also talk about promises kept. Bishop James Dukes praised Chicago Mayor Rahm Emanuel for keeping the vow he made six years ago, when he was first running for his office, “that he was going to bring quality food to our community.” Dukes continued, “Where there were food deserts, abandoned buildings, blood on the streets, closed schools and locked-up churches, we cut a ribbon today to symbolize a better tomorrow, the rising of a new day.” 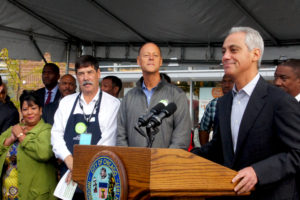 Emanuel in turn praised Whole Foods Market Co-CEO Walter Robb and Midwest Region President Michael Bashaw for responding to his outreach for the chain to extend beyond the city’s more affluent communities. “We as a city said, ‘If you’re going to call yourself a Chicagoland store, you had to be in all parts of Chicago,’ and Whole Foods answered that call,” Emanuel said.

The Englewood Whole Foods also presents some challenges as well.

On one hand, it challenges the notion held by some that communities that have suffered severe economic decline are beyond saving — a mindset used for many years to justify the disinvestment to which developer Walker referred.

On the other hand, it challenges Whole Foods to prove that it can succeed and spur economic development in a neighborhood that has lower incomes and bigger troubles that those in which the chain typically locates.

Bashaw, in an interview inside the store following the opening ceremony in its parking lot, said, “This is an act of love and faith on behalf of the company… I think, frankly, that this could be a very successful store.” When it was noted that Whole Foods has had a knack for opening stores in communities across the nation that were just on the cusp of economic revival and accelerating the process, Bashaw said, “I hope we got it right again.” 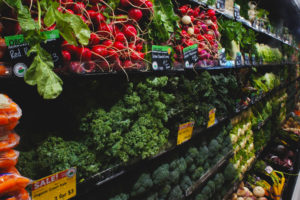 Like all other Whole Foods stores, the Englewood location features a wide range of fresh produce. A lack of easy access to fresh fruits and vegetables for residents of areas on Chicago’s South Side led to a rise of concerns about “food deserts.”

One frequently asked question about the Englewood store is whether Whole Foods Market would have to slash its regular prices in order to draw enough local shoppers. Bashaw noted that there are both sale items and everyday prices that the community would find very affordable. “Milk, apples, chicken, you will find values in every aisle in the store,” he said. “I think that people are going to be well satisfied.”

He also said that the store would not feature “365,” its competitively priced house brand, more than any of its other stores. “There will be great prices on our 365 products, but there will be other choices if you’d like to spend,” Bashaw said. “What we wanted was to give the community the same choices they would have in any other Whole Foods Market. That’s what the community told us they wanted.”

The New Deal era Federal Writers’ Project produced a famous series of state guides, and the Illinois book in 1939 described Englewood as “a middle-class community with a commercial center second only to the downtown district in magnitude.” Vintage photographs taken at night showed Englewood neon-lighted like a little version of New York’s Times Square. 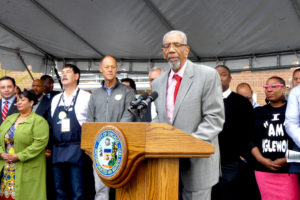 Longtime Congressman Bobby Rush recalled the days when 63rd and Halsted — the hub of Chicago’s Englewood community — was a major commercial hub.

Speakers at the Whole Foods store opening reminisced about this older, thriving Englewood. Bobby Rush, who has represented much of Chicago’s South Side in Congress since 1993, related how his first job was washing dishes for the lunch counter at the S.S. Kresge discount store in Englewood. Chicago Alderman Toni Foulkes noted that she has lived in Englewood for 46 of her 52 years, and she remembers how it still was when she was a child: “It had the Walgreen’s [drug store] and the Jewel [grocery], and I believe the Sears was here. Wiebolt’s [another department store] was across the street.”

But the heavy industry that employed much of Englewood’s African-American majority declined, and the area’s economy declined with it. Population followed: From a peak of nearly 98,000 in the 1960 census, Englewood had fewer than 31,000 residents in 2010, with the greatest decline coming in the 1970s. 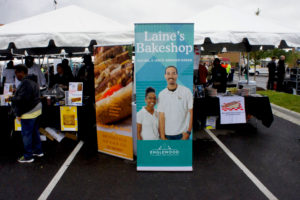 The Opening Day celebration of the Whole Foods Englewood store featured local entrepreneurs whose products are selling in the market. Rachel Bernier-Green of ‘Laine’s Bake Shop was a fellow in the 2015-16 cohort of FamilyFarmed’s Good Food Business Accelerator.

That is why the 100 jobs directly created by the Whole Foods store, and another 100 by the other occupants of Englewood Square, loom so disproportionately large, especially when coupled with the fact that the Whole Foods is stocking products from 35 entrepreneurial startups on the South Side. “Let us also remember that we have a lot of work ahead of us. But now we have an anchor for our work and a foundation to build off of,” Emanuel said.

Or as Foulkes put it, “I watched the fall and the resurrection of this corner in my lifetime.”

It should come as no surprise that food businesses are at the heart of efforts to bring Englewood back. Certainly not to us at FamilyFarmed: A belief that locally and sustainably produced food can be a powerful engine for economic revitalization is one of our key tenets, and that is why so much of our work involves helping farm and food entrepreneurs establish themselves, scale up, and grow their companies and their workforces. The Whole Foods Market company has been a longtime supporter of FamilyFarmed’s programs, including our annual Good Food Festival & Conference and our Good Food Business Accelerator. 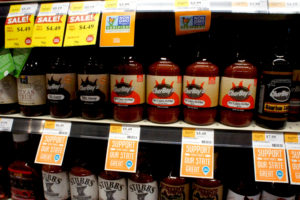 Locally made products are prominently labeled on the shelves of the Whole Foods store.

Much of the emerging economic activity on Chicago’s South Side is food-related. The city’s urban agriculture sector is mostly located on this side of town. The massive Gotham Greens growing operation, located atop a Method soap factory in the Pullman community, is soon to be joined by a Whole Foods Market distribution center that the company is moving from neighboring Indiana.

Even in Englewood, the Whole Foods Market store was preceded, in 2007, by the opening of Kennedy-King College, part of the City Colleges of Chicago, which includes the Washburne Culinary Institute. The school is located directly across the street from Whole Foods.

Whole Foods’ decision to locate here is a bit of a gamble. But Bashaw said he has heard through the grapevine of other businesses developing plans to locate near his new store at 63rd and Halsted.

Pointing to the platform on which the grand opening ceremony was held, Bashaw said, “I guarantee you, if you were on that stage five years from now and you were looking out, you would see that corner transformed.” 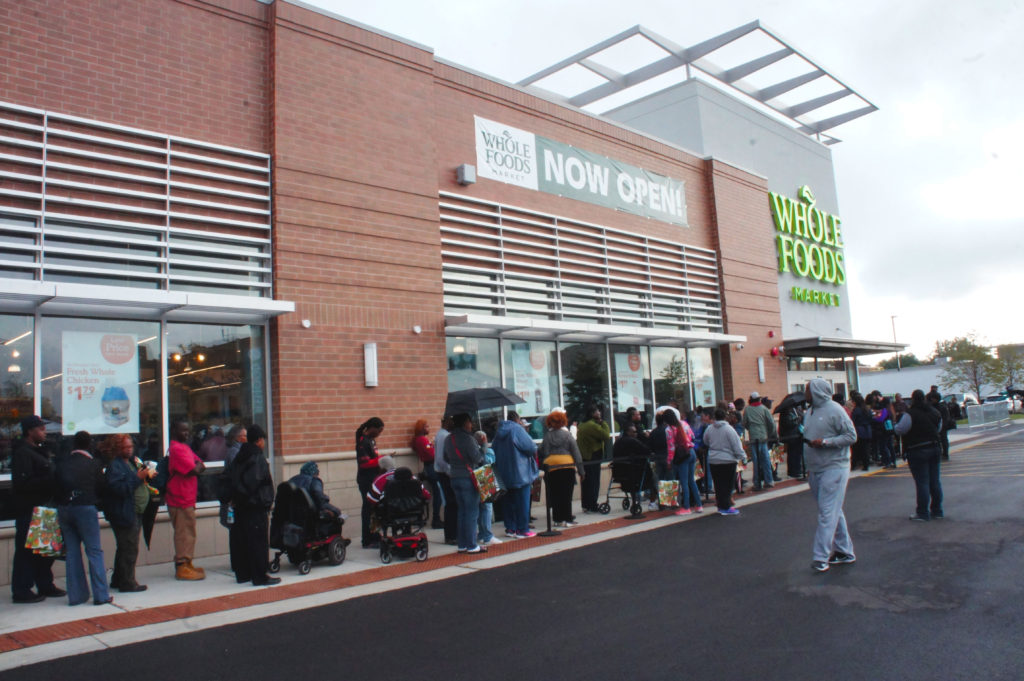 A long line of shoppers, most from the surrounding neighborhood, turned out for the opening of the Englewood store.