Though hard cider still makes up a relatively small percentage of the overall U.S. adult beverage market, it has for several years been one of its fastest-growing sectors.

This is evident in sales data, the increasing shelf space devoted by stores to cider, and by cider’s increased presence in tavern tap lines and coolers. There are even a handful of bars across the country — such as Chicago’s The Northman — whose drink menus focus mostly or entirely on cider. 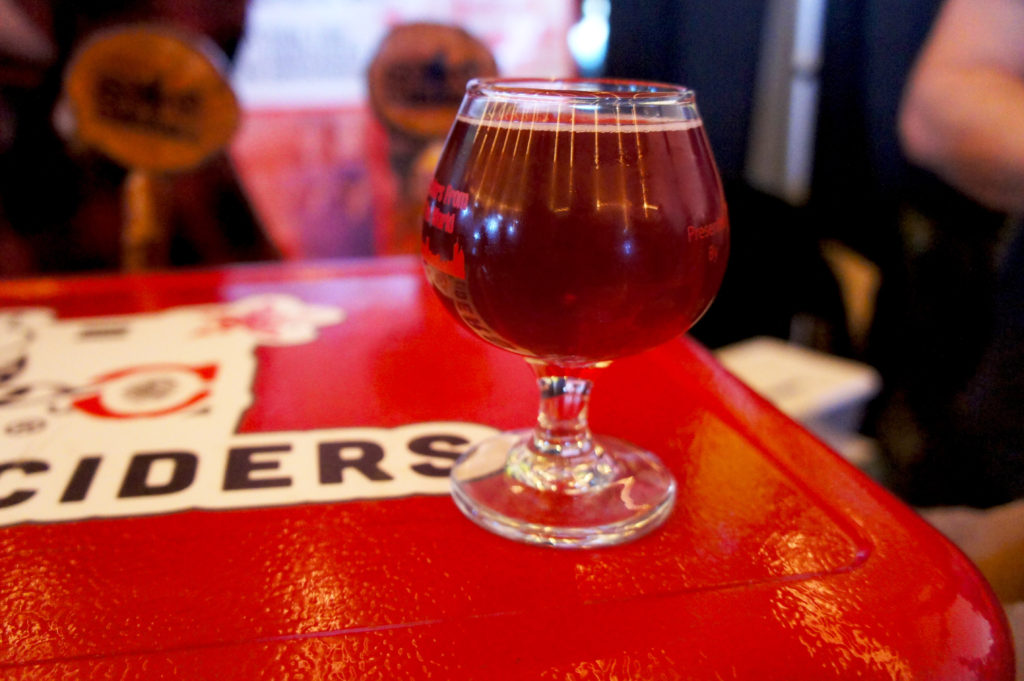 The growing interest in cider is brought to life by events such as Chicago’s annual Cider Summit, which was held Feb. 11 on Navy Pier. The events drew hundreds of enthusiasts to each of two four-hour sessions. Once easily contained on the main floor of Navy Pier‘s Aon Grand Ballroom, its sampling stations have now worked their way up to the balcony. 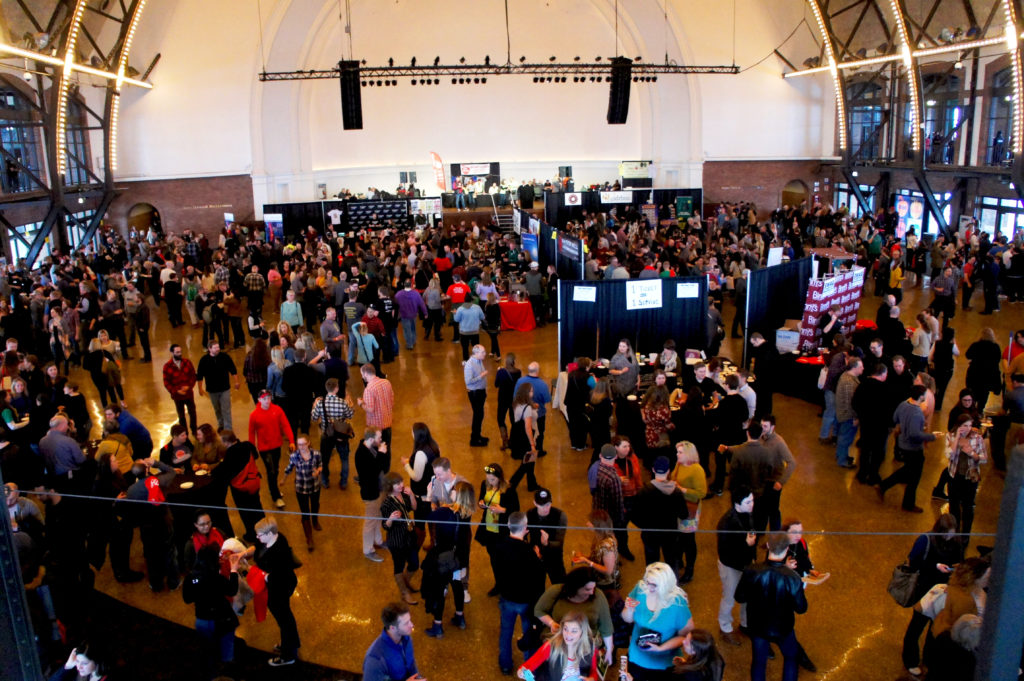 And while FamilyFarmed regards craft cider as part of the Good Food movement, it was gratifying to see — while making the tasting rounds — that more and more producers are wearing their local and sustainable values on their sleeves. 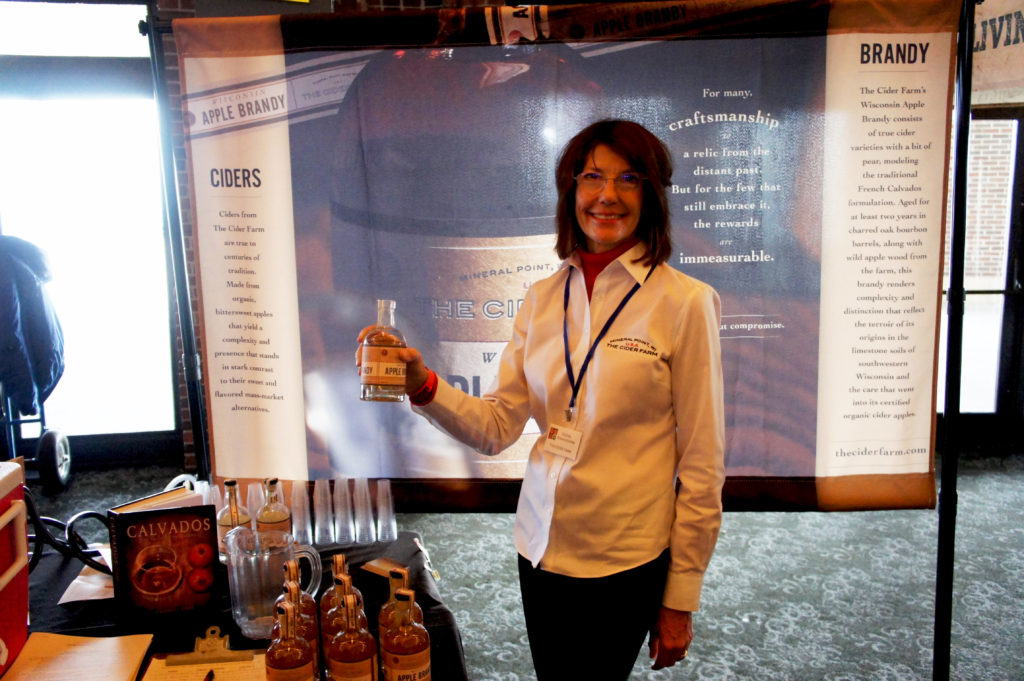 In fact, The Cider Farm of Mineral Point, Wisconsin, holds these values so highly in its apple growing, and in its production of cider and a Calvados-style apple brandy, that its owners — Deirdre Birmingham (above) and husband John Biondi — are graduates of FamilyFarmed’s Good Food Business Accelerator.

The Cider Farm’s orchards produce organic apples of the traditional British cider varieties. These are not eating apples… too tart and bitter… but they make a beautiful cider. 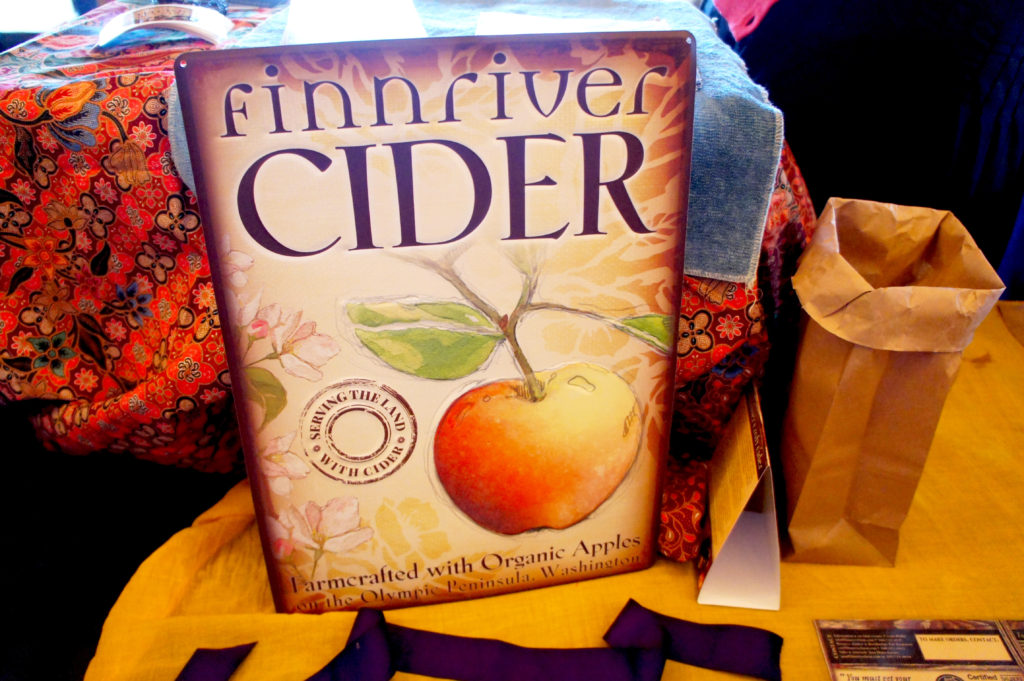 Finnriver Cider of Chimacum, Washington, boasts that its products are “farmcrafted with organic apples from the Olympic Peninsula. Its slogan is “Serving the land with cider.” Finn River is also a Certified B Corporation, which means they meet “rigorous standards of social and environmental performance, accountability, and transparency.” 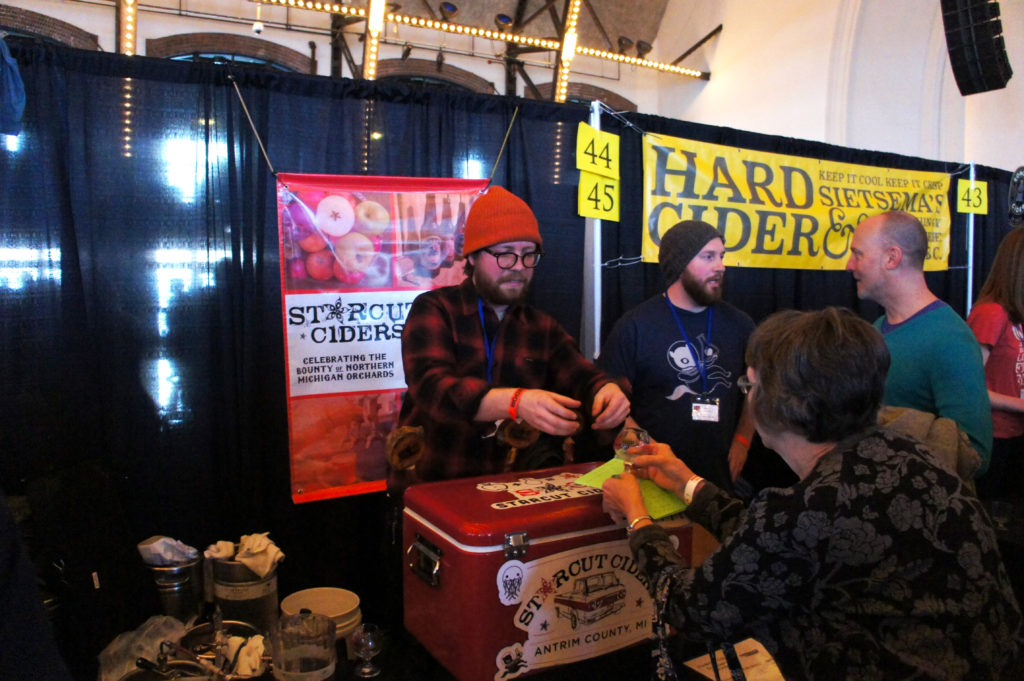 Michigan has the second largest number of cider producers among the states, trailing only New York. Two cideries from Michigan’s Lower Peninsula had neighboring tables at the Chicago Cider Summit, but different approaches to local sourcing.

Sietsema of Ada — located in west-central Michigan near Grand Rapids — grows its own heirloom and culinary apples in family orchards established in 1934. Starcut Cider of Elk Rapids, in the northwest part of lower Michigan, was established by Short’s Brewing Company (a well-known craft brewer) in 2014, and works closely with local growers to encourage them to grow a range of cider apples. 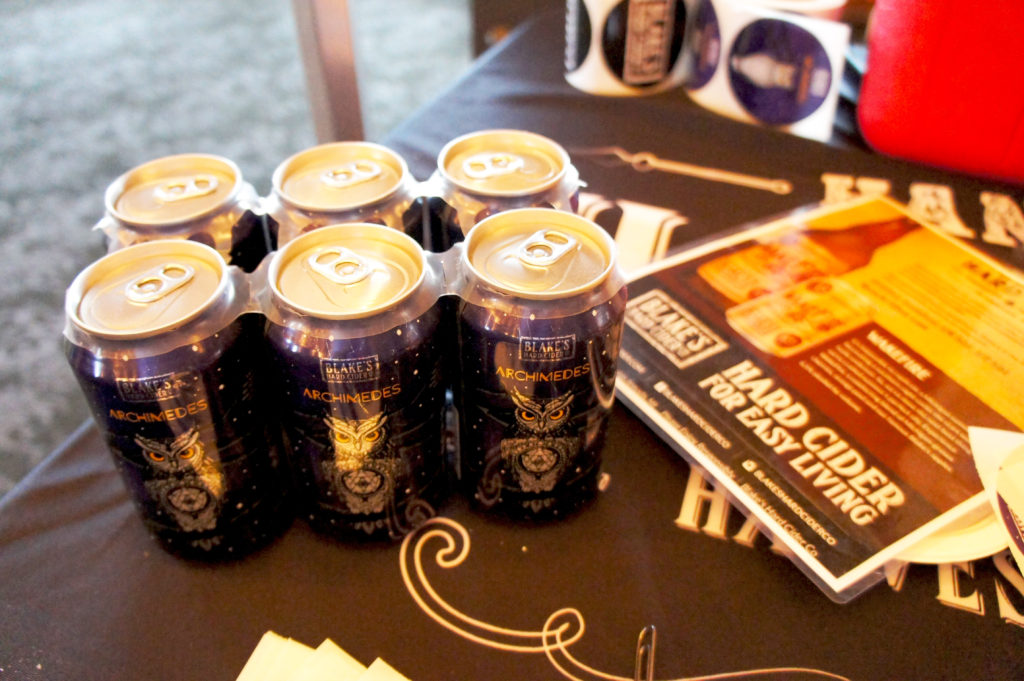 Blake’s Hard Cider of Armada, Michigan, about 45 miles north of Detroit, grows its own apples in a 69-year-old orchard. It is also among the growing number of cider makers that are adding other fruits and botanicals to their beverages. The Archimedes, shown here, is apple cider flavored with vanilla and elderberry. Its WakeFire contains Michigan cherries and orange peel; its El Chavo is spiced up with habenero pepper and mango. 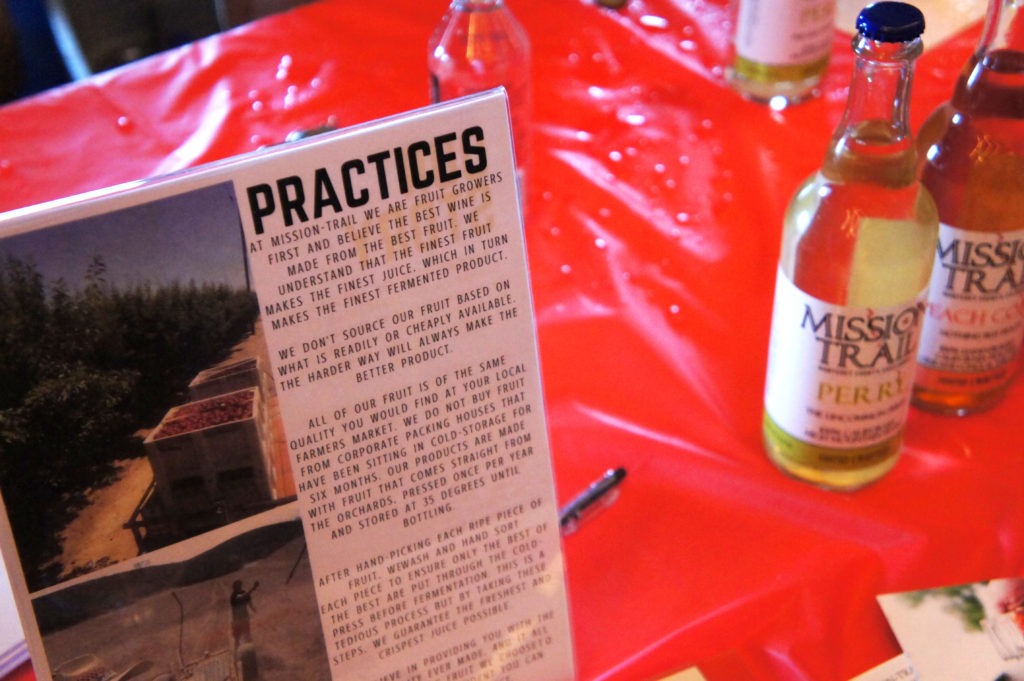 Mission-Trail of Bradley, California, has a niche, as it is one of the few cideries that emphasize other fruit — peaches, plums, pears — over apples. Its tasting table including a placard touting its sustainable practices, saying in part, “All of our fruit is of the same quality you would find at your local farmers market. We do not buy fruit from corporate packing houses that have been sitting in cold storage for six months.” 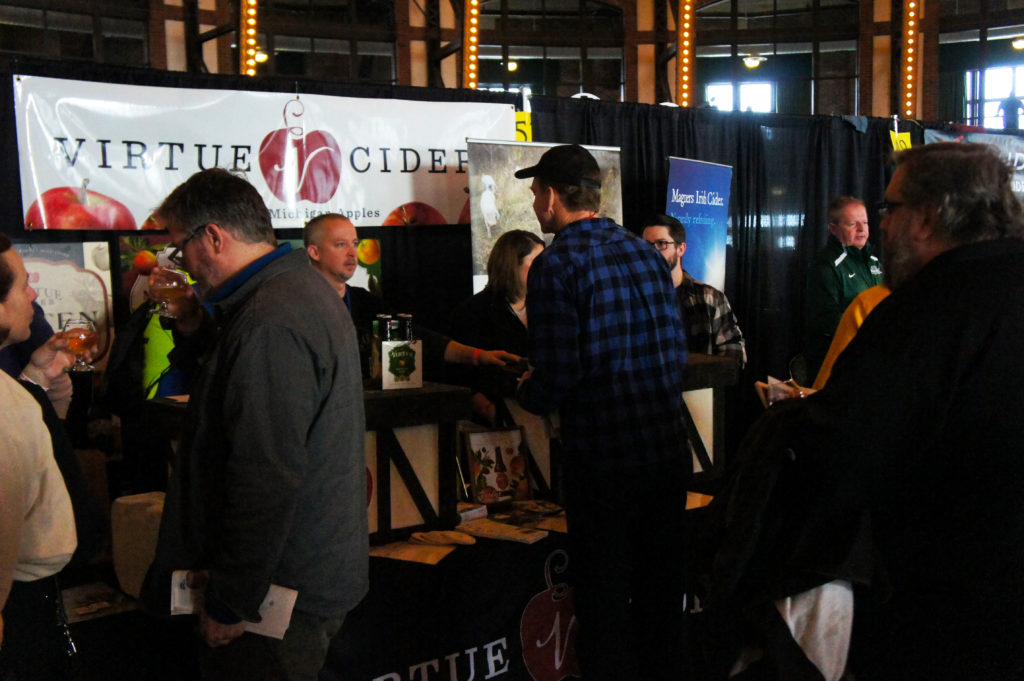 As with other Good Food sectors, successful cider producers are drawing increasing attention from bigger food and beverage companies. Virtue Cider of Fennville, Michigan, was founded by Gregory Hall after Goose Island, the Chicago craft beer maker where he had long been brewmaster, was sold to Anheuser Busch. But Anheuser Busch, in 2015, also bought a majority stake in Virtue.

All photographs by Bob Benenson/FamilyFarmed