The Good Food Festival, which takes place on Saturday, March 18, is FamilyFarmed‘s annual public celebration of the fast-growing Good Food movement — and this year, for the first time, admission is free!

There is also time for farm and food businesses to sign up as exhibitors and vendors for the Friday and Saturday programs. If you are interested in reaching a coveted audience of trade buyers, sellers, investors and consumers, please click here for more information.

Please enjoy… and share… the following story about our 2017 Good Food Chef of the Year Award and our Chefs at Play programming.

Legions of fans have packed Chicago’s Honey Butter Fried Chicken since its 2013 opening, and they might say it merits FamilyFarmed’s Good Food Chef of the Year Award for its delicious food alone.

But the reasons why chef-owners Christine Cikowski and Josh Kulp will be co-honored — and then conduct a chef demo — at our Good Food Festival on Saturday, March 18 go much deeper.

Cikowski and Kulp have practiced sustainable and local sourcing since they launched Honey Butter Fried Chicken, after first establishing themselves with their ongoing Sunday Dinner Club (located just above the restaurant in the city’s Avondale neighborhood). 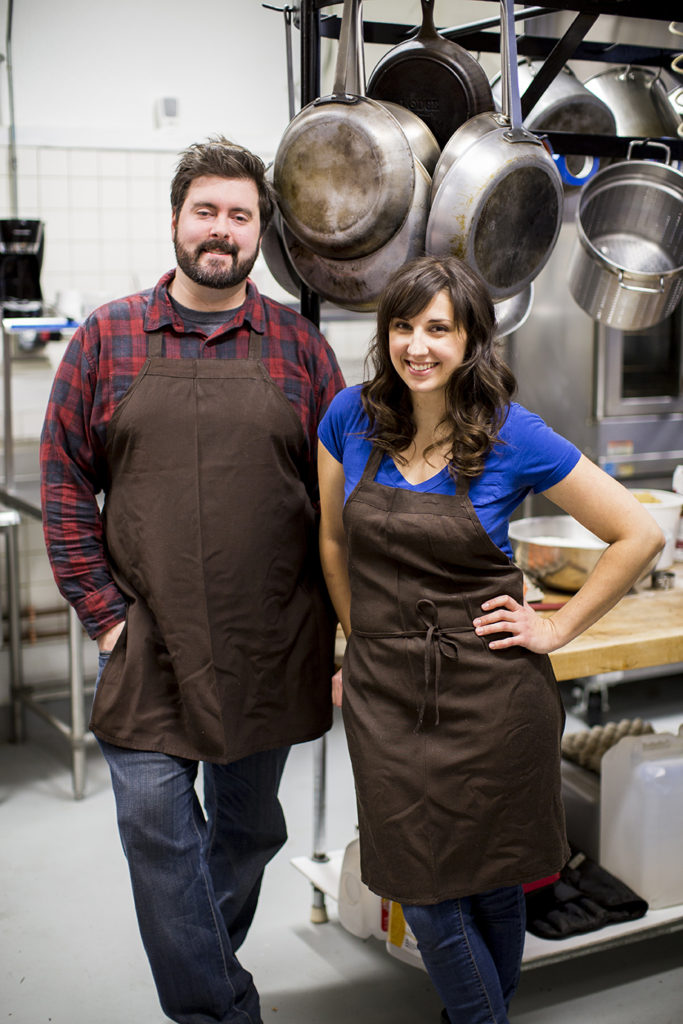 Good Food sourcing is no easy thing for fine-dining farm to table restaurants to do, and even more challenging for fast-casual restaurants that work at higher volumes. Yet Cikowski and Kulp, who became friends while studying culinary arts at Chicago’s Kendall College, have stuck to their devotion to sustainability by purchasing Amish-grown chickens from Indiana and fresh local produce, often visiting local farmers markets for ingredients and new ideas. 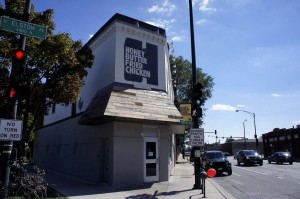 Honey Butter Fried Chicken is located in Chicago’s Avondale neigborhood at the corner of Elston and Roscoe. Photo: Bob Benenson/FamilyFarmed

But there is even more to it. Cikowski and Kulp are young leaders in the local chef activist community, and their strong social values are integrated into how they do business. They practice fair and inclusive policies toward their employees, and in January, they made Honey Butter Fried Chicken the first of now several places in Chicago to call itself a “Sanctuary Restaurant.”

Restaurant Opportunities Center (ROC) United, which advocates for better restaurant wages and working conditions, started the national Sanctuary Restaurant campaign out of concern for the status of immigrant workers in a changing political environment. It defines Sanctuary Restaurants as those that “do not allow harassment of individuals based on immigrant or refugee status or race, religion, gender or sexual orientation” and “participate in peer networks to exchange ideas for protecting targeted workers.”

Good Food on Every Table wrote about Honey Butter Fried Chicken just before the restaurant opened in September 2013, and again in 2014 as the owners discussed their successful first year.

And this year’s Good Food Festival will be a return engagement for Cikowski and Kulp, who shared the Chefs at Play stage in 2016 with famed chef-restaurateur Paul Kahan — our 2016 Good Food Chef of the Year — in a demo that promoted Pilot Light, a program in which they are all involved that works to integrate food education into the curriculum at Chicago Public Schools. 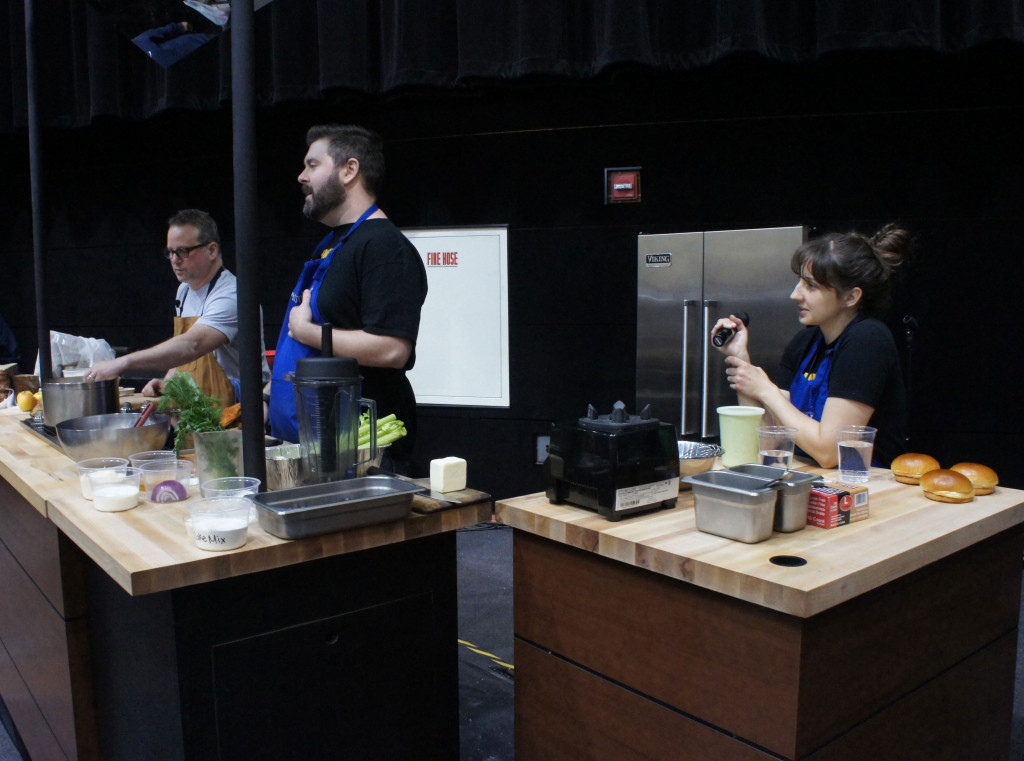 Chefs at Play: Stay All Day

The Chef of the Year Award will takes place at 10:30 a.m., followed immediately by the Honey Butter Fried Chicken demo that will run until 11:15. That will kick off our first day-long Chefs at Play program, which will continue until just before the Festival concludes at 5 p.m. 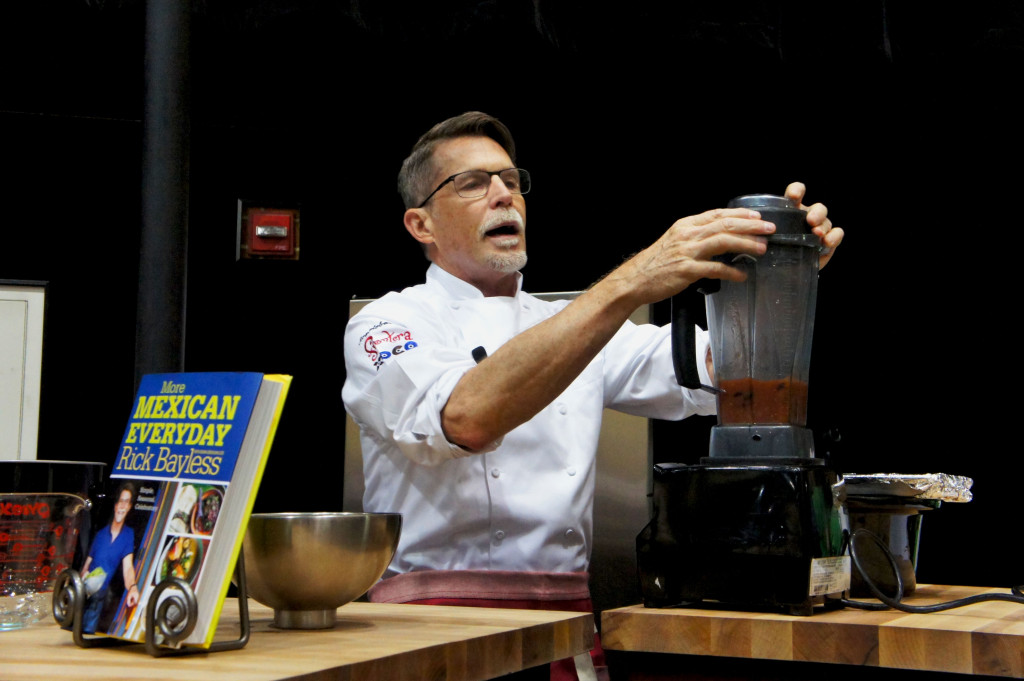 The Chefs at Play will include longtime favorites at the Good Food Festival. One of these is Rick Bayless, whose Frontera Farmer Foundation is collaborating with FamilyFarmed on a major fundraising event on April 30 at the Art Institute of Chicago: The Frontera 30th Anniversary Celebration, marking the 30th anniversary of Bayless’ landmark Frontera Grill.

Bayless will also take part in a panel discussion, titled “Does Good Food Need to Be Local?” that will take place at 9:15 a.m. on Friday, March 17 during our Good Food Trade Show and Policy Conference, the middle day of our three-day Good Food Festival & Conference. 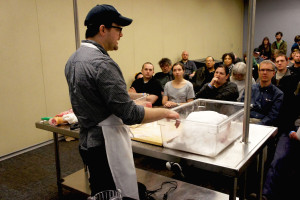 Also familiar to Festival-goers is Rob Levitt, the head butcher and owner at Chicago’s The Butcher & Larder at Local Foods. After several years of doing meat-related workshops at the Festival, Rob will dust off the chef’s hat that he wore for many years before opening The Butcher & Larder (at a different location) in 2011.

There also will be plenty of new programming and new faces on the Chef’s Stage. The rundown:

11:30-11:50 a.m.: Purple Asparagus with Tom Van Lente. Purple Asparagus, which brings fun food education programs into schools, has long been involved in the Good Food Festival’s family-friendly programming. This year, they take to the stage with Chef Tom Van Lente of The Winchester restaurant in Ukrainian Village.

Noon-12:45 p.m.: The Artisan Grain Collaborative. The Artisan Grain Collaborative will showcase and demonstrate the process of milling locally grown wheat — and baking a sourdough bread! We will present an up-close opportunity to see and learn the traditional methods of stone milling wheat into flour, and using that flour to bake a healthy and locally sourced loaf of artisan bread.

1-1:45 p.m.: Aaron Lirette, Green River. This restaurant in downtown’s Streeterville neighborhood opened in 2015 and made its first splash with its mixology program. But the excellent cooking by Lirette and his team soon received the attention it deserved from diners — and from the Michelin restaurant guide, which gave Green River a coveted star. Green River‘s website says Lirette’s “culinary philosophy stems from his commitment to working with local purveyors.”

The Chefs at Play stage is located in the UIC Forum’s main Exhibit Hall, and for the first time extends to nearly the closing time for the Festival. We hope this will encourage attendees to spend extra time visiting our awesome exhibitors and vendors — many of whom will have great products for you to buy and take home. Do your grocery shopping at the Good Food Festival!