Imagine this school incorporating local citizenship, sustainability, Good Food, social justice and other values into its curriculum… serving organic, locally sourced, made-from-scratch food in its cafeteria… and producing more energy than it uses.

Then imagine this school is not in an upscale Chicago neighborhood or tony suburb, but rather on the industrial, mostly Hispanic, mostly low-income Southwest Side.

That is the vision for the expansion of the Academy for Global Citizenship — for which the charter school will raise money at its 5th Annual Chefs Playground on Friday evening (June 9) at the Art Institute of Chicago’s Griffin Court. 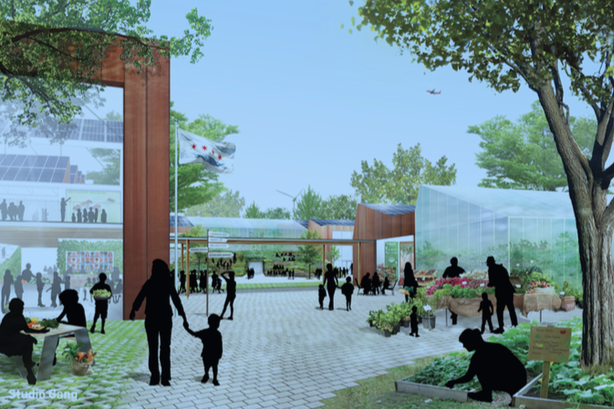 The plans for the Academy for Global Citizenship’s new campus in Chicago will integrate innovative learning spacing with three acres of greenhouses, hoop houses and other growing areas. The design was created by the firm of famed Chicago architect Jeanne Gang. Source: AGC

This tasting event features a spectacular array of leading chefs, including Rick Bayless, whose Frontera Farmer Foundation co-produced the Frontera 30th Anniversary Celebration with FamilyFarmed at the same location on April 30. That event generated more than $140,000 in proceeds for the efforts by the two non-profit organizations to work with farmers and entrepreneurs to help build a better food system.

Tony Mantuano of Spiaggia fame is the host chef for the event. To see the full chef lineup and to purchase tickets, click here.

The number of chefs participating in AGC’s fundraiser underscores how the event has grown. “We have twice as many chefs as we did in our first year,” said Katherine Elmer-DeWitt, the Academy for Global Citizenship’s External Initiatives Manager. “We started with 15, we have over 30 now, all coming together to generously contribute their time to celebrate Good Food in public schools.”

The proceeds from the event will go toward moving AGC closer to breaking ground on the new campus — to be located on the vacant site of a former city housing project — but mainly help cover current expenses (the school needs to raise 25 percent of its budget each year). Among these is the gap between what AGC receives in funding from the financially stressed Chicago Public Schools system and the cost of feeding Good Food to the children every day. 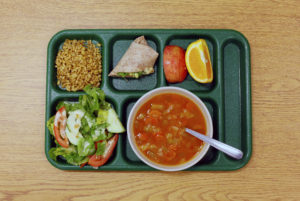 “Our food program is a pilot within the Chicago Public Schools, 100 percent organic, scratch-made, as local as can be, zero waste,” Katherine said. “We are primarily supported by the City of Chicago for that, but we need to chip in a little for the premium on organic and scratch, and that difference is about $250 a student per year… Every individual coming to this event makes a tremendous difference for our budget, now more than ever amid cuts across the district.”

The new campus will enable AGC to use substantial amounts of food grown on-site to help alleviate those cafeteria costs. Three acres of agriculture would make the Academy of Global Citizenship one of the biggest farms in Chicago.

Much of the growing will take place under the rudimentary cover of hoop houses, on which the school has worked with Erika Allen of Growing Power — the pioneering urban agriculture organization founded in Milwaukee by her father Will Allen. 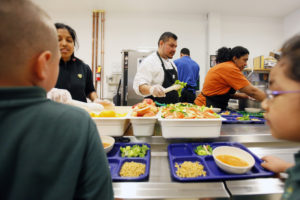 The food served to children at the Academy for Global Citizenship is organic and made from scratch. Photo by J.Geil provided by AGC.

There also will be two permanent greenhouses. One is the Learning Greenhouse, which Katherine described as the place “where students will tinker and experiment and learn about the food cycle, along with producing some microgreens, primarily for consumption.” The other will be a production greenhouse managed by a farm partner. There also will be a farm stand “so our community can have a CSA program, can purchase produce and healthy foods and have a parent hub, a place to sit and have a cup of tea or coffee and chat.”

Inside the classrooms, the ambitious and progressive curriculum will continue to expand up the vision of young education innovator Sarah Elizabeth Ippel, who persisted in her efforts to persuade Chicago Public Schools to authorize her truly unconventional charter school. Sarah, now based out of Seattle, maintains the role of Executive Chairman, while the school’s day to day operations and planning are headed by Amy Liszt, the President and Executive Director.

The school’s agenda would be ambitious in any location, but more so in an underserved community near Midway Airport where, according to Katherine, the student body is 70 percent low-income, 90 percent minority, 30 percent English language learners, and 12 to 18 percent special needs students. 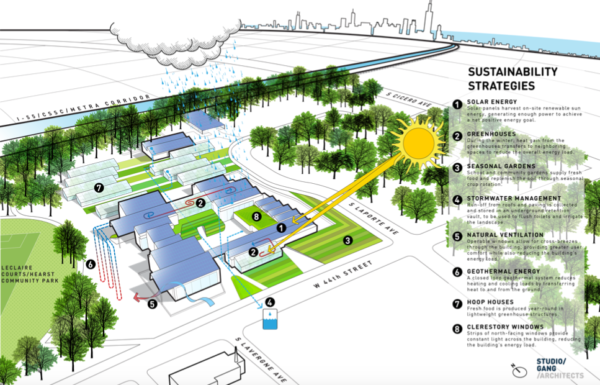 This diagram shows how solar panels, geothermal energy and greenhouses will make the new Academy for Global Citizenship campus “net-positive” — meaning it will produce more energy than it uses — and pinpoints other planned sustainability strategies. It also shows the location of the campus, about 10 miles from downtown Chicago and just south of Interstate 55 (the Stevenson Expressway).

“What we’re trying to show here with this model is incorporating local citizenship, sustainability, Good Food, social justice, all of those things, they are not an added challenge. They are what makes it accessible for students. The conceptual nature of our curriculum is how 21st century students are engaged,” said Katherine, adding, “We’re talking about things that are relevant to their lives.”

And it is a school, after all. So maybe the new campus will someday have a “chefs playground” all of its own.